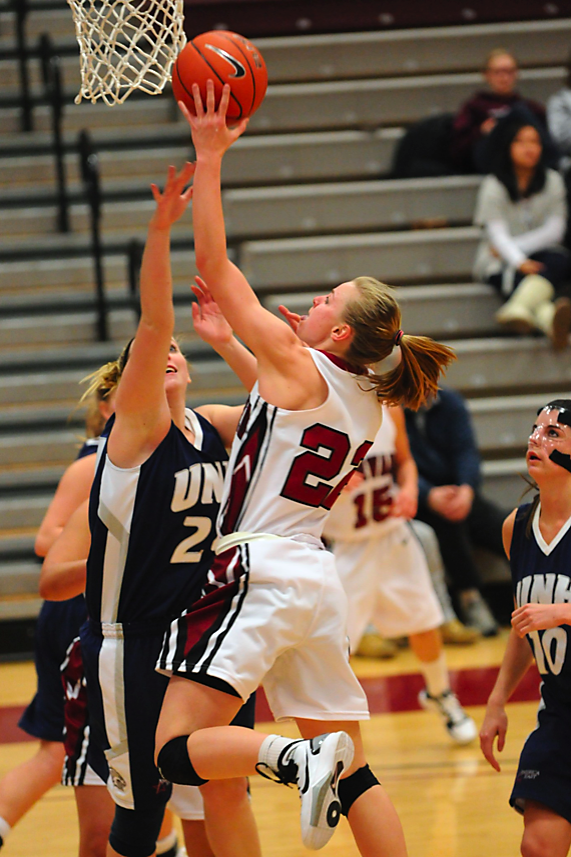 Harvard freshman Christine Clark, shown here in earlier action against UNH, was one of five players in double digits against Boston College. The Crimson lost the matchup, 80-78.
By Patrick Galvin, Crimson Staff Writer

Boston College took Harvard women’s basketball back to the basics last night at Conte Forum and taught the Crimson a tough lesson about the importance of rebounding.

Eagles’ center Carolyn Swords drove the message home when she scored in the final seconds off of a rebound and claimed an 80-78 victory for Boston College (13-2), who out-rebounded Harvard (6-6) throughout the contest.

“Unfortunately, [Swords] got the rebound and put it in,” junior co-captain Christine Matera said. “It’s pretty much what we expected—it was kind of the theme of the [game].”

Compared to the Eagles’ 42 rebounds, Harvard struggled to grab the ball off the boards, earning 29 rebounds—only nine of which were on offense.

“We had minimal turnovers and were very cohesive throughout the game…it’s our rebounding that got us in the end,” junior co-captain Jackie Alemany said.

Boston College scored 17 points off rebounds in the first half alone with much help from the statures of Swords and senior forward Stephanie Murphy, who together have an average height of 6’5”.

“Once we did start rebounding, Swords and Murphy are two very tall girls and they just reached over us,” Alemany said. “And, because we were so busy boxing out the forwards, [freshman guard Kristen Doherty] got to us, too.”

Aside from the stark difference in rebounds, both teams had fairly similar numbers across the board by the end of the night, proving to be an even match-up.

The cross-town rivalry seemed like it was played in quarters: the Crimson commanded the court in the first and final minutes of the game, and it was unable to overcome the 31-9 effort put up by the Eagles immediately before and after halftime.

“It’s definitely a disappointing loss, but I’m really proud of the way our team fought and battled for the full 40 minutes,” junior co-captain Jackie Alemany said. “Last night was the best game we’ve played yet as a team.”

Harvard pushed to a 33-26 lead with 3:35 left in the first half by sticking to the fundamentals of the well-balanced offense that has come to characterize the Crimson’s playing style.

Especially at the start of the game, Harvard—led by junior Brogan Berry’s 17 points and six assists—did an excellent job of sharing the ball, as shown by the double-digit scoring efforts of five players.

The Crimson maintained its effective offensive scheme, but in the closing minutes before halftime, the team’s diamond-and-one—following Swords—and two-three defensive formations began to break down as the team’s energy faltered.

This allowed Boston College to rally back from a seven-point deficit and eventually knot up the score at 38 in the final minutes of the opening stanza.

“We had a few transition issues when they went on that run,” Alemany said. “We didn’t match up well or run back quickly enough. Swords got too many transition shots where she just ran across the lanes and made her favorite lucky hook-shot layup.”

Despite a late jumper from Alemany just before the break, the Eagles’ offense didn’t skip a beat entering the second half. Coach Sylvia Crawley and her team added to their 14-5 run in the first with an additional 17-4 run to open the first six minutes of final frame and reclaim a commanding lead of 55-44.

After the Crimson’s three-minute scoring drought, a basket from sophomore Miriam Rutzen with 13:49 remaining sparked Harvard’s offensive revival, helping the Crimson claim an impressive 16-3 run of its own to close the scoring deficit, 60-58.

“BC wasn’t the best defensive team, so we knew we could drive to the basket and we did a good job of finding the open players,” Alemany said.

Eventually, Boston College’s inside game and ability to dump it to Swords—who finished with 28 points—proved triumphant over the Harvard’s ability to thwart the defensive trap at the end of the game.

Both teams traded leads until Swords’ buzzer-beater gave the Eagles the only one that mattered.

“It was a positive game for us, even though we fell short by two points,” Matera said. “If we play like we did last night against…[any] Ivy League team, we can come out on top. This is looking good going into conference.”