Harvard students and alumni were among the protesters 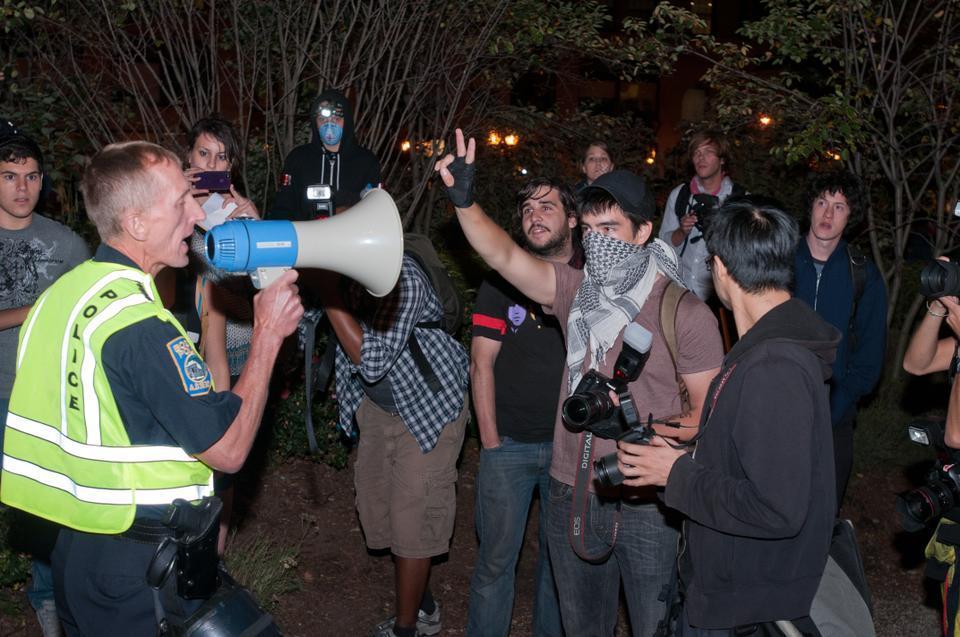 A Boston police officer gives protesters a 30 second warning to vacate the park before facing arrest. In his path stands a defiant member of the protest.
By Jose A. DelReal, Crimson Staff Writer

BOSTON—Boston police arrested 129 protesters affiliated with the Occupy Boston movement, including at least five Harvard students and alumni, in a swift raid on Dewey Square in the early-morning hours on Tuesday.

On Monday, a second tent city emerged in a northern part of Dewey Square, which is adjacent to South Station, and this new camp reportedly drew the attention of city officials for lacking necessary permits.

Statements by Boston Mayor Thomas M. Menino on Sunday indicated that the protests would soon be required to disband. On Monday, the Boston Police Department released a statement saying it respects the right to protest peacefully, and insisted that protesters could stay in Dewey Square but could not occupy the adjacent park. Tuesday morning’s arrests occurred in the park.

Anxieties mounted in the camp late Monday night before police officers arrived, as rumors spread across the Dewey Square occupation through word of mouth and social media that officers were on their way to force protesters to leave.

By 12:30 a.m. on Tuesday, only a small group of police officers were stationed at the scene. But by 1:00 a.m., police officers began to collect around the square and position themselves at different corners of the camp.

Despite growing apprehension, some protesters attempted to maintain the good-humored attitude that defined Dewey Square during the day. One group gathered in a circle and sang “Let It Be” by The Beatles.

Before police blocked off the roads, the protesters were occasionally encouraged by passing cars honking in support. On the outskirts of the camp, EMT ambulances arrived as the police presence quietly grew.

Kate R. Fielding, a Boston resident, expressed a desire for the protest to remain peaceful.

“My friend and I started participating last night. When we came today, we heard that police were coming to break things up,” said Fielding. “We don’t want that to happen. We just want a peaceful protest.”

At 1:40 a.m., about 100 police officers dressed in riot gear and carrying billy clubs joined the other 100 officers already on the scene, lining up in two rows at the corner of the new camp.

Boston Police Superintendent William Evans notified demonstrators with a bullhorn that those who refused to leave within two minutes would be arrested. After between five to ten minutes, officers forcibly broke through a line of protesters and began making arrests.

Jackson F. Cashion ’13, in the north park area when the police arrived, described the showdown as incredibly tense. “For a while, it wasn’t clear where the police were going to come from. It seemed like the police were emerging from all sides,” Cashion said. “I was on the edge, and I wanted to avoid getting arrested. I was scared.”

Samuel B. Novey ’11 was in Dewey Square when the police arrived. He described the police action as hostile.

“The police circled the whole [camp], and they pushed right through the line. Instead of peacefully arresting folks, they broke the line with force,” Novey said. “It was very aggressive police action.”

Protesters affiliated with a group known as Veterans for Peace, an anti-war group, linked arms at the forefront of the line of protesters. Videos posted on the internet show Boston police officers pushing members of this group to the ground as they broke through lines of protesters that had linked arms with one another.

“I would say [the police] used excessive force. The veterans by and large were older citizens, and [knocking them down] seemed completely unnecessary to me,” said Tara D. Venkatraman ’11. “One friend I was with was choked by two officers and restrained even though he was just chanting and not resisting.”

At different moments, groups of people could be seen running away from the epicenter of the arrests. One girl was held face-down while she was handcuffed before being dragged away by police officers.

Joshua S. Bryant, a student at Clark University in Worcester, Mass., was in the camp when police members began destroying the tents. “The police were hitting people pretty hard,” Bryant said. “They just came in and started stomping on the tents. It’s disgusting.”

Some officers encouraged protesters to move back to the original Dewey Square camp, indicating that arrests would not be made there.

Cashion, a member of The Crimson’s editorial board, acknowledged that officers gave protesters adequate time to leave the camp before arrests were made. In addition to a 10-minute warning, members of the Boston Police Department distributed flyers earlier in the night informing demonstrators of their right to free speech, but also explaining the penalties for unlawful gathers and trespassing.

Still, many demonstrators felt that their right to assemble was being violated by being asked to leave. Bryant said that while many of the officers remained cordial, many were overly aggressive.

Samuel J. Bakkila ’11-’12 described the scene as chaotic. “The protesters remained peaceful throughout the entire course of the protest, chanting ‘This is a peaceful protest!’ even as their friends were being overpowered, handcuffed, and forced into police trucks,” Bakkila said.

During the arrests, officers in many cases used force, handcuffing protestors too tightly according to some and shoving protesters to the ground. “A large number of the plastic handcuffs were deployed recklessly, [and were] put on so tight that they severely restricted circulation,” said Bakkila. “I actually watched my hands turn blue while the sympathetic police around me didn’t have the proper tools to cut my handcuffs off.”

“When one protester in my group was making his bail call, one of the police officers joked that he needed to hurry up because ‘The beatings start at 4:30!’” Bakkila said.

It is currently unclear who posted bail for many of the protesters, but Bakkila stated that “someone representing Occupy Boston” took care of payment before he was released at 7 a.m. Tuesday morning. The case will be heard on Wednesday.

While many argue that officers were far too aggressive, others charge the protesters were provoking officers by shouting at them and refusing to comply with orders. As officers began arresting protesters, those watching began to shout, “Shame! Shame!” and “Who do you serve? Who do you protect?” at the police.

In an interview with the Boston Globe, Boston police spokeswoman Elaine Driscoll defended the Boston Police Department, saying that officers reacted appropriately. “We have been very accommodating to everyone’s right to demonstrate peaceably,” she said. “But when unpredictability starts to enter the scenario, we are obligated to maintain public order and protect public safety.”

A post on the Boston Police Department’s Twitter account says that the BPD supports peaceful protests but is obligated to maintain order and ensure a safe environment.

By 2:30 a.m., after the park was completely cleared out, a blockade of 20 police motorcycles gathered in front of Dewey Square in an apparent attempt to pressure protesters still watching from the outskirts of the park.

After clearing the park of protesters, city sanitation workers arrived on the scene with garbage trucks and loaded left-behind equipment, including tents and medical supplies, into their vehicles.

Throughout the night, Twitter was ablaze with messages documenting the protest and subsequent arrests in real-time. While the social networking tool helped protesters communicate with one another, there were also many false rumors circulating on Twitter throughout the night. At one point, there was widespread talk on the site that reporters had been asked to leave the area, which was not the case.

—Staff writer Jose DelReal can be reached at jdelreal@college.harvard.edu.