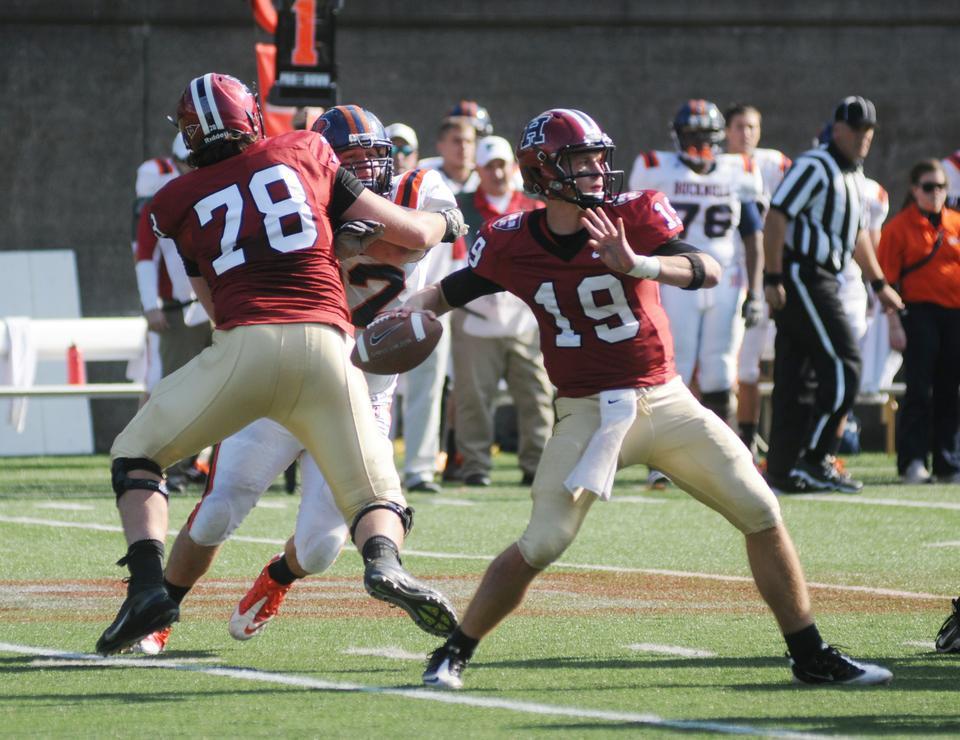 Coming into Saturday’s game, the question of who would start at quarterback loomed large over Harvard football.

But junior Colton Chapple provided the answer, coming up big in his fourth consecutive start of the year.

In just over two quarters of play—Chapple was pulled early in the third quarter when Harvard led by 35—the junior quarterback had a performance that landed him in the Crimson’s history books for the second straight week.

Chapple’s five touchdowns tied for the most ever by a Harvard passer in a single game. The first and only other time it happened was in 1953, 544 games ago.

Chapple is also the first quarterback in program history to throw for four touchdowns in back-to-back games.

“Just to be mentioned with some of those guys is unbelievable—so humbling,” Chapple said of the school records. “But I can’t take some of the credit for all that. My offensive line has played great all year long. I have an extremely talented wide receiver core, including tight ends.”

After a prolific first half, sophomore Michael Pruneau came into the game rather than senior Collier Winters, the starter at the beginning of the season who appears to have lost that job to Chapple.

“I told Collier to warm up at halftime, [and] I said I’ll make a decision when we get going,” Harvard coach Tim Murphy said of his decision to sit Winters during the second half. “It just came down to [the fact that] he’s coming off a hamstring injury, [and] he hadn’t done anything in about an hour and a half. There was more to lose than there was to gain by putting him in there.”

Harvard’s offense wasn’t the only dominant element of its game. The Crimson controlled on all fronts, nearly holding the Bison scoreless.

At halftime, Bucknell had just 31 yards of total offense, and the team finished the game with -5 net rushing yards.

The Bison offensive line looked outmatched, to say the least. On a number of occasions, Harvard’s defensive linemen were able to apply pressure to Wesley despite being double-teamed.

“We came into this game, and we wanted to keep it pretty simple on defense,” said captain Alex Gedeon, who led the team with 11 tackles. “Line up and just be physical up front. I think we were successful in doing that all day, and it starts with the D-line.”

On one particularly bizarre play, the Crimson recovered a loose ball on a squib that trickled into the red zone, giving Harvard excellent field position. Chapple took advantage, scoring just over a minute into the drive.

“[The ball] bounced around a little bit. I was coming from the outside, and it kind of just squirted out,” Gedeon said of the recovered kick. “A couple of our guys got down there and hit the Bucknell guy trying to pick it up and I was able just to fall on the ball.”

The Crimson had a sloppy start to the game. Just two plays in, junior running back Treavor Scales fumbled on the Harvard 29, giving the Bison excellent field position about three minutes in.

But after an unsuccessful fourth-down conversion, Harvard got the ball back and controlled the pace of the game, though it didn’t score until the end of the quarter. With no time on the clock in the first, Chapple hit junior tight end Kyle Juszczyk in the end zone to give Harvard the 7-0 edge.

“We had been running slants in the first half and ... the safety bit right away, as soon as I made my slant cut,” Juszczyk said. “We just went over the top ... You always getting a little nervous when the ball is hanging in the air there, and you see the defender chasing you.”

But two touchdowns early in the second quarter—a 27-yard pass to senior wide receiver Alex Sarkisian and a 9-yarder to sophomore tight end Cameron Brate set up by the recovered squib kick—put the game out of reach early on.

Both tight ends added second touchdown catches later in the game, and Juszczyk’s reception five minutes into the quarter all but sealed the win. Bucknell only managed to avoid a shutout when Bison defensive back Bryce Robertson brought a Pruneau interception to the Harvard two-yard line, setting up a field goal with three minutes left in the third.

“This is a team we felt we should have beat, but nevertheless came in with a great deal of focus and intensity right from the start, led by our defense,” Murphy said. “Our defense never gave them a chance today.”