In legendary coach Harry Parker’s 50th season, the Harvard men’s varsity eight beat its competition at the 47th Head of the Charles 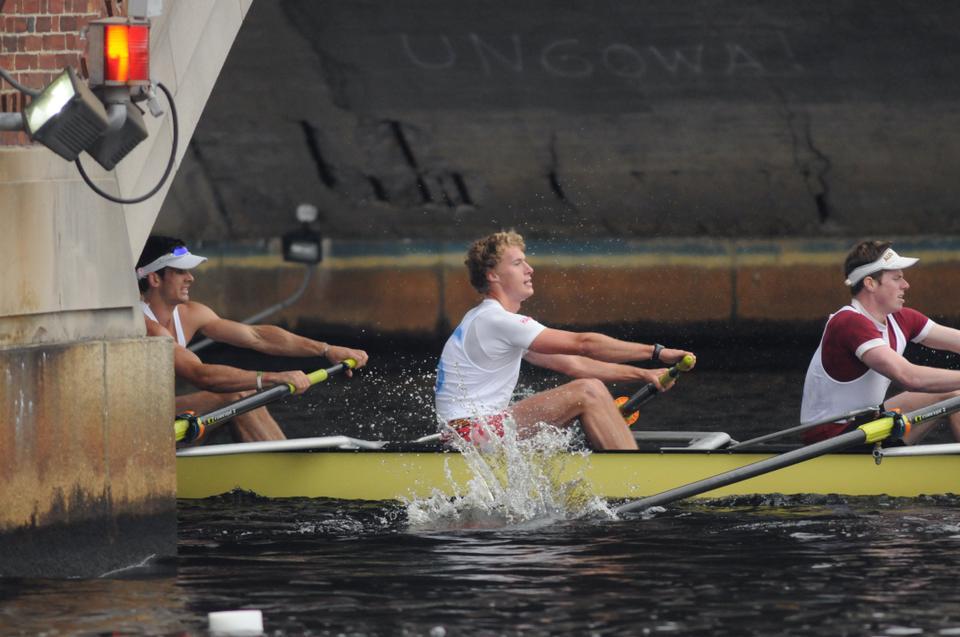 The Harvard men's heavyweight crew came in first place in the Championship Eight event at the Head of the Charles Regatta. By Audrey I Anderson
By Christina C. Mcclintock, Crimson Staff Writer

Washington may be the defending national champions, but the Charles is Harvard’s river.

And on Sunday in the Championship Eight event of the Head of the Charles, the Crimson commanded it.

Harvard’s varsity eight finished nearly six seconds ahead of USRowing and 8.5 second ahead of the Huskies, the second fastest collegiate crew of the day.

“It was a good day at the office,” said junior bow seat James O’Connor.

Washington, last year’s Head of the Charles champions, started just ahead of the Crimson, but Harvard was able to resist the temptation of focusing on its competition too early.

“The first mile, we just kind of did our own thing,” O’Connor said. “We just settled into a really good rhythm.”

About a mile in, the crew took its move.

“By the one-third mark, [junior] David [Fuller], our coxswain, was telling us that we were catching Washington, and we got really excited” said senior seven seat Matt Edstein.

“We really revved it up from there,” O’Connor added. “Sitting in the bow seat, I could see [sophomore] Andy Holmes and [junior Josh] ‘Hicksy’ [Hicks] just jump on it. They got the fire in their bellies; it was really good.”

The chase continued until the Crimson was finally able to gain overlap with the Huskies around the Eliot bridge.

But because Harvard had fought so hard for the inside of the Eliot turn, it yielded the final turn of the day to Washington, which allowed the Huskies to finish with open water.

“It was good to catch them for at least a little bit,” Edstein said.

And the ground the Crimson had gained over the course of the race was enough to give it a substantial lead.

“This told us that what we’ve been doing has been pretty strong,” Edstein said. “At the end of the day, our big race is in eight months. It’s a good encouragement that if we slack off, the other crews aren’t that far behind.”

Harvard’s top championship four entry took fourth. The Crimson prioritized its top eight ahead of its top four, but not all programs followed suit, meaning that Harvard’s rowers were competing against many programs’ top athletes.

“It was not our best row; it was a pretty ... rocky row,” said senior bow seat Nick Jordan. “But we were very aggressive with it, so we had a good result.”

Only the USRowing eight, stroked by Will Newell ’11, separated the Harvard lightweights from sharing the limelight with the Crimson heavyweights. Harvard will just have to be content with being the fastest collegiate crew by nearly 14 seconds.

Starting third behind Princeton and Cornell, the Crimson 1V surged into second place before it got to Newell Boathouse.

“We were catching up to Cornell and sort of caught them by the Weeks footbridge,” said junior four seat Stu Taylor. “We passed Cornell going past Weld.”

“We just ripped it out,” added sophomore bow seat Michael Wales. “It was so cool to be in the boat with a bunch of legends ... I had a blast. It was just a lot of fun, the whole thing.”

Harvard’s second varsity, meanwhile, took 13th overall. The Crimson was the second fastest 2V and finished a little over a second behind the 12th-place Tigers’ 2V.

“It’s a building process for the JV this season,” said captain and six seat Tom Nesel. “We started off pretty well. We held off many fast crews into Eliot Bridge ... A lot of guys had a lot of heart, and they gave it all they had.”

After the top two eights, Harvard’s next priority boat was the lightweight four, which also took 13th overall.

“There were some very good stretches,” said senior bow seat Collin Rees. “We felt like we really got it going.”

“This weekend was probably one of our best showings,” Taylor said.

—Staff writer Christina C. McClintock can be reached at ccmcclin@college.harvard.edu.