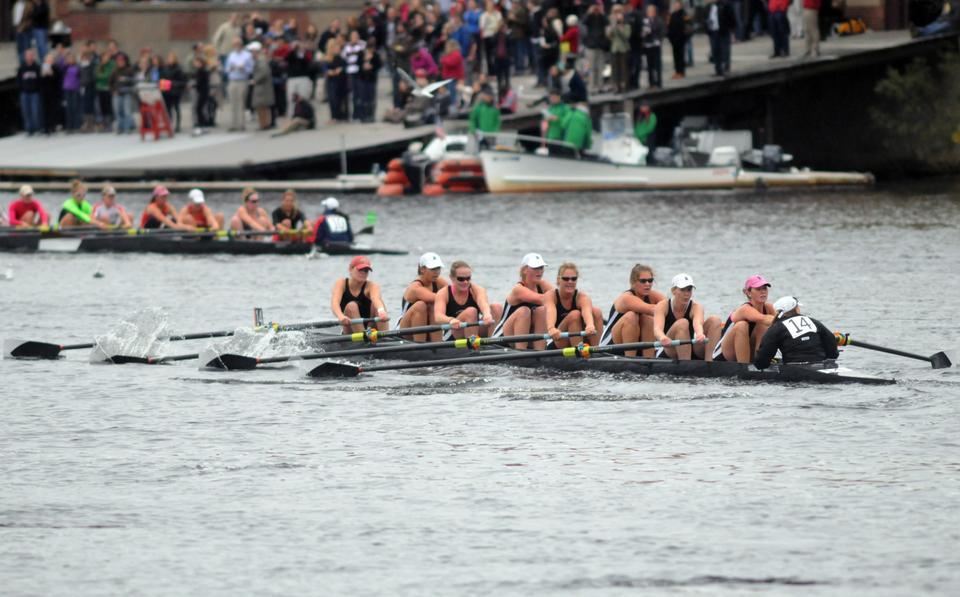 The Radcliffe heavyweights came in second in the Championship Eights event at the 47th Head of the Charles Regatta. By Audrey I Anderson
By Oluwatoni A. Campbell, Crimson Staff Writer

In what has become the largest two-day rowing competition in the world, an estimated 319,000 spectators flocked to the banks of the Charles River this past weekend for the 47th annual Head of the Charles Regatta.

The Radcliffe heavyweights and lightweights, coming off strong performances at the Head of the Housatonic Regatta, returned to their home course hoping some of that momentum would carry over.

“We went into the race ready to give it our all and go our hardest,” junior Scout Moran said. “We were up against some fierce competitors, but we were quite pleased with our results. The Head of the Charles is a really fun time, and everyone brings their A-game, so it was thrilling to see how we did.”

In the women’s Championship Eight race of the Head of the Charles Regatta, the Black and White heavyweights fielded two boats. The 1V and 2V finished the course in 16:19.63 and 17:15.4 to earn a second- and 22nd-place finishes, respectively.

Although the 1V finished just eight seconds shy of UVA and the Championship Eight title, this has only increased the determination of the Black and White to improve for the spring season.

“Eight seconds, really?” said Moran after hearing of her boat’s final time. “Bring it on! I’m excited to start training, and UVA will be in our minds.”

In its first event of the regatta on Saturday, Radcliffe finished in 13th-place in the Club Eight event in 19:00.76.

With that time, the Black and White finished firmly in the middle of the race among 28 entrants.

In the second day of the Regatta, Radcliffe took to the waters for the Championship Four event.

Led by freshman Eliza Flint, sophomore Deva Steketee, and juniors Marisa D’Orsogna and Jessica Mealia, the Black and White Heavyweight 4V completed the course in a time of 19:05.19, earning an eighth-place finish. Ivy foes Yale and Brown edged out Radcliffe with sixth- and seventh-place finishes, respectively, while the Vesper Boat Club took first-place.

As the heavyweights look toward to the upcoming Foot of the Charles regatta in mid November and the spring competitive season, the rowers look to take some of the lessons learned at the Head of the Charles to their future competitions.

“I think the races we had this weekend reminded us how we have to race fearlessly,” Moran said. “This weekend, we had complete trust in our coxswain and our stroke. We weren’t concerned about where we were in relation to the other boats. So I think that sense of fearlessness is one that we hope to take into our future practices and races.”

Under the leadership of new Radcliffe coach Michiel Bartman, the lightweights looked to pick up where they left off last season. The Black and White did not disappoint, as all three crews finished in the top 10 of their respective races.

“I think it was a great showing for our team,” senior coxswain Maryana Vrubel. “We went out on the course with a lot of focus, and we did pretty well. But the fall season is the fall season. It’s when we build up for the spring season, and I think we showed that we are incredibly strong and that we have a lot to work with on our team.”

With times of 17:17.19 and 18:20.20, the lightweight 1V and 2V finished in third and fifth place, respectively, in the women’s Lightweight Eight race. The Black and White 1V finished just over a second behind second-place Stanford but nearly 24 seconds behind first-place Wisconsin.

Ancient Eight rival Princeton, who was due to compete in the race, was scratched off the starting lineup.

The Radcliffe 4V finished the course in 20:26.19 to earn a ninth-place finish. The Vesper Boat Club—Bartman’s former team—came in first place in the women’s Lightweight Fours.