Minimalist ‘Margin Call’ is on the Money 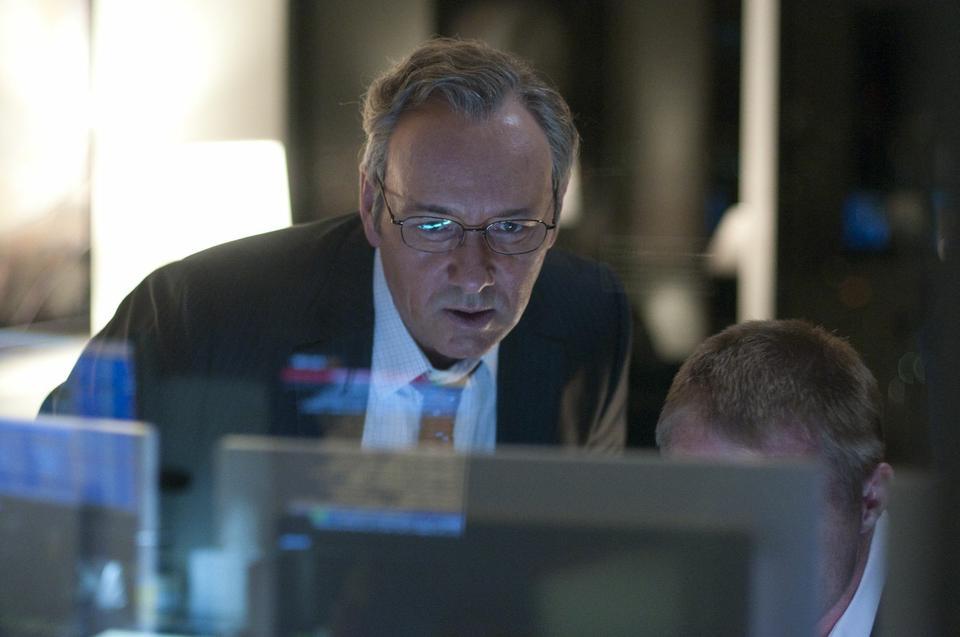 At the start of “Margin Call,” the sprawling city of New York is on panoramic display, its sparkling financial district emblematic of a world where dreams are made. But this inspiring image is immediately undercut within the fast-paced trading room of an unnamed investment firm. As it turns out, New York is instead the place where dreams are crushed, for the cutthroat corporations of Wall Street show no mercy. An icy and tense atmosphere pervades the floor of the firm, where something is awry. Eric Dale (Stanley Tucci), a risk analyst and career employee, is called into a side room. He is politely told that his cellular phone service will be cut the moment he steps outside the building and that he will be given until 4:47pm tomorrow to take the company’s offer of severance. As it turns out, most of Dale’s floor is being fired that day, as the firm cleans house in a ruthless bid for greater efficiency; it is, as Will Emerson (Paul Bettany), an executive, puts it, a “bloodbath.”

This is the setting within which newcomer director J.C. Chandor places “Margin Call,” a well-crafted boardroom thriller about the fateful decision of a fictional investment firm that contributes to the 2008 financial crisis. With sharp character portraits and a tragic plot arc, the minimalist film offers a poignant reflection on the culture that gave rise to the collapse of the country’s economic sector, and pointedly portrays both the perceived greed and basic humanity found on Wall Street.

In the wake of the movie’s opening purge, one the few employees left standing is Peter Sullivan (Zachary Quinto). After his boss Dale is fired, Peter plugs some numbers into a risk model his departed mentor had created, and is shocked to discover that the assets on the firm’s books are overleveraged and that their potential losses are projected to be greater than the entire value of the company. “The music is about to stop,” he explains, “and we will be left holding the biggest bag of excrement in the history of capitalism.” This chilling information is passed to the upper echelons of the firm, from Will Emerson to Emerson’s boss, Sam Rogers (Kevin Spacey), to Rogers’s boss, Jared Cohen (Simon Barker), and finally to chief executive John Tuld (Jeremy Irons).

In Chandor’s screenplay, each employee represents a different aspect of Wall Street. The aggressive executive Seth Bregman (Penn Badgley) symbolizes all the ambitions of a hot-blooded young man ready to embrace the world of finance in the pursuit of ever-greater sums of money—the sort of person who obsessively compares his own salary with those of his colleagues. Bregman is compellingly juxtaposed with Sullivan, a rocket scientist who turns to Wall Street as his second choice of career. Barker’s Cohen, meanwhile, is the seasoned, sardonic, ruthless executive who has sold his soul to the devil with nonchalant ease. He, in turn, seems to draw inspiration from Tuld, who as the immoral head of the firm personifies the evils of Wall Street itself. Corruption at the top slowly infects the rest of the firm, and in following its archetypal employees, Chandor shows how greed, money, and ambition can ensnare the cynical and idealistic alike.

The moral heart of the film is provided by Spacey’s character, Sam Rogers, whose dilemma serves to humanize an otherwise inhuman financial sector. Rogers’s loyalties to the firm conflict with what he believes is right: if he sells off the firm’s assets—which he knows have no value—to get the toxic properties off the company’s books, he will cripple the market for years. Rogers’ sense of right and wrong is constantly challenged and muddled by his superiors, who seek to embroil him in their self-serving schemes. Tuld slyly notes that “there is a lot of money to be made getting out of this mess,” while Cohen opines that “often what is right can take on multiple interpretations.” Spacey’s conflicted and moving performance, the polar opposite of his comedic work in “Horrible Bosses,” is the dramatic highlight of the film.

Ultimately, despite some overly lengthy technical sections, the film’s dialogue and characterization do justice to its subject matter of the economic meltdown in all its complexity. An impressive writing and directing debut for Chandor, “Margin Call” is a stark and unnerving portrayal of humanity and the corruptions of greed. And while its harsh criticisms of the culture of Wall Street may seem extremely cynical and at times overblown, they also point to a chillingly relevant reality.