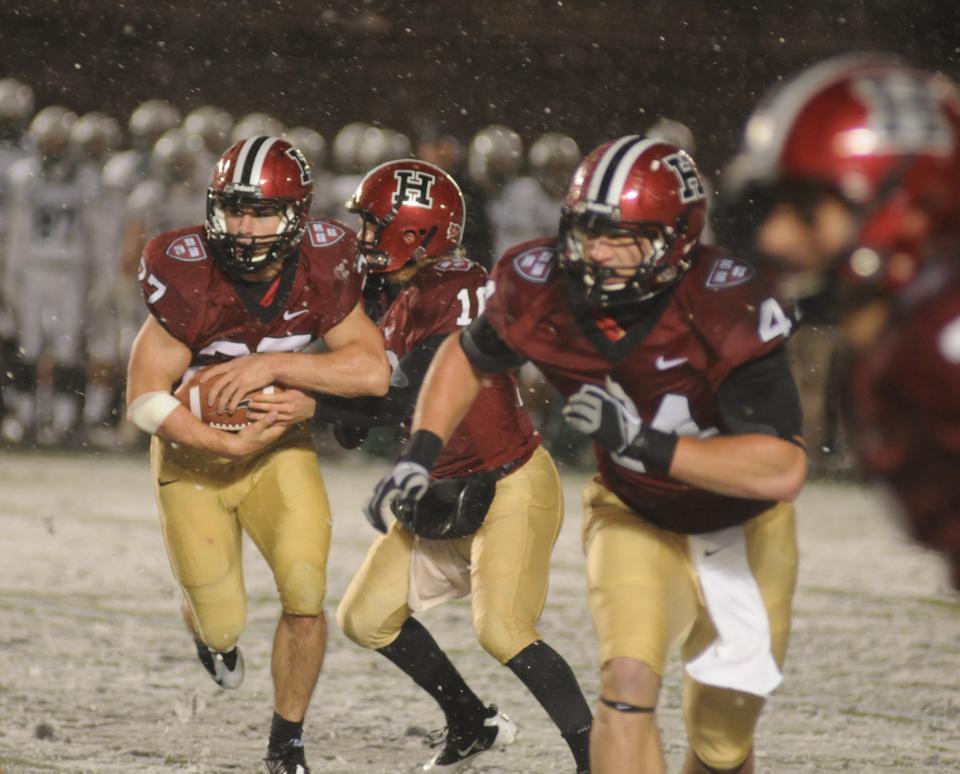 Harvard's run game was crucial to the Crimson's 41-10 victory over Dartmouth on Saturday.
By E. Benjamin Samuels, Crimson Staff Writer

For most of the season, Harvard football has been all about the pass.

But on a cold and snowy night at home Saturday, the Crimson (6-1, 4-0 Ivy) changed its game plan. And once again, the team dominated—and rewrote the record books along the way.

The performances mark the first time that the Crimson has ever had three different players rush for at least 100 yards in a game. All three also scored two touchdowns.

“We’ve got two outstanding running backs, that’s for sure,” Harvard coach Tim Murphy said. “We didn’t expect Zach to rise to this point in the depth chart this soon.”

With the win, Murphy ties long-time Harvard coach Joe Restic all-time wins record in the program. Murphy picked up his 117th win as the team’s coach, his position since 1994.

The changes in the seemingly-fluid record books don’t end there. The victory marks the first time that Harvard has scored at least 40 points in four straight games since 1890.

But as far as the present is concerned, the biggest news of the day was about 50 miles south. Earlier in the day, Penn lost to Brown, 6-0, ending the Quaker’s 18-game Ivy League win streak. The Bears’ win gives Harvard sole possession of first place in the Ancient Eight and sets up a three-way tie between Brown, Penn, and Yale in second place.

For the first three games in Harvard’s streak of 40 or more points—one that dates back to a win at Cornell—passing was the story. But the Crimson adjusted its strategy given the inclement conditions, and the team was just as effective on the ground.

With the exception of a short drive that came at the close of the first half, the Big Green could not stop Harvard from reaching the end zone until the middle of the fourth quarter, and that was only after many of the team’s backups made it into the game.

The Crimson’s scoring barrage began early in the first, with Winters scrambling for a touchdown six minutes in. But after a missed extra point by Harvard kicker David Mothander, it looked like the weather would play a major role and keep scoring low all night.

In the final minute of the quarter, Dartmouth hit a 27-yard field goal to get within three. But that’s as close as the Big Green would get.

Already up by 10 in the second quarter, the biggest touchdown of the day may have come in the second. It started with Dartmouth punter Daniel Barstein’s kick that was downed at the Crimson’s one-yard line.

Harvard had to cover 99 yards to score, and the Big Green looked like it still had a chance mid-way through the period.

Fifteen plays later, Scales powered into the end zone on the opposite end of the field to give the Crimson a 17-point advantage on the near-freezing night.

“I think that’s the first time all year we’ve been under center,” Winters said of the first play on that drive. “It just started with a little QB sneak ... Our O-line did a fantastic job tonight. Having three 100-yard rushers, a lot of that is up to them.”

Dartmouth never recovered after that drive and failed to generate offensive momentum for the rest of the game.

“[That 99-yard drive] hurts,” Dartmouth coach Buddy Teevens said. “That’s a critical drive for them, and credit to them. They were flawless with their execution [and] mixed up their play selection well.”

With the game already moving out of reach, Harvard added three more touchdowns in the third quarter, and it was another one-yard Scales run with under a minute in the frame that pushed the team above the 40-point plateau once again.

Although Harvard and Dartmouth played under the lights, the official attendance of the game was only 6,029—by far the Crimson’s lowest home attendance this year. The actual number of people at the game was likely fewer than that.

But even with rough conditions and a revamped game plan, Harvard moved one game closer to capturing the Ivy crown.

“On Monday, the weather forecast was 20 percent precipitation,” Tim Murphy said. “On Wednesday, it was about 40. By Friday, we were going to have the storm of the century. So we changed our game plan about three times.”