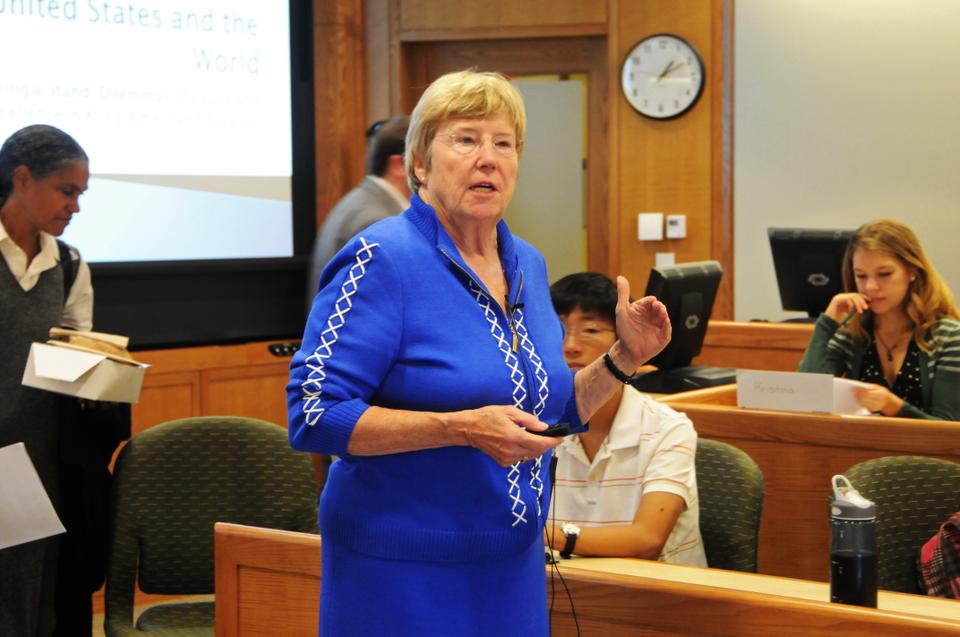 Prof. Katherine K. Merseth interactively lectures on rural education before a video conference with Colorado Sen. Mike Johnston during her US in the World 35 class on Monday.
By Michelle M. Hu and Rebecca D. Robbins, Crimson Staff Writers

Standing in front of the 50 students in her education reform course, Graduate School of Education Professor Katherine K. Merseth told her students, “If you’re not outraged, you’re not paying attention” to the state of American education.

Merseth teaches United States in the World 35: “Taking a Stand: Dilemmas of Equity and Excellence in American K-12 Education,” the first course to be offered exclusively for undergraduates at the Ed School.

Though there has been a growing interest in education reform at the College—evidenced by the 18 percent of the Class of 2011 that applied to Teach for America—U.S. in the World 35 is one of the few courses on education available to undergraduates.

The class, which drew far greater interest than many anticipated, is designed “to bring education more into focus for undergraduates,” Merseth said.

But beyond just exposing students to opportunities in education at Harvard and the broader world, the course also represents a move for greater collaboration between Harvard’s different schools.

According to Merseth, University President Drew G. Faust spoke with Ed School Dean Kathleen McCartney last year about her desire to create an undergraduate course about education reform to be offered at the Ed School.

McCartney then asked Merseth if she would be interested in teaching the class.

Faust’s interest in the new Gen Ed course is a reflection of her overarching goal for the University, Director of the Program in General Education Stephanie H. Kenen said.

“The president is being very proactive as part of her ‘One University’ initiative,” Kenen said, referring to Faust’s stated mission to foster greater collaboration between Harvard’s different schools.

Kenen added that Faust has been talking to deans and faculty members across the University about designing programs to teach undergraduates.

According to Kenen, the College is required to fund a portion of the salaries of many of the graduate school faculty who teach courses for undergraduates.

To help offset these costs, Faust has asked graduate school deans to contribute resources to the College, Kenen said.

Faust “is trying to encourage the deans of the other schools to, in some ways, ‘donate’ an appropriate course,” she added.

Merseth said she believes the scarcity of education courses available to undergraduates can be attributed to the College’s traditional focus on liberal arts.

“Historically, the College has been very careful about what one might call vocational studies,” Merseth said.

Although the Ed School offers the Undergraduate Teacher Education Program, which allows College students to simultaneously obtain a teaching degree and a bachelor’s degree from Harvard, Merseth said there is limited awareness of the program at the College.

“I can run into ten undergraduates, and six of them don’t even know that there’s an undergraduate teacher education program,” said Merseth. “It hasn’t been visible.”

Although Merseth said she would like to see education courses have a greater presence on campus, she added that she would not support a concentration in education studies because she thinks that undergraduate preprofessional studies “can get very fluffy.”

Instead, she said she encourages students to explore their academic interests in college, and those passionate about education should pursue the subject in graduate school.

Even in its inaugural year, the course has already proved to be a popular offering. Almost 90 undergraduates expressed interest in the class, forcing Merseth to hold a lottery in order to bring enrollment down to 47 students.

According to data provided by the teaching staff, at least 19 different concentrations—ranging from literature to applied mathematics—are represented in the course.

“It’s a totally different way of thinking about teaching. It’s much more creative,” said Ashtynn B. Baltimore ’13, who added that the class is the best course she has taken at Harvard.

According to some enrollees, the course is also increasing awareness of education-related opportunities at Harvard.

Jyoti Jasrasaria ’12, who is studying in the Undergraduate Teacher Education Program, said she has given information about the program to half a dozen fellow students in the class.

Merseth said she is passionate about helping her students become education advocates, no matter what career they choose to pursue.

“I’m on a personal crusade” to build up interest in education reform, Merseth said. “I’m desperate about it, I’m frantic about it.”