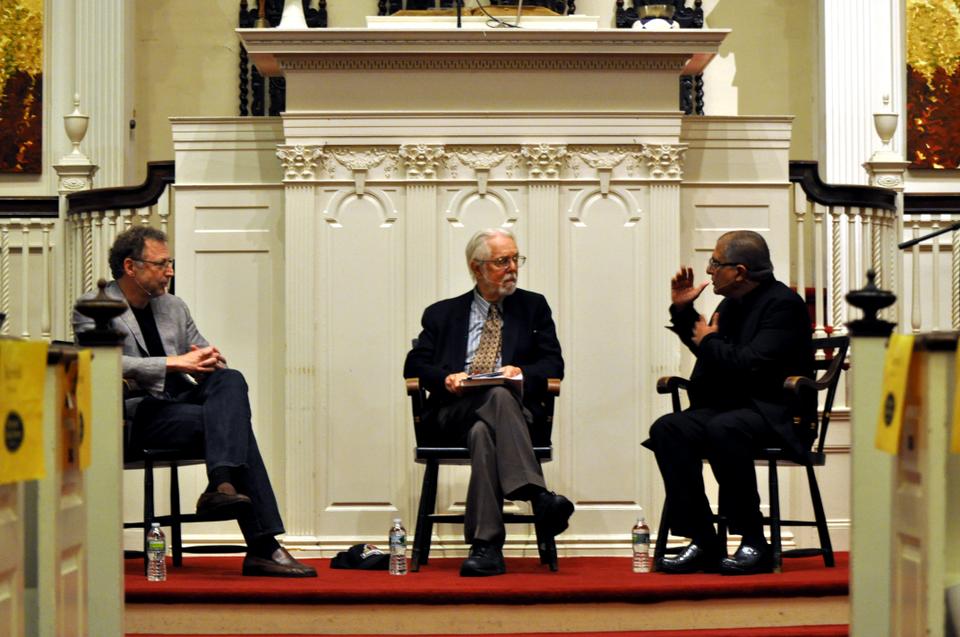 Prominent spiritual writer and physician Deepak Chopra and physics researcher Leonard Mlodinow debated the questions that arise from the differences and intersections of their two fields yesterday before a packed audience at the First Parish Church.

Chopra and Mlodinow, a professor at the California Institute of Technology, presented in Cambridge as part of a seven-city tour following the release of their new book, “War of the Worldviews: Science vs. Spirituality.”

In their book, Chopra and Mlodinow wrote alternating chapters that address fundamental questions about the universe, time, life, and God.

But at Wednesday’s event, both authors said they regretted the use of the word “war” in the book title, considering it misguided.

The authors emphasized the complimentary natures of science and spirituality as well as the importance of their co-existence in modern thought.

“Now we would like to call it [the book] either a discussion or a dialectic of our world views,” Mlodinow said at the start of the discussion. “‘Science vs. Spirituality’ is a false dichotomy.”

The two authors agreed that science is key to modern existence, but they said that there are certain questions that only spirituality can address. “Science doesn’t need to evolve and it doesn’t need to answer these questions,” Mlodinow said. “I don’t think future science has to change its methodologies in order to be able to answer those questions.”

But Mlodinow drew a line between the questions that science cannot answer and those that simply have not yet been answered.

Chopra also emphasized the importance of distinguishing scientific findings from spiritual answers. “Most people in their minds confuse evolution as an origin of life, not an origin of species,” he said. “Evolution doesn’t tell us anything about the evolution of life.”

Cox asked the authors to define the sharpest difference between their world views. For Mlodinow, science is distinguished from spirituality by the scientific method.

“Science is about looking at the world and defining its truth ... not recognizing its truth,” he explained.

Chopra said that the primary conflict between science and spirituality is the role of consciousness. He held that science

“This is a human universe,” he said, defending the spiritual view. “It is a universe that is perceived, observed, and conceived in conscience human beings.”

The authors also agreed that Cox played his part well.

“He is one of the voices trying to bridge the gap between science and spirituality,” Chopra said.

“He was tough on both of us which elevated the dialogue. It made me think I should be less opinionated,” he said after the debate.

“He was an intelligent, focused moderator,” said Mlodinow.

Cox asked the men about teaching children about the coexistence of spirituality and science. Mlodinow agreed with Chopra’s response: “Even though we think we influence their minds through education, we really don’t... If you want to change your children, you’ve got to change your self.  Period.”