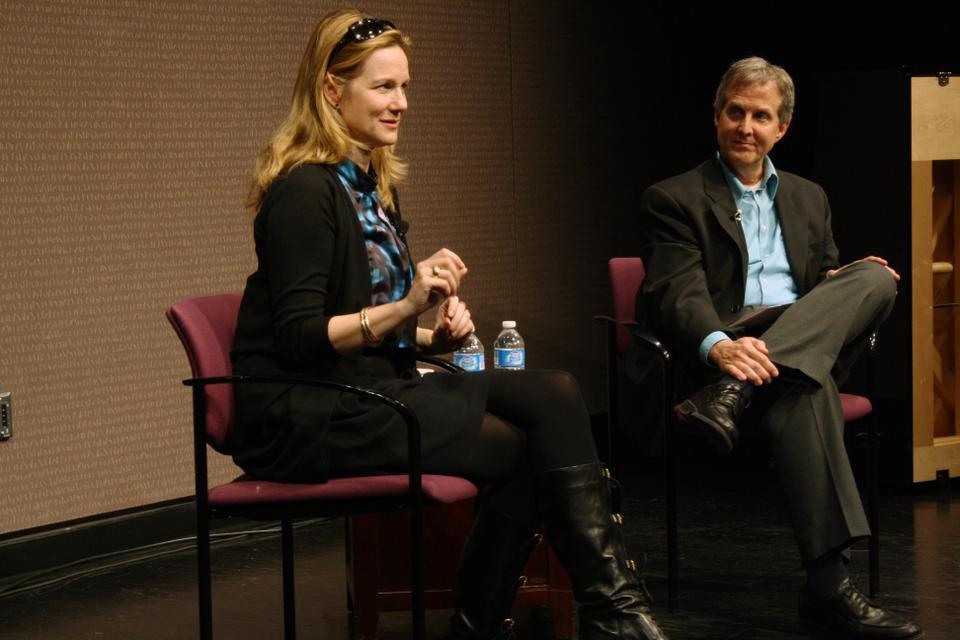 The audience of about 100 at a studio at Harvard’s New College Theatre on Thursday listened as Linney talked about how she brings characters to life.

Known for her performances in “Love Actually” and the HBO mini-series “John Adams,” Linney’s latest role is that of Cathy Jamison, a woman with cancer who decides not to tell her family, in Showtimes’ “The Big C.” She has won three Emmy Awards, two Golden Globes, and a Screen Actors Guild Award and landed lead roles in a broad range of films, plays, and television shows.

Linney’s talk was part of the Office for the Art at Harvard’s “Learning From Performers” program, which aims to facilitate dialogue among performers about the creative process.

Linney grew up on the stage. Tagging along with her playwright father, Romulus Z. Linney, she would sit in the corners of New York City theaters, watching and listening to the actors who shaped her identity as a creature of the stage.

But when the event’s moderator asked her about the moment that she decided she wanted to pursue acting, Linney shook her head.

“I didn’t decide, it was just something that I was,” Linney said.

Even decades later, Linney can remember the play that began to shape her as an actor—a production of “Vanities” in a church basement. In the play, the three leading ladies “ping-ponged” off each other in a bubbly yet orchestrated performance, Linney said.

“I could hear each melody,” Linney said. “I saw how it all connected.”

Bouncing among prep schools and colleges, Linney struggled to find her fit until she settled on studying theater history at Brown University. Although she wasn’t the most polished student, she said, Linney attributes her academic success to her curious mind.

Linney’s academic career was not always smooth sailing. After graduating from Brown, Linney moved on to the Juilliard School, where she gained experience and developed her skills as an actor. But in her fourth year at Juilliard, Linney said she hit a wall and seriously considered dropping out.

Luckily for her fans, Linney’s teacher gave her the advice that got Linney back into the acting game: school is the time to fail, she remembered her teacher saying. From that failure, her teacher said, one can start practicing one’s craft without fear of failure.

Linney tried to communicate the lessons she learned as an actor to the audience populated by adoring fans and a smattering of budding actors.

Instead of paying close attention to her facial expressions and mannerisms on the screen, Linney said she tries to think like her character.

“What I love about the theater is that you’re constantly a student,” Linney said.