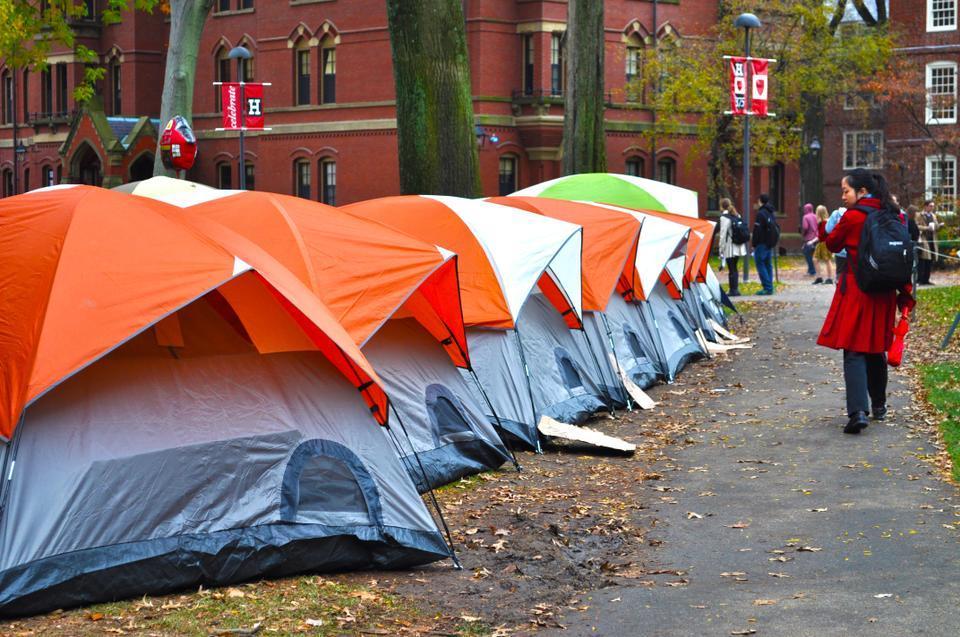 A student reads the cardboard protest sign proclaiming “HARVARD IS THE 99%” as she walks by. The Occupy Harvard movement is beginning to attract more bystander attention.
By Jose A. DelReal, Crimson Staff Writer

Harvard will retain heightened security measures in the Yard for the time being, according to a statement that the University sent out to members of the community on Thursday.

Protesters participating in “Occupy Harvard” demonstrations pitched about 20 tents in front of University Hall Wednesday evening and have since peacefully camped out despite the rain. Dean of Student Life Suzy Nelson met with the protesters yesterday evening and said she will join the “Occupiers” again during their general assembly at 5 p.m.

The statement, co-signed by University Provost Alan M. Garber ’76 and Executive Vice President Katie N. Lapp, stated that the University respected the rights of community members to engage in a public dialogue, but that the protesters’ actions must be weighed against the concerns of Yard residents and Harvard community affiliates.

Raising concerns over safety, the administrators said access to the Yard will remain restricted to those with Harvard identification.

“The University has a fundamental obligation to be attentive to the safety, security, and well-being of its students, faculty and staff on campus,” the statement read. “The events of last night raised safety concerns: the number of demonstrators was large, many of the demonstrators were not from Harvard, and specific behaviors were troubling.”

Harvard Yard Operations and the Harvard University Police Department could not be contacted for a statement regarding specific security measures.

In an emailed statement signed by the Registrar of the Division of Continuing Education Susan E. McGee, Extension School students—who do not necessarily have Harvard IDs—were told that they would be granted access to the Yard if they presented their fall registration schedules in addition to state identification.

But the administration is developing more concrete plans to address this issue, according to the email.

“Please note that these instructions are for tonight ONLY," McGee wrote. "Plans for the weekend and later are still in progress.”

–Staff writer Jose A. DelReal can be reached at jdelreal@college.harvard.edu.