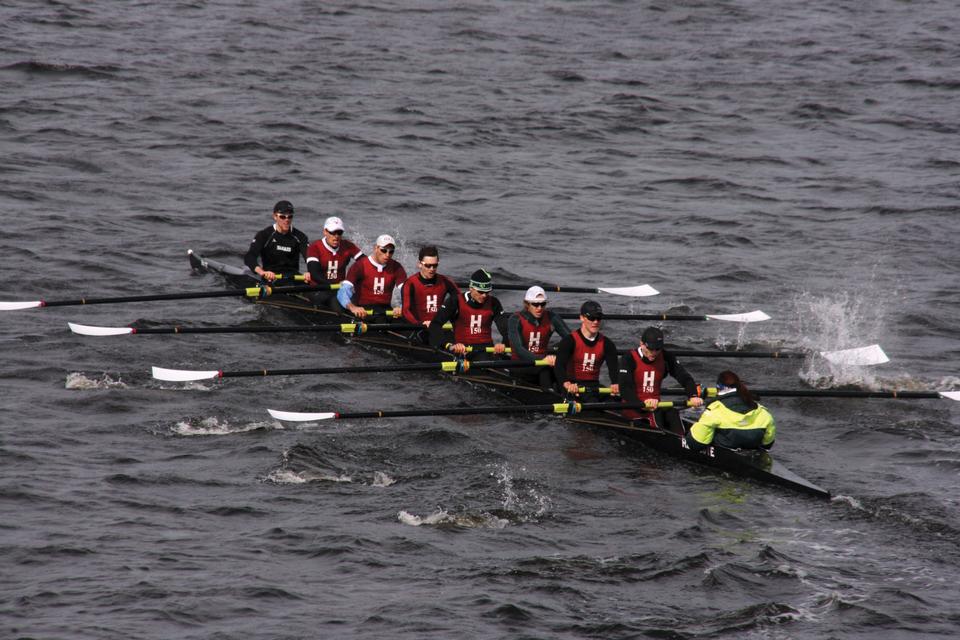 Sophomore Andrew Campbell was recently named the 2011 USRowing Man of the Year. He and former team captain Will Newell (pictured above in the six seat) combined to win the two lightweight men’s events at this past weekend’s US-Rowing East Coast Fall Speed Order. Campbell took first place in the lightweight single event, while Newell won the lightweight pair race.
By Christina C. Mcclintock, Crimson Staff Writer

Those looking to find the top lightweight rowers in the country might want to peruse Harvard’s 2011 roster.

“It was not a national selection [for me],” Campbell said. “It was an opportunity to figure out where I stood relative to the rest of the field. ... This weekend was a good step forward in the process of trying to make the 2012 Olympic team. We have a long way to go, but this is a good step.”

For all competitors, the weekend began with a 6k on Saturday, with the fastest ergers earning the privilege of starting Sunday’s races first.

Newell paced the entire lightweight field with a 19:38 on the 6k piece.

While Campbell did not win the event, he did manage to make a personal jump and finished third among lightweight scullers.

“It’s been quite a while since he tested,” said Charley Butt, who is coaching both the Crimson lightweights and the Olympic double. “He’s a minute faster, which is an enormous jump.”

“It was exciting to be in a room with a bunch of other highly motivated and fast athletes,” Campbell added. “There was an electric atmosphere to that event.”

Campbell was erging next to training partners Austin Meyer ’12-’13 and Will Daly, who graduated from Boston University in 2006.

Campbell’s 6k put him third in the starting order, behind Daly and Greg Ruckman ‘96, who had the fastest erg among scullers. Meyer started fifth.

“It was difficult coming back from such a difficult and long erg piece,” Campbell said. “I was pleased and especially against such strong competition that has the mental tenacity [to race back-to-back].”

Campbell won the single event by over 10 seconds, and only heavyweight winner Michael Sevigny posted a faster time in the single, though Butt noted that variable conditions make it hard to compare times from separate events.

“I was happy to see training partners Will Daly and Austin Meyer finish in the top five,” Campbell said. “It was nice for Will, Austin, and I to do the erg next to each other. We started close to each other [on the water]. We used the relationship we’ve established in practice.”

The race capped what has been an outstanding year for the sophomore. Campbell took bronze at U23 Worlds, fourth at the senior world championships, and second in the Head of the Charles championship double event, in which Meyer served as his partner. Campbell will be honored for his accomplishments at the New York Athletic Club in New York City at the inaugural Golden Oars Awards dinner and at the USRowing convention in Hartford, Conn.

While Campbell has been the most recognizable name, he has not been the only Crimson rower making headlines. In addition to his strong performances on the erg and water this past weekend, Newell also stroked the USRowing eight to a win at the Head of the Charles in the lightweight eight event.

He and Sopko, meanwhile, won by a much smaller margin than Campbell did. The duo edged out second-place finishers Nick Lacava and Anthony Fahden by .27 seconds.

Despite his strong result, Newell noted in a text message that he felt he had “a lot of work left to do.”

In other events at the Speed Orders, Esther Lofgren ’07-’09 and Caryn Davies ’04-’05 took fifth and eighth, respectively, in the women’s pair. Lofgren, who has won the World Championships in the eight the past two years, raced in the pair with Penn grad Susan Francia. Davies, a gold medalist in Beijing and silver medalist in Athens, raced with Meghan Musnicki, an alumna of St. Lawrence.

Olivia Coffey ‘11 and Laura Larsen-Strecker ‘08 took 14th and 24th, respectively, in the women’s single, while Nick Baker ’07 took 15th in the single. All three rowers served as captains during their times in Cambridge.