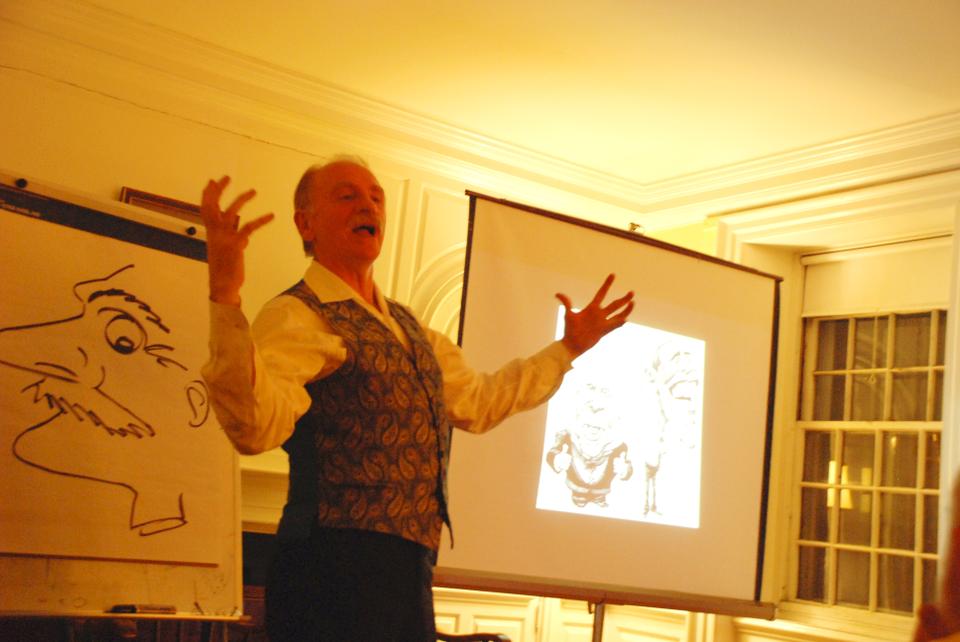 “The birthers think that Obama was born in Kenya, but I think he was born on Easter Island,” joked political cartoonist Kevin P. Kallaugher ’77 while deftly sketching a caricature. He stepped aside from his drawing pad to reveal a comically exaggerated but unmistakable portrait of President Barack Obama, with a huge forehead and jutting jaw.

Kallaugher, an editorial cartoonist for The Economist whose work has been published in newspapers and magazines worldwide, gave a presentation last night at Kirkland House as part of the “Conversations with Kirkland” lecture series. The event, which drew about 30 attendees, focused on the role of political cartooning and satire in modern media.

“As a cartoonist, my job is to be a professional six-year-old,” Kallaugher said.“I find what’s important in the world and then add a twist of humor.”

He demonstrated this principle in a selection of his most successful cartoons, some from the Cold War era and some very recent.

One cartoon published in October depicted the candidates for the Republican presidential nomination as birds. Rick Perry, for example, was represented as a “Texas Strutting Prickly Snark: Agressive and right-winged. Has tendency to put claws in beak.”

The talk highlighted some of Kallaugher’s ink-and-paper work but also emphasized the rapidly changing technology that today’s cartoonists employ.

“The world of cartoons is dying, just as print media everywhere is dying,” Kallaugher said. “But the digital world offers many new opportunities.”

He showed clips made with the cutting-edge motion capture sensors that he uses to animate computerized models of politicians. Then he contrasted that work with a piece of animation he did in 1986. “Back then, it took me over 700 drawings to animate 30 seconds. Now, it’s much easier to keep up with a political landscape that changes in the blink of an eye,” he said.

At Harvard, Kallaugher produced a 13-minute animated film for his senior thesis and drew cartoons for The Crimson.

Kallaugher touched upon the serious role that seemingly frivolous cartoons can play in public discourse. “You can measure the maturity of a democracy by how much satire it can endure,” he said.

Audience members said they were impressed by the level of artistic workmanship that Kallaugher’s profession requires.

“I’ve always known cartooning is a lot of work,” Herbert “Whitt” W. Virgin-Downey ’12 said, “but it’s interesting to see just how nuanced it really is.”