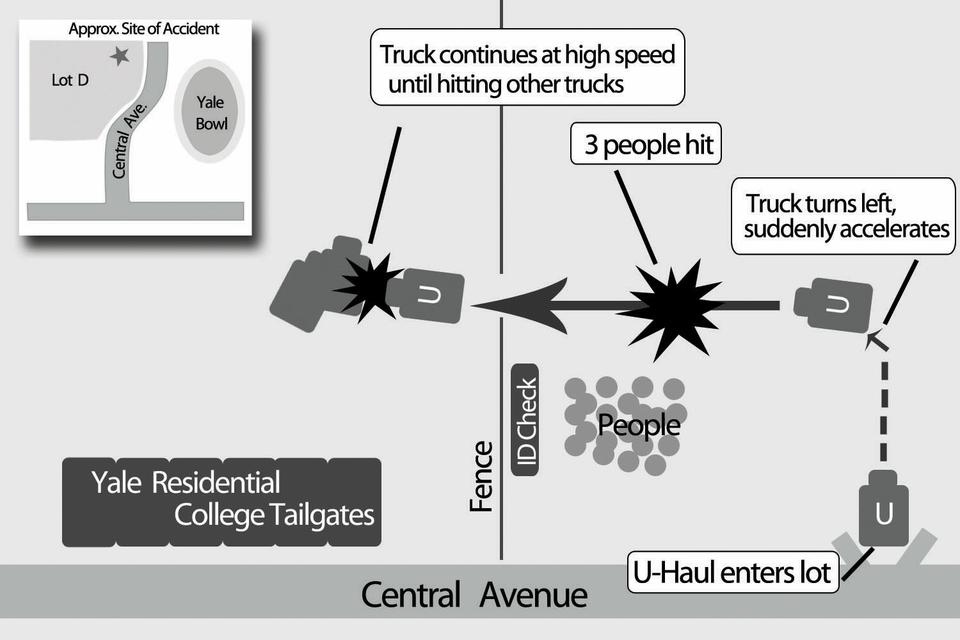 The accident occurred inside the gate of Lot D, the largest parking lot at the Yale Bowl.
By Robert S Samuels and Julie M. Zauzmer, Crimson Staff Writers

A Yale student driving a U-Haul struck and killed a 30-year-old woman at the Harvard-Yale Game tailgate on Saturday.

Short remains hospitalized in serious but stable condition, while Dernbach has been treated for minor injuries and released from the hospital.

Brendan Ross, a junior at Yale, was driving the truck that was transporting beer kegs to a fraternity’s tailgate party.

According to a statement from the New Haven Police Department, Ross passed a field sobriety test. He was taken into custody after the accident but according to his attorney William F. Dow III, he was released on Saturday night and has not been charged with any crime.

Speaking on behalf of Ross and his family, Dow read a statement saying, “We extend our sincere condolences to the family of Nancy Barry for this tragic accident which appears to be the result of a vehicle malfunction.”

The New Haven Police Department’s Accident Reconstruction team is examining the truck to investigate why the driver lost control of the vehicle. The U-Haul was impounded by the police, according to the statement.

The crash occurred at 9:39 a.m. as a small crowd jostled in line to get proof-of-age wristbands and enter the tailgate.

Over the course of the morning—traditionally a time of drinking, barbecuing, and merrymaking leading up to the noon kickoff—a stream of U-Haul trucks transporting tailgate supplies drove just to the right of the crowd in order to enter Lot D, the largest parking facility at the Yale Bowl.

At times, pedestrians waiting in line to enter the tailgate were compelled to scurry out of the trucks’ path.

But as Ross’ U-Haul truck entered the lot, it turned left and accelerated quickly, according to eyewitnesses.

It struck three women on the outskirts of the crowd before hitting another U-Haul truck, which in turn hit a third.

Eyewitnesses said the truck did not slow when it struck the three victims and only stopped upon crashing into the other vehicles a few seconds later.

Ryan A. Hanley ’12 said he was standing nearby and looked over when he heard a vehicle accelerating and people screaming. After the accident, he saw several women lying motionless on the ground.

“I wanted to stay, hoping they were going to get up,” Hanley said. “I was still kind of shocked, and after that, I kind of lost it.”

Despite the fatality, the tailgate festivities continued.

As rumors spread through the partying crowd, many students were entirely unaware of the tragedy or unsure of its seriousness until much later.

Many first heard about the crash when an announcer called for a moment of silence for the accident victims and their families at the start of halftime.

Players on both teams were in the locker rooms during that broadcast and did not learn about the collision until after the end of the game, which Harvard won 45-7.

Harvard coach Tim Murphy learned of the death shortly after the game ended.

“I can’t imagine coming to a football game—a festive occasion—and something like this happens,” Murphy said. “Just so tragic, and our heart goes out to their family.”

Yale coach Tom Williams heard about the incident during halftime but decided against informing his players.

Harvard University President Drew G. Faust and Provost Alan M. Garber ’76 left the game to visit the hospital to check on the status of the injured Harvard employee, according to University Spokesperson John D. Longbrake.

In a press release, Yale stated that its athletics program and college dean’s office will conduct “a full review of the policies and regulations relating to tailgating before athletic events” in response to the accident.

Yale’s tailgate policies have long been viewed as more lenient than Harvard’s.

In recent years, U-Haul trucks have been banned, along with kegs and hard liquor, when The Game is played at Harvard.