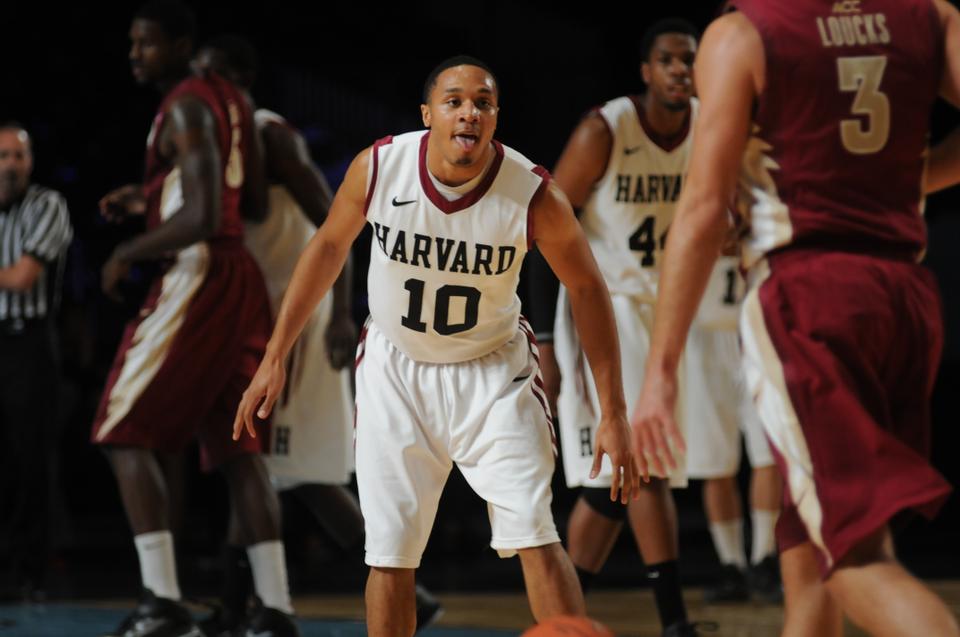 Junior guard Brandyn Curry led the Crimson to an upset of No. 20/22 Florida State Friday night.
By Scott A. Sherman, Crimson Staff Writer

Coming into the inaugural Battle 4 Atlantis tournament this week, nearly every expert predicted a matchup between No. 4 UConn and No. 22/20 Florida State on the tournament’s final day.

Turns out, the pundits were dead-on, as the Huskies and Seminoles will meet Saturday in a highly-anticipated Big East versus ACC contest.

But there’s a catch—that matchup will come in the consolation game. Instead, Harvard and Central Florida—one day after each pulled off upsets that grabbed the attention of the college basketball world—will play for the tournament’s championship at 4:30 p.m.

The Crimson (5-0) is coming off a grind-it-out, defense-heavy 46-41 win over Florida State, its second-straight victory over a BCS conference school after it thrashed the Pac-12’s Utah, 75-47, on Thanksgiving night.

“We really dug in, and we had to,” Crimson coach Tommy Amaker said. “I think our guys knew we had to be dependent on one another, had to have each other’s backs, had to fight, scrap, and claw. We needed a group effort on the defensive end.”

“We never tucked our heads and we just kept fighting,” UCF coach Donnie Jones said. “We were fortunate the ball bounced our way down the stretch, and we found a way to win a great basketball game.”

The Knights are led by junior forward Keith Clanton, who has averaged a double-double of 19.3 points and 10.0 rebounds per game through four contests this year, including 20 points against the Huskies and a career-high 28 against Charleston.

Clanton will prove a tough matchup inside for Crimson co-captain Keith Wright. The senior leads a balanced Harvard squad with 14.0 points and 6.8 rebounds per contest, while his frontcourt mate, junior Kyle Casey, is second on the team with 13.0 points and 5.5 rebounds.

Wright and Casey held their own against Florida State’s athletic, lengthy big men on Friday—helping the Crimson outrebound the Seminoles, 40-30—but both fell into foul trouble early, something they will need to avoid doing if Harvard is going to emerge with a win against UCF.

“I think our bigs, in their hedging, and what they were doing [yesterday] contesting shots at the rim, and also getting a lot of defensive rebounds and not giving up a lot of second-chance points, was key to shutting everyone down,” co-captain Oliver McNally said.

The Knights’ best perimeter player is junior Marcus Jordan. Though not quite as talented as his father Michael, Marcus has emerged as one of the best guards in Conference USA, averaging 16.3 points per game thus far this year. The junior scored 20 to go with seven rebounds and seven assists against UConn, despite facing one of the best backcourts in the country in sophomores Jeremy Lamb and Shabazz Napier.

Jordan will likely be matched up with junior Brandyn Curry, who had five assists and five steals Thursday and is considered the team's best perimeter defender.

“Brandyn is our best playmaker,” Amaker said. “We always want the ball in his hands.”

Sophomores Isaiah Sykes and Tristan Spurlock also average double figures in points for the Knights, as do McNally and sophomore Laurent Rivard for Harvard.

If the Crimson is to win, it will certainly need to improve upon yesterday’s 27.3 percent shooting percentage, which came during a contest in which the two squads combined for the lowest single-half point total in the shot clock era.

UCF, for its part, lost, 73-50, to Florida State two weeks ago. But that defeat shouldn’t comfort Harvard, as the Knights looked like a completely different team in storming back to defeat the defending national champions Friday.

If the Crimson can win, it will mark an early triumphant moment for a squad that has big goals for itself this season. A championship would be an especially meaningful one for Amaker, after the coach—staring at an unimpressive non-conference schedule largely because many BCS schools elected not to face a Crimson squad that was expected to be among the best mid-majors in the country—pushed for Harvard’s inclusion in the field.

The Battle 4 Atlantis is the Crimson’s first regular season tournament in the Amaker era, and Harvard’s win over Florida State was its first over a ranked opponent since it beat No. 17 Boston College in Jan. 2009. With a win tomorrow, the Crimson—which garnered three votes in the most recent AP poll—will put itself in strong discussion for the Top 25, which would be another first for the program.

“We are thrilled to be in the position we are,” Amaker said. “I am very pleased with the effort that our guys have shown at the Battle 4 Atlantis. ... We are very happy to be competing for the championship title at this time of the year.”