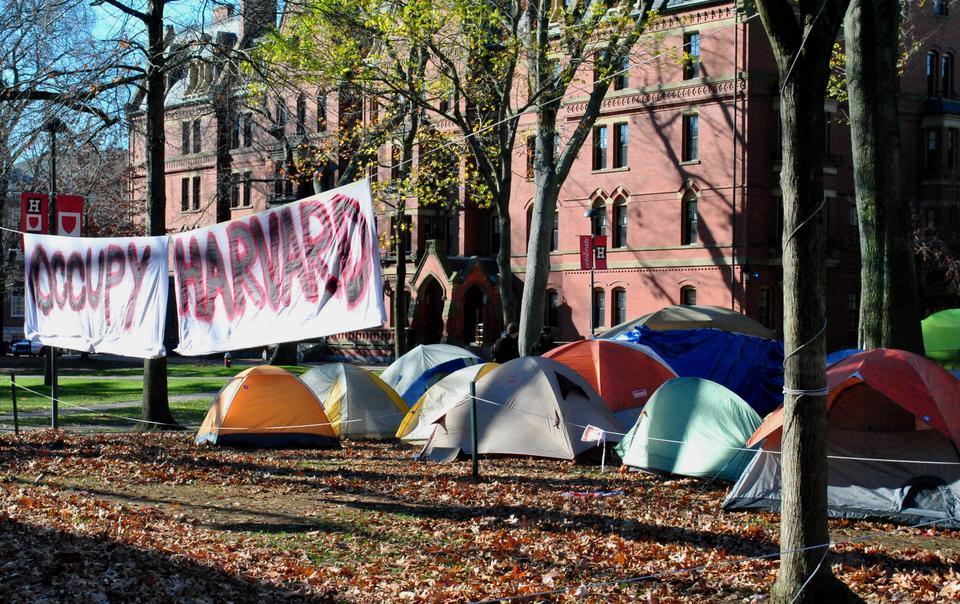 Even for those who remained in tents in Harvard Yard over Thanksgiving break, there was a holiday dinner provided.

Faculty from the Romance Languages and Literatures Department and the director of the Harvard Foundation brought smoked turkey, mashed potatoes, and pumpkin pie to the Yard dwellers in support for the Occupy movement. The event was promoted on Facebook with the tongue-in-cheek title “Occupie Harvard.”

Organizers said about 40 people gathered around tables made of wooden boards and milk crates to celebrate the holiday and discuss the movement’s goals. Later that night, about 20 supporters camped out, according to Timothy S. McGrath, a student at the Graduate School of Arts and Sciences.

“It was a very nice to have faculty and graduate students come and occupy along with us,” said Kavi Bhalla, one of the organizers of the event and a research scientist at the Harvard School of Public Health.

Occupy Harvard supporters also used the Thanksgiving break to refine their message in light of the recent contract agreement reached by Harvard and its custodial union. That agreement met most of the protestors’ demands.

The Occupy movement is now shifting its energy to campaigning for socially responsible investments and endowment transparency, organizers said.

In a general assembly held the day after Thanksgiving, Occupy Harvard called for the University to stop investing in HEI Hotels and Resorts—a hotel investment company that has been accused of preventing efforts to unionize and mistreating workers.

Occupy supporters point to Brown University as an example they said Harvard should follow. Last February, Brown declared that it would halt further investments in HEI due to their questionable labor practices.

“We need to see Harvard’s socially responsible and sustainable commitments realized in their investments,” McGrath said.

He added that Harvard’s $32 billion endowment puts the University in a powerful position.

“Investing that money can change the world, literally,” he said.

On Thanksgiving Day itself, however, the discussion revolved around the global Occupy movement, organizers said.

Many of the faculty members who attended Thursday’s meal had signed an open letter that was sent last week to University President Drew G. Faust calling for Harvard to open the Yard gates, which have been locked since Occupy Harvard first moved in.

Over the holiday break, Occupy supporters also received a donation that organizers hope will sustain the movement over the cold winter months.

About a dozen people gathered to build the skeleton of a geodesic dome donated by MIT supporters of Occupy Harvard.

“It’s a weatherized space for people to stay in during the winter time,” said GSAS student Summer A. Shafer.

McGrath said that when the dome is finished it has the potential to be a “permanent or semi-permanent place on campus for Occupy to exist.”

But currently the dome’s future uses have yet to be discussed and finalized in a general assembly.

—Nathalie R. Miraval can be reached at nmiraval@college.harvard.edu.