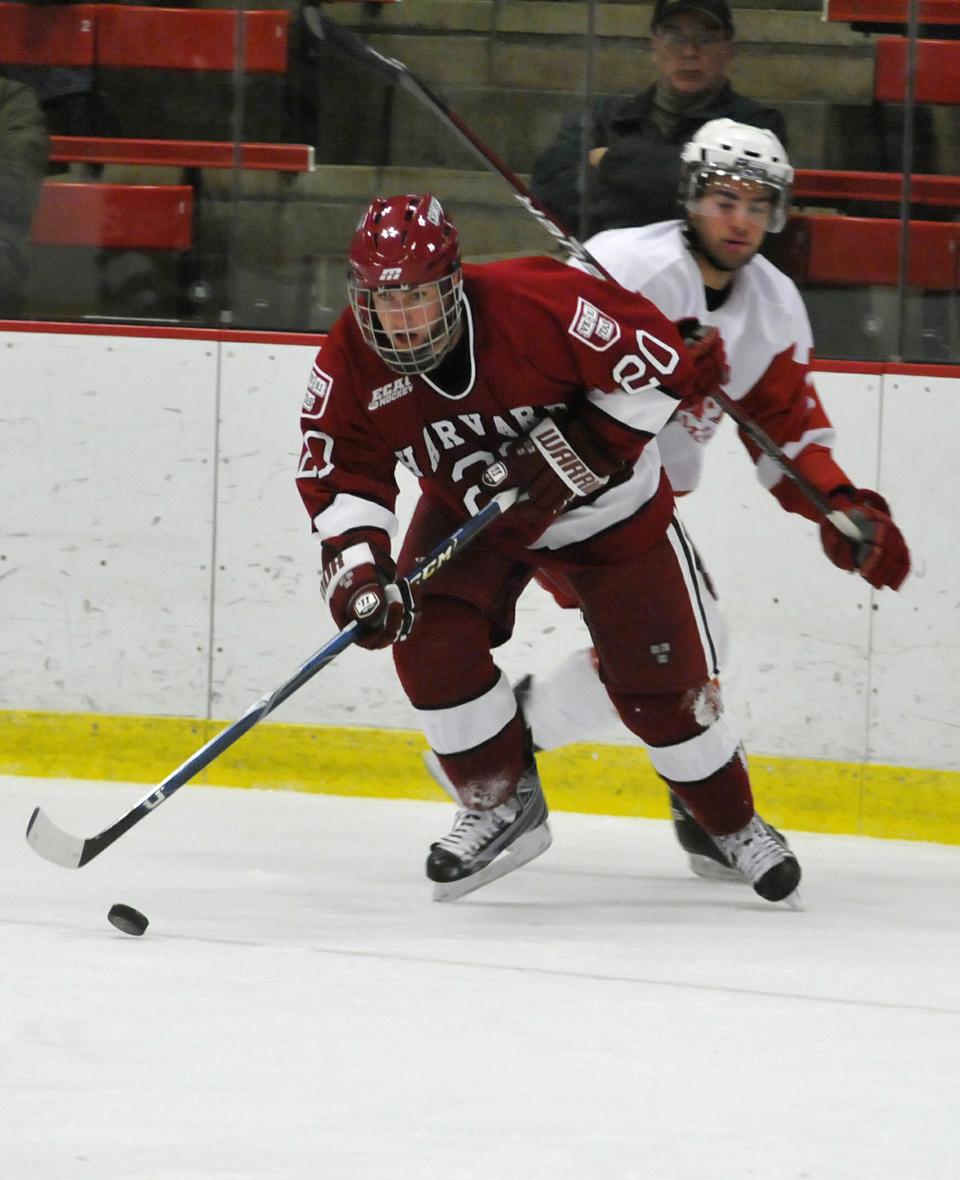 During his one season at Harvard in 2009-2010, Louis Leblanc led the Crimson with 23 points. Leblanc left after his freshman year and is currently playing for the Hamilton Bulldogs. In his first game with the AHL team, he scored the game-winning goal in overtime and also had two assists in the contest.
By David Mazza, Contributing Writer

About a month ago, Louis Leblanc finally made his professional hockey debut. And as far as debuts go, his could not have gone much better.

In his first career appearance, Leblanc had two assists and the overtime game-winning goal, propelling the Hamilton Bulldogs over the Rochester Americans, 3-2, in the American Hockey League (AHL).

Just two years earlier, Leblanc, then a Harvard freshman, made his first collegiate debut. In another memorable performance, the rookie scored one and picked up an assist in the Crimson’s opening 5-3 win over Dartmouth.

In the past four years, Leblanc has had to make four of these debuts in four different leagues—the United States Hockey League, the ECAC, the Quebec Major Junior Hockey League (QMJHL), and the AHL—and has succeeded so far at every step.

“It’s been great to far,” Leblanc said. “It’s been an adjusting period ... I’m excited. This is another step in my hockey career, and the next step is the NHL. It’s a big learning process for me this year.”

And he is not far away from making one final debut. Late Monday night, Leblanc was called up by the Montreal Canadiens after forward Max Pacioretty was suspended for three games.

This NHL debut will be even more special for Leblanc, as it will be for his hometown team.

“[I’ve] always been watching them since ever I can remember watching hockey,” he said. “So it’s [been] an honor just looking forward to making the big team.”

His road to professional hockey was not always so clear.

Two summers ago, Leblanc had to make one of the most difficult decisions of his life. He could either remain at Harvard—he was the team’s top scorer and was named Ivy League Rookie of the Year in the 2009-2010 season—or he could leave Cambridge and play for the Montreal Juniors.

Ultimately, Leblanc chose to leave Harvard for amateur play in the QMJHL, thinking it would give him the best shot at making the Canadian World Juniors team.

“It was a really tough decision leaving,” Leblanc said. “But I don’t regret my choices, and I just look forward from here.

“I loved my first year at Harvard,” Leblanc added. “Everything about it was great, schooling-wise and hockey-wise.”

He was a huge asset for Harvard’s offense, leading the team with 11 goals and 23 points. The former member of the class of 2013 was also second on the team with 12 assists and named a finalist for the ECAC Rookie of the Year.

He made an impression in only a year at the school, and his teammates and coaches commented that his importance to the team extended beyond his contributions on the ice.

“Louis’s a good teammate,” said junior forward Conor Morrison, who was a freshman with Leblanc two years ago. “You always knew what you were going get from him. He was always going to work super hard [and] give 100 percent every shift.”

Leblanc still keeps in touch with many of his former Crimson teammates, and even texted Harvard coach Ted Donato to wish him well before the opening game of the season this year.

“During his time here, he had his mind set on competing for Harvard and going to school here,” said junior forward Alex Fallstrom, who also played as a freshman alongside Leblanc. “He did everything in his power to contribute to the team and wasn’t thinking too much of the future.”

He surprised many of his teammates and coaches when he decided to leave the Crimson during the summer after his freshman year, including Donato.

“I don’t think it was a rushed decision ... even though looking at it now, I would say I strongly disagree with it,” Donato said. “There’s always a number of factors, but ultimately [I believe] his agent had the largest say in it.”

Hockey-wise, Donato believed that playing major juniors back in Canada against younger players was a step down from the Ivy League, ECAC, and the NCAA. But Donato’s main concerns were Leblanc’s development off the ice and the increased risk of injury.

“The NHL team he’s drafted by [is] less interested in his developments as a person fully than they are as a hockey player,” he said. “I think that coming back would have been a great thing for him.”

Leblanc said that Donato, who had a lengthy NHL career himself, advised him on the nature of pro hockey and its tough atmosphere.

“He taught me to stay composed,” Leblanc said. “There’s a lot of ups and downs [in professional hockey].  It’s a rough business, [so he told me] to be ready and look out for yourself because everyone wants a piece of you.”

Since the QMJHL and professionals play many more games than the Crimson does, Donato believed this would hinder Leblanc’s physical development as well. With a higher risk of injury, the Harvard coach was worried that Leblanc would have to focus more energy on recovery and less on maturing, putting on weight, and growing stronger.

And sure enough, Leblanc has been banged up after Harvard, as he underwent shoulder surgery last summer.

But this hasn’t hindered his success. In 14 games with Hamilton, he already has four goals and six assists, and the parent club noticed. After only a month of professional experience, the Habs called him up to the NHL.

Though Donato disagrees with Leblanc’s decision to leave the Crimson, he added that Leblanc remains a part of the Harvard hockey family. Still, with the skills that Leblanc brings, the Crimson may have had more success on the ice.

“I think there’s always a part of me that goes to bed and says what if, what if Louis were here tonight?” Donato said. “But at the end of the day, we really wish him well and will always be supportive of him.”

Leblanc will suit up with the Canadiens for the first time and looks to make his final hockey debut in Anaheim against the Ducks on Wednesday.

“I’m enjoying what I do,” Leblanc said. “I love hockey, and I want to play hockey for the next 20 years.”