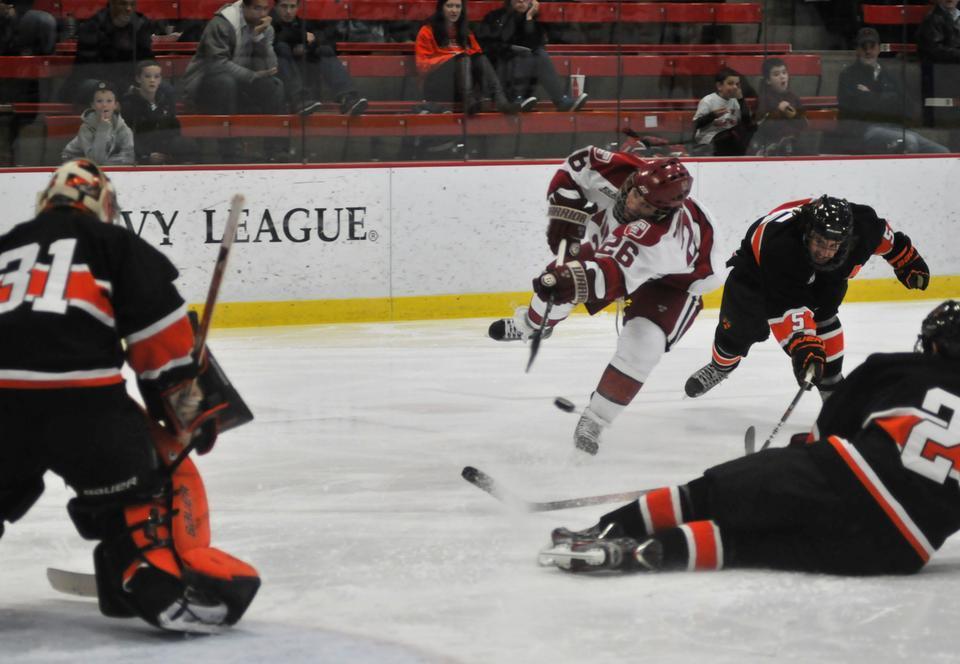 Junior Luke Greiner fires a wrist shot towards the net during Harvard's Season Opener on Friday. The Crimson fell 4-3 to Princeton. By Mark Kelsey
By James M. Acer, Contributing Writer

The crowd at the Bright Hockey Center erupted Friday night as a third period wrist shot from Crimson junior forward Luke Greiner sailed under the glove of Princeton goaltender Sean Bonar and into the back of the net, bringing Harvard (0-1-0, 0-1-0 ECAC) within one goal of the Tigers (1-1-1, 1-1-0) with just over eight minutes to play.

Despite the Crimson’s heroics, the Princeton defense held strong for the remainder of the game, and the Harvard men’s hockey team could not find an equalizer as it fell, 4-3, in its opening contest of the 2011-2012 season.

The Crimson was forced to battle from behind for most of the game.

The Tigers struck first on a power-play goal from senior forward Brodie Zuk, who gathered and scored a loose puck in front of net with just under a minute left in the first period to give Princeton the early lead.

Six minutes into the second period, Tiger junior defenseman Michael Sdao added a second power-play goal, as his shot flew past screened freshman goaltender Steve Michalek to give the Tigers a 2-0 edge.

Princeton extended its lead to two goals minutes into the third period, when freshman forward Aaron Kesselman put home a rebound in front of net.

But after a Tiger penalty, Killorn responded with his second goal of the night on a wrist shot assisted by junior forward Conor Morrison to again cut the deficit to one with 12:30 remaining in the game.

A Crimson penalty two minutes later ended in a fourth goal for Princeton, this one delivered by senior defenseman Derrick Pallis. Down 4-2 with less than nine minutes to play, Harvard responded swiftly.

Greiner took the puck down the ice, split the defense, and fired a shot on net to tally the Crimson’s third goal with eight minutes to play.

Harvard was unable to capitalize on the momentum.

The Tigers attack was relentless in the waning minutes of the game—Michalek made several key saves just to keep the Crimson’s chances alive.

After a penalty, Harvard was left with just over a minute to find the game-tying goal, but its desperate six-on-five attempt fell short, and Princeton skated off with the win.

“There are a lot of things we can improve on as a team,” Crimson coach Ted Donato said.

Harvard was plagued by inconsistency throughout the game—the home side was dominant at times and struggled at others.

“We played very well in spurts, but I don’t think we had that for the entire game,” Killorn said.

Both Killorn and Donato pointed out that there were likely some rust and nerves, as expected in the first game of a season. Princeton was playing in its third game on the year.

“No matter how long you practice, it’s different than an actual game,” Killorn said.

Donato was quick to give the Tigers credit for their physical play.

“They made it tough in front of the net,” Donato said.

Considering three of Princeton’s four goals came on the power play, the Crimson’s penalty kill will be an area of heavy focus early in the season.

“We could definitely do a much better job blocking shots [on the penalty kill]” captain defenseman Ryan Grimshaw said. “But I think a lot of kids are ready to get their bodies in front of pucks.”

Despite a tough loss, Harvard will take a few positives away from the game. While the penalty kill struggled, the Crimson’s power play was strong.

Of the four power plays it drew, Harvard converted on one and scored just as another expired.

Michalek made 34 saves in net, including two impressive stops on Tiger breakaways in the third period to keep Harvard within striking distance.

Princeton did score four goals, but two came on rebounded loose pucks in front of the net.

Along with McNally and Michalek, forwards Colin Blackwell, Tommy O’Regan and Petr Placek, and defenseman Max Everson all saw their first game action for Harvard.

While the Crimson players hope to avoid playing from behind in future games, there was a silver lining to be found in the close loss.

“It does speak a lot to the character we have of this team,” Grimshaw said. “We battled back.”