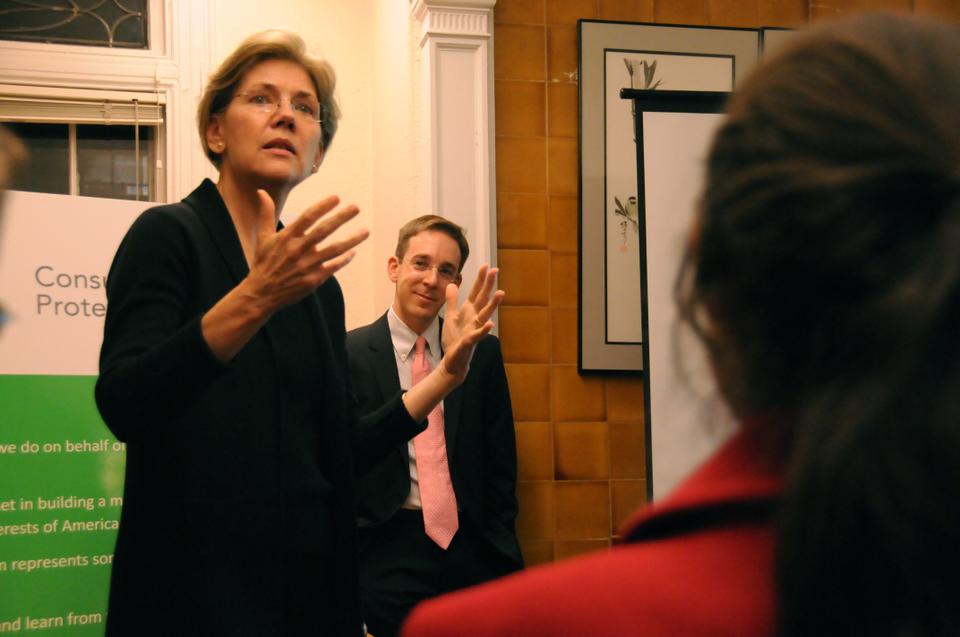 Elizabeth Warren talks about the innovative nature of the Consumer Financial Protection Bureau to an audience at OCS yesterday.
By Laya Anasu, Contributing Writer

Harvard Law School professor Elizabeth Warren has spent the past two months campaigning across the state in her bid for the U.S. Senate, but she visited the Office of Career Services on Monday not to recruit voters but to recruit workers.

Warren spoke to students interested in working for the newly-established Consumer Financial Protection Bureau, an agency which she helped found in Washington last year.

“The CFPB really is the coolest place ever in the world,” Warren said. “It is such an important part of the government.”

The CFPB, which aims to enforce consumer finance law and educate consumers, was created in 2010 by the Dodd-Frank Wall Street Reform and Consumer Protection Act in reaction to business practices on Wall Street which many have blamed for the 2008 financial crisis.

Warren, who specializes in consumer protection law, helped establish the CFPB and many on the left hoped that Obama would appoint her to be the Bureau’s permanent director. But anticipating Republican opposition to Warren, President Obama chose a different nominee and kept Warren on as an advisor. She recently stepped down to pursue her candidacy for Senate.

During the fledgling Bureau’s first visit to campus Monday, officials said that they hope to attract Harvard students as employees.

“Our mission is to serve, lead, and innovate,” said Ethan S. Bernstein, CFPB chief strategy officer and a Harvard Business School and Law School graduate. “This is a mandate that no one else has received: protect the American consumer in financial transactions.”

Warren described the CFPB as an independent organization with “highly credentialed people” who advise consumers or research financial regulation.

She narrated the history of consumer law dating all the way back to the Code of Hammurabi. The regulatory laws passed in 2010, she said, inaugurated a new era of consumer protection.

“We don’t have a legacy of doing this badly,” Warren said, arguing that the 2010 law gave the CFPB a blank slate to redesign regulations. “We got to build this in the aftermath of looking at history. We are building our own history and tools.... We are an agency whose point is to work for the people.”

About 30 students attended the event, where Warren spoke along with other CFPB representatives.

Alexander J. Blenkinsopp ’05-’06, a former Crimson editor, current Kennedy School student, and speaker at the event, said that while Warren is “extremely busy” as she campaigns for Senate, “I’m not surprised she made the time to speak with students about the agency. She was an inspiration to all of us at the Bureau, and that’s why alums like me came back to talk about our experience working there.”

Warren said she misses her work at the agency, which she left in the summer of 2011.