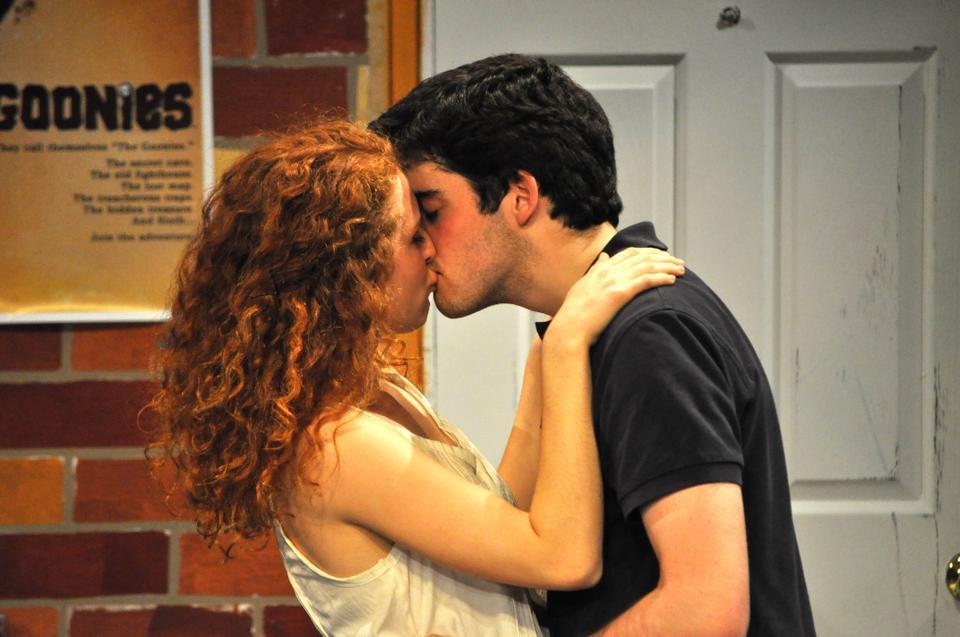 Jessica (Anna A. Hagen '15) and Warren (Ben J. Marek '14), share a passionate kiss in a friend's apartment after multiple heated arguments in "This is Our Youth" at Adams Pool Theatre.
By Natalie T. Chang, Contributing Writer

What would you sell your childhood for?

That is the question that plagues Warren Straub (Ben J. Marek ’14) as he crouches on a floor strewn with blankets and empty bottles and surveys the antiquated memorabilia he has stuffed into a battered brown suitcase. As Dennis Ziegler (James C. Butler ’15), practically trembling with anger, looms over him, Warren looks away from his keepsakes. “Sell ’em,” he tells Dennis. “I don’t know what else to do.” This tone of combined desperation and resignation, punctuated by moments of sheepish humor, permeates the Harvard-Radcliffe Dramatic Club’s production of Kenneth Lonergan’s “This Is Our Youth,” directed by Cagla G. Seten ’13 and Katherine L. Price ’14. Subtle yet poignant acting underpins this pithy tale of lost innocence, though the arresting narrative is occasionally marred by stilted and inconsistent stagecraft.

“This Is Our Youth” chronicles the evolving relationship between the two male leads as Warren seeks refuge in Dennis’ disorderly Manhattan apartment. Having recently stolen $15,000 from his wealthy, tyrannical father after being thrown out of his house, Warren hopes to escape the ennui of his structured young-adult life in the way he believes Dennis has. Dennis, continually amazed by the supposed stupidity of his worshipping friend Warren, insists that Warren return the money immediately. Warren, however, is determined to use his new funds to impress his acquaintance Jessica Goldman (Anna A. Hagen ’15). After doing so, and losing his virginity in the process, Warren agrees to the unlikely scheme Dennis cooks up to earn back the lost money—a plan which involves both drug deals and the sale of Warren’s precious childhood souvenirs.

The play, set in 1982 and first performed in 1996, retains its relevance today with enduring themes of trying to find meaning and purpose in aimless 20-something life. Dennis and Warren both sporadically experience surging moments of optimism and ambition, tragically convinced that they will one day achieve something significant and vindicating; at other times, they realize the futility of their efforts and embrace meaninglessness. This dichotomy is mirrored in the twisted friendship between the two young men, as Warren’s frantic, nervous energy and constant chatter are consistently subdued by Dennis’ furious commands to “shut up.” Butler imbues Dennis with the easy, demeaning confidence of an idol all too aware of Warren’s adoration, but is equally adept at hinting at Dennis’ profound insecurities through simple shifts in posture and vocal timbre. “You don’t think I’m on your side?” Dennis practically screams at Warren at one point. He repeats the line a moment later, but by injecting the words with a childish pain he suggests that he needs Warren’s approval despite his charade of bloated arrogance.

Marek, a less pronounced but equally compelling presence on stage, charts the transformation of Warren’s character with nuanced body language. The naive Warren seen in the opening of the play is fidgety and self-conscious; by the end of the play, the mere act of sitting down seems to exhaust him. Hagen, meanwhile, seems to doubt her ability to channel Jessica’s character, though she proves capable of showcasing a sudden change of heart towards Warren with a single look. At times, her overexcited stage movements and lines—such as an awkward and forced “Let’s wake this dump up!”—feel exaggerated beyond credulity.

Her uncertainty, however, may be due in part to irregular stage direction that often leaves the three actors unanchored. The majority of movements occur infrequently and spasmodically, with characters suddenly standing up or deciding unanimously to sit down at the table after a lengthy conversation that was physically static. The minimal lighting effects, meanwhile, tend to distract and bewilder as the spotlight’s brightness fluctuates with no discernible trigger.

Significantly more effective are the few props that become characters’ ties to world outside Dennis’ apartment, where the entire play takes place: Dennis’ telephone is the only link with external events, while Warren’s old baseball hat becomes a symbol of the past he involuntarily discards. Ultimately, though, it is the actors who convincingly display the tension between the fear of being unremarkable and an inability to take action. That universally relatable feeling of unease ensures that “This Is Our Youth” remains as resonant today as it was 15 years ago.