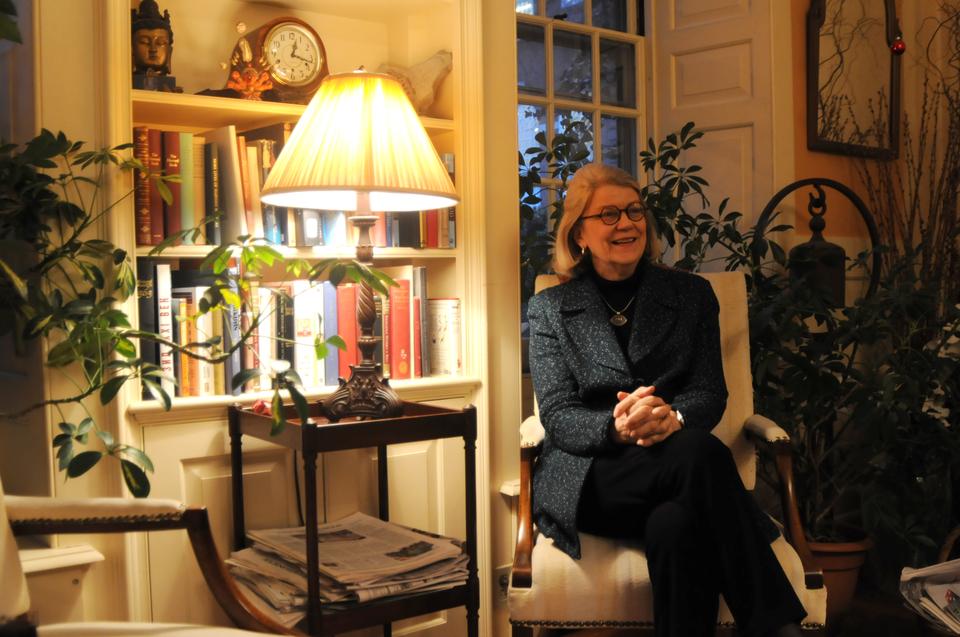 Ten questions with one of Lowell's House Masters.
By Mattie Kahn

1. Fifteen Minutes: As the first gay couple serving as House Masters at Lowell House, do you feel a responsibility to advocate for or act as a representative of the gay population?

Diana Eck:  We do advocate. We’re not the world’s biggest gay activists, because both of us do have other jobs. Not all gay people are gay activists. We’ve been involved with the court cases in Massachusetts, when marriage was made finally legal. And we went right down to City Hall and got a marriage license. We were married in 2004, on the 4th of July. And it was wonderful. We sang “My Country ’Tis of Thee” at the wedding. But I think that the way that we’re most effective is that we are basically a gay couple. When we greet all the parents at Junior Parents Weekend, or all the families and all the grandmothers and the cousins at commencement, we’re ourselves. There are many families that have never actually met a gay couple before. And so who knows what’s in their minds! But in our mind, it’s just, “Hey! These are the moms and dads of our students.” I think that level of normalization is really good.

2. FM: In what capacity did you first arrive at Harvard?

DE: Actually, I went from Smith College to The School of Oriental and African Studies in London and studied Indian history and South Asian history. I ended up in Cambridge for a variety of reasons, but I couldn’t find a really good job, so I worked as a receptionist in Harvard Square with a master’s degree from University of London . . . And as I was doing that I thought, “if I’m going to be sitting around all day, I think I better go to graduate school.” So I did; I applied. Once I finished graduate school, Harvard was just about convinced that it was okay for undergraduates to undertake religion as a major, because up until that time you could only do religion as a special concentration, which was ridiculous.

3. FM: Tell me a little about the Pluralism Project.

DE:  The pluralism project started in 1991, and it really began with the changes in the demographic composition of Harvard. These changes at Harvard got me interested in things that I hadn’t been paying much attention to. I’d always been studying religious life and religious communities in India, but now a lot of those religious communities were right here and no one was paying much attention.

There are really three kinds of questions that we ask. One is: “Who’s here and what is their history?” The second is: “How are these traditions changing in the American landscape, as they become more ‘American’?” And the third is: “How is America changing, as we become truly multi-religious?” It’s always been part of our blueprint, I suppose, but now there are a lot of new things that have happened.

4. FM: This year we marked the tenth anniversary of 9/11. How do you think that event changed our perceptions of religious difference and pluralism?

DE: It really amplified much of what we had already been looking at in the Pluralism Project. America has a long history of the people who were already here being wary of newcomers. But now the “belongers,” you might say, in American society were suddenly seeing a lot more people they considered to be strangers. Non-Muslim Americans began to become much more aware of Muslim communities in their own towns. For a while after 9/11 there was a lot of outreach on both sides because there was just this huge, awful thing that had happened. That was at the beginning. And then, once the Patriot Act had been enacted, people followed the lead of the government and became rather suspicious and more scrutinizing. And then most recently, I think we would have to say, quite frankly, that the wave of hostility to Islam that has happened in the past couple years was very largely politically motivated. I think that we need to be fairly astute about the fact that this is not a direct response to 9/11. It’s a political response that has been engineered over the past couple of years.

5. FM: You talk about diverse societies extensively in your work. What’s your current metaphor for cultural pluralism?

DE: I don’t use “melting pot,” because a melting pot is a kind of assimilationist view. And yet a “mosaic” gives the impression of these various different colored pieces that fit together, and it’s all very beautiful. I think jazz music would be a better one now. We’re making something out of differences. It’s not always total harmony either, but we’re working at it. My metaphor is not mosaic, it’s not salad bowl, it’s not melting pot. It’s really music.

6. FM: Are you satisfied with Harvard’s efforts in pluralism?

DE: I think so, certainly. What the students do is almost more important than what “Harvard” does. What the students do is have some pretty active interfaith groups. They have very active cultural groups and religious groups. I’m on one of the committees that’s advising the president on how to find a new minister and professor to take over Memorial church. One of the things that’s very much on the President’s mind is that, in this day and age, whoever is there needs to have a very astute awareness of the importance of cultivating communication and understanding across religious communities.

7. FM: In addition to your professional area of expertise, you’ve also published a book about your personal spiritual journey. Do you think there’s such a thing as cross-religious common spirituality?

DE: I was a Christian kid who grew up in the mountains of Montana, but I learned a lot about faith and about my own faith from the Hindus that I’ve lived with. I feel quite, not only at home, but embraced in Hindu or Muslim or Buddhist or Sikh communities. That’s a tremendous gift—to experience the hospitality of others. These are not moments of dogma; these are the moments in which we talk about what deep meaning things actually have.

DE: I think religious utopia, if there is such a thing, is in the cities of the future. My hope for the future is that in the cities in which we live, we will have not only religious difference and religious color, but an increasing number of what I sometimes call the interfaith infrastructure. One thing you could say for sure since 9/11 is that the number of interfaith initiatives across the country has probably quadrupled. Now they’re everywhere.

9. FM: You’ve lived some fairly adventurous spiritual experiences in the course of your journey. Was there ever a moment where you burst out laughing? Where you couldn’t control yourself?

DE: There are moments like that. Well, I’ll tell you one. Dorothy and I were traveling in South India, and poor Dorothy, she’s been to every temple. We were in one of the very beautiful Vishnu temples in Tamilnadu—it’s on an island in the middle in the Kaveri River—and I was trying to explain to Dorothy, “This is Vishnu here and the two consorts, Shri and Bhu.” And I said to her, “Bhu went to Wellesley.” And we both just started laughing! Because I went to Smith, and there was this idea that everyone had these names: Bhu and Banana and Perky. And we both had sort of had it with our spirituality, and when I said, “Bhu went to Wellesley,” we both lost it. I think the Hindu tradition is one in which humor is really a big part. Because there are just so many gods! And they have so many heads and arms and expressions!

DE: Hi, Dorothy! I was just talking about how Bhu went to Wellesley.

10. FM: Last question. What’s the most enduring custom that you’ve incorporated into your life from all of your various experiences?

DE: That’s an interesting one. Namaste is the most common reflex I have when I meet people. I’m actually not a very good hand-shaker. I mean I do shake hands with lots of people. You have to. But it is much more natural for me, and I like it better, to offer this greeting of Namaste—a genuinely reverential greeting to one another.