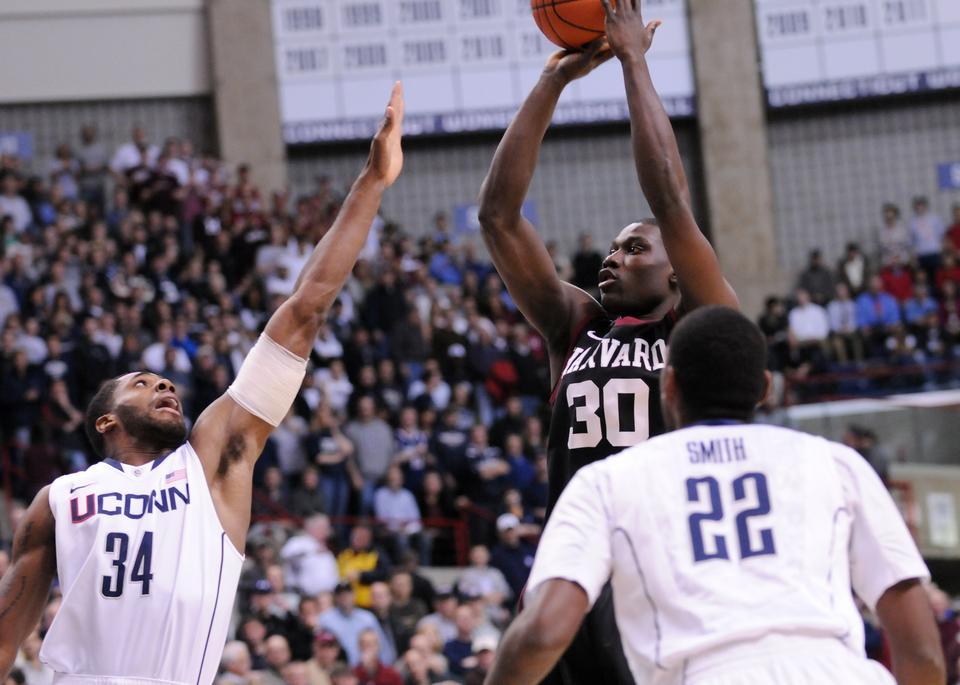 BOSTON—If there's any non-Ivy coach who can testify to the development of the Harvard men's basketball program since the arrival of coach Tommy Amaker, it is Boston University's Joe Jones.

Jones has faced a Harvard team for nine years in a row: first as a head coach at Columbia from 2003-10, then as an assistant at Boston College last season.

But the latest edition of the Crimson may be the best that Jones—now in his first year with the Terriers—has ever seen.

"To see where [Amaker's] brought this program is amazing," Jones said. "He has brought some guys in that are committed, very skilled and tough, and they play a great brand of basketball ... That's what I saw on film, and it rang true tonight."

Led by junior Kyle Casey's game-high 20 points and nine rebounds, No. 24/25 Harvard cruised to a 76-52 rout of BU Saturday afternoon at Agannis Arena.

Sophomore Laurent Rivard had 18 points on 6-of-7 shooting from beyond the arc and junior Christian Webster added 14 points for the Crimson (9-1), which bounced back from a 67-53 loss at No. 9/9 Connecticut Thursday.

Guard Darryl Partin—the nation's third-leading scorer entering the contest—led the Terriers (4-6) with 12 points on 5-of-16 shooting from the floor, while teammate D.J. Irving had four points. Both were held at least 10 points below their season scoring average.

"They were able to guard [Irving] a little bit better individually than most teams," Jones said. "There aren't a lot of guys that can guard the way [junior guard Brandyn Curry] can ... Hat goes off to him. He was able to keep him out of the lane at times, even individually, which a lot of guys can't do."

The preseason pick to win the America East conference, BU shot 31 percent from the field and 5-of-18 from three in suffering its third straight loss to the Crimson.

"I was very pleased with our defense," Amaker said. "I thought our defense was as good or better than we've played all year."

The Terriers took an 18-17 lead on Partin's baseline jumper with 7:43 left in the first half, but Harvard closed the period on a 19-4 run. Webster—who turned in his first double-digit scoring performance of the season—and Rivard combined for 14 points in the span.

"They were really chasing us, and at some point their defense broke down, so we were able to get open shots," Rivard said. "And we knocked down those open shots."

After sitting out much of the first period with two fouls, Casey took control after halftime, notching 17 points and six rebounds in 14 minutes of action.

The junior picked up an easy two-handed slam dunk on Harvard's opening possession and drove for a layup one minute later to make it 41-21.

The Crimson's advantage dipped to 17 on a pair of free throws by Patrick Hazel at 8:21, but Curry drove across the lane and found Rivard in the right corner for his final three-pointer of the day. Curry finished with a game-high seven assists.

A Curry steal with under seven minutes to play led to an emphatic jam in transition by Casey, and the visitors' lead never fell below 20 again.

The Crimson had 19 assists, eight blocks, and several highlight-reel dunks on the afternoon—much to the delight of the arena's section 105, which was filled with vocal Harvard fans. A total of 3,010 took in the action at Agganis, which hadn't hosted a Terriers men's basketball game since March.

The Crimson's lead grew as large as 29 with 3:15 to go, allowing Amaker to empty his long bench.

Highly-touted freshman Kenyatta Smith converted the first field goal of his collegiate career, and sophomore Matt Brown—also a receiver on the Harvard football team—saw his first action of the season and had two points.

Off 12 days for final exams, Harvard will now wait to see if it will remain in the ESPN/USA Today coaches and the Associated Press Top 25 polls, which it entered for the first time in school history last Monday.

"It's nice to be in the rankings," Casey said, "but we're really just focused on us right now ... The rankings are more important at the end of the season."