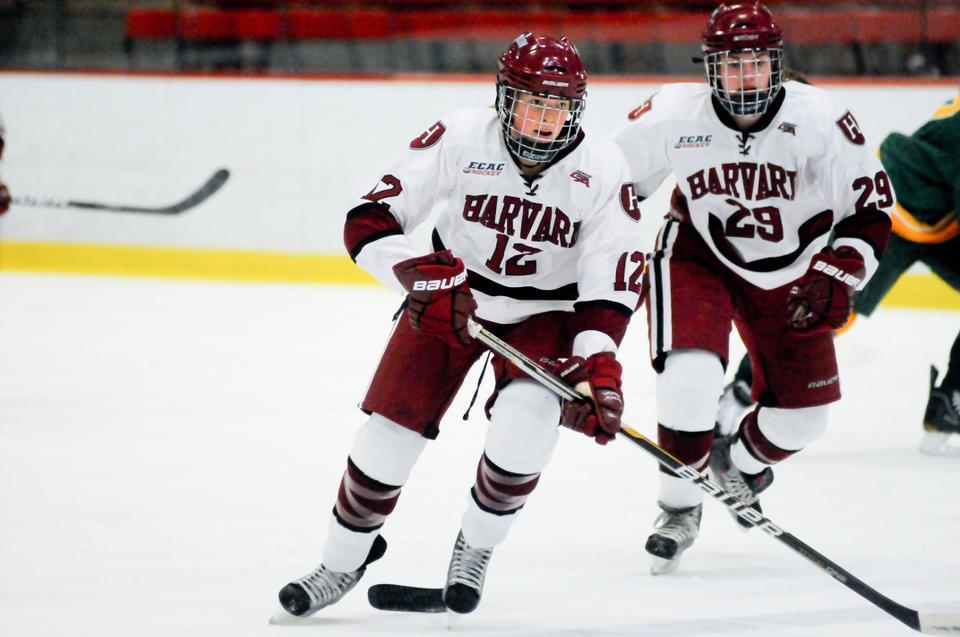 Rookie Samantha Reber, shown above in previous action, participated in the first line of forwards that quickly put the Crimson on board in the first period. Reber finished the game with two goals against UNH.
By Christina C. Mcclintock, Crimson Staff Writer

The student has become the master.

Harvard (8-4, 6-2 ECAC) dominated the puck from the first whistle. The first line of forwards—which consisted of junior Jillian Dempsey, sophomore Lindsey Fry, and freshman Samantha Reber—was particularly effective at challenging the Wildcats (6-11-3, 0-6-2 Hockey East) and goaltender Moe Bradley, adding to the overall good play shown by the Crimson. Four minutes into the period, the first line efforts paid off. Junior defenseman and assistant captain Josephine Pucci fired the puck from the blue line toward Fry, who fired the puck at the UNH net. While Bradley made the initial save, Dempsey grabbed the rebound and stuffed it into the net.

“I just liked the pace of our game,” Stone said. “I thought our sense of urgency was good [Friday night].”

After Harvard drew first blood, UNH picked up its pace and gave the game a more back-and-forth feel, but the Wildcats were never able to significantly threaten the Crimson cage. As the period wore on, UNH’s attack wore off, and Harvard regained control.

With a little over a minute left in the frame, Crimson junior forward Kaitlin Spurling received the puck and skated it down to the left circle before sending it past Bradley to put Harvard up by two.

Seven minutes later, the Crimson had a three-goal lead when Reber knicked in a shot from classmate Sarah Edney 5:52 into the second period. Edney, a defenseman, had received the puck from Pucci, who had been directing play from the point.

“It was interesting because early on in our season, the defensemen were doing a lot of scoring,” Stone said. “They’re starting to pass it off to the forwards, which is good because it should be balanced.”

“It’s awesome to see everyone contributing,” Pucci added, “Getting more forwards scoring more goals—I think it’s a result of players getting more acclimated with each other.”

Three minutes later, Fry made it a four-goal advantage. The sophomore skated down the center lane of the ice before veering to the right circle, where she fired the puck past the unsuspecting Wildcat defense.

Fry’s goal proved to be a wake-up call to UNH, who again went on the offensive. This time it paid off. A scrum in front of the net caught all of Harvard’s skaters on one side of net, leaving Wildcat forward Nicole Gifford wide open on the other side.

UNH’s Kristina Lavole took notice and sent the puck behind the net to Emma Clark, who passed it to Gifford. While Crimson junior goaltender Laura Bellamy stopped Gifford’s first shot, Harvard was unable to clear the puck, which instead bounced back to Gifford. The forward put it away on her second attempt at 17:12 in the second frame.

Undeterred, the Crimson opened the third period with the same aggression it had shown all game.

“We responded well after that first goal,” said Bellamy, an assistant captain for the team.

This time, Harvard shifted its focus towards taking more shots, rather than waiting for the right opening.

“One of the things we talked about after the second period was we were over-passing,” Stone said. “I thought we did a great job of moving the puck coming up the ice, when it got into that tight scoring area … we kind of over-passed versus putting pucks in the net.”

The Crimson’s intensity paid off when Reber scored her second goal of the day off a cross-ice pass from Fry at the 7:46 mark in the third period.

Part of Harvard’s success came from its ability to stay out of the penalty box for its first 54 minutes of ice time. But in the final six minutes of the game, the Crimson’s skaters found their way to the penalty box, which gave the Wildcats the opening they needed to find the back of the net. Facing a 5-3 advantage, UNH’s Maggie Hunt scored with two and a half minutes left in the game.

“I’m disappointed with the fact that they got two goals because I thought we could have eliminated that,” Stone said. “Overall, we were penalty-free until the very end, which is really good for us.”

The victory was Harvard’s second in as many days, as the Crimson had defeated Providence in an away contest the night before. Harvard’s skaters now turn their attention to reading period and finals and won’t play another game until January.

“I think [performing well during reading period is] a testament to our preparation,” Stone said. “We gave them last week off so that they had plenty of time to study and rejuvenate … it wasn’t something that was a distraction to them at all.”