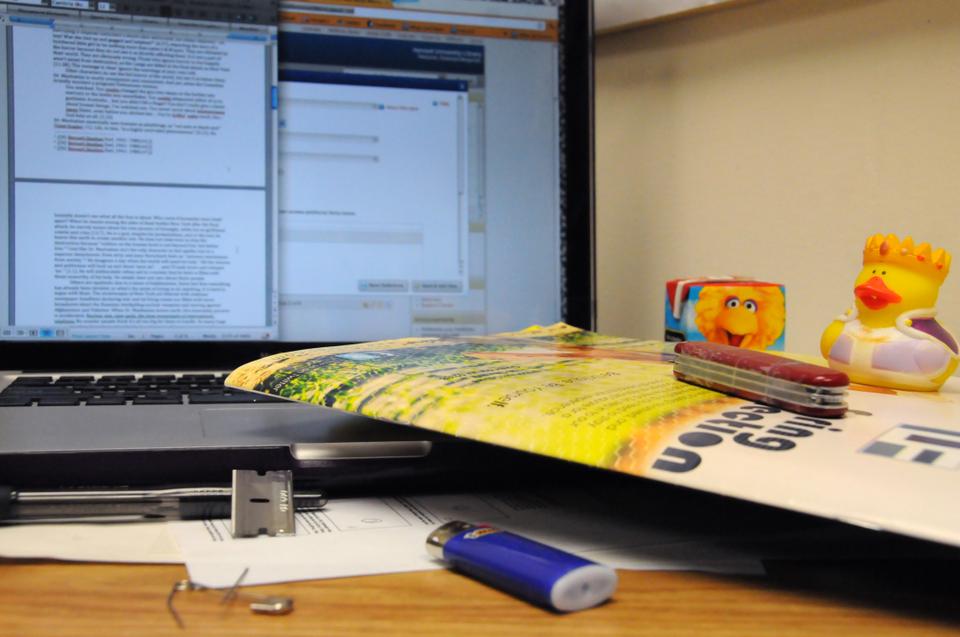 When students harm themselves the marks often go unseen, but the percentage of undergraduates who have intentionally injured themselves in their lifetimes is stunning.

More than 15 percent of undergraduates nationwide have harmed themselves and 6.8 percent have done so in the past year, according to a study published in the Journal of American College Health in November.

Harvard’s Director of Behavioral Health and Counseling Paul Barreira said Harvard’s rate is slightly lower than the national average, but he declined to offer a more specific figure. Barreira served as a researcher on the study.

These national statistics are reflected in the lives of three Harvard undergraduates.

Interviews with these students, who have harmed themselves during their time at Harvard—two by cutting and another by inflicting non-scarring injuries—reveal that self-harm is a real phenomenon even within the ivory tower. They say that while Harvard offers a number of ways to seek help—whether professional, student-run, or simply social—often the fear of repercussions and an intense concern for privacy leave them to cope alone.

THE BEGINNINGS OF SELF-HARM

Now a senior in Eliot House, Anna started cutting at 13. She was one of three undergraduates interviewed for the story, all of whom have had their names changed in the story so they could speak comfortably about their experiences.

Anna said she learned about cutting on teen self-help forums.

“I remember thinking, ‘Why would anyone ever start doing that to themselves?’” she said. “But by the time I resorted to trying it, I was thinking that if it worked for somebody else, then it might work for me too.”

At 15, Anna “quit.” During high school, she relapsed occasionally, leaving behind scars on her wrists. In the years before college, she had it under control, she says. But at Harvard, it got worse.

“It was very stressful,” she said. “Not being a top, straight-A student took a toll on me, so back in freshman year, I didn’t hold back.”

Research shows that students harm themselves for a number of reasons. Some use it as a way to cope with negative emotions, others hurt themselves to gain a sense of control, and still others use it as a means of punishing themselves.

“I was always able to feel ... this impulse coming through my arm, but the pulse would stop when I finally did it,” Anna said, referring to her cutting. She says that she cuts as a method of coping. “I would try to postpone, postpone, and postpone, but it’s all I could ever think about.”

Elizabeth, a sophomore, didn’t start cutting until she arrived at Harvard.

“I guess it was a combination of transitioning and stress,” Elizabeth said. “It was something impulsive, to get off frustration. I found it did help, and so it became a habit. It became an addiction.”

For John, a senior, self-injury started long before his college years.

He traced his history of depression back to the age of 9, when he first vocalized suicidal intentions.

“I was 11 when I started cutting myself,” John said. “I didn’t know the exact motivation for what I was doing—I just think I knew that I wanted to hurt myself because I was sad, because I felt bad about myself.”

In an attempt to keep his self-harm secret, John began to grow cautious, making sure not to leave marks.

Cutting and scratching, while the most visible forms of self-injury, are not the only methods. Some use burning, biting, and punching to inflict pain.

“I stopped injuring myself for quite some time,” John said. But by sophomore year of college he had started again.

“I never engaged in cutting again, but I would stab myself with pens, run my hands through overly hot water, bite my fingers—nothing that left permanent marks,” he added. “But even with the intent of calming myself, I actively caused myself pain as self-punishment for expressing low-self esteem.”

Each of the three self-injurers had vastly different encounters with their peers at Harvard, though they agreed that the high-pressure environment can be unsettling.

“My experience here is that, independent of resources through Harvard, students themselves can be incredibly callous,” John said. “There is a tendency to view other people’s problems first through the lens of how they impact you.”

The three students agreed that, particularly at Harvard, there is an expectation that they project an air of perfection.

“There are people here who are very mentally unhealthy but have good grades and great jobs,” John said. “People react to you or think there is a problem only when you stop succeeding.”

Anna said that she has seen her peers talk about self-harm in two ways: either they say they could never understand doing it themselves but express sympathy for those who are hurting, or they act flabbergasted at the idea of self-harm.

“These other people have no clue about it,” she said. “And there is this underlying assumption that because we’re in Harvard, we’re high-achieving, well-adjusted individuals—so why would we do something this stupid or this dangerous?”

After pausing a moment to reflect on her experience, she said, “I’ve gotten a lot of that.”

The three students said they have had different levels of success at hiding their behavior.

Many self-injurers face the task of hiding scars on a daily basis, taking care not to show a certain arm or to go out with long sleeves.

“A couple of people notice, but I just kind of made up an excuse for it,” Elizabeth said. “It’s something people don’t really talk about or want to know.”

While two of the self-injurers firmly stated that nobody notices, Anna said she thinks her peers have seen her scars.

“I noticed people never asked about them [the scars],” Anna said. “I just thought people were oblivious or stupid and didn’t notice—that was until I had someone ask a friend of mine about the scars.” She shifted back in her chair for a moment. “It’s not that people didn’t notice but that they were not comfortable asking.”

Nearly a quarter of self-injuring students stated in the November study that nobody knew of their behavior, with only about 17 percent of those in therapy disclosing their self-harm to a health practitioner.

The University tries to address the issue of self-injury in a number of ways, hosting freshman workshops focused on case studies and suicide prevention training for student groups. A number of peer counseling groups offer their services on campus, including Room 13. Next term, a member of Harvard’s Student Mental Health Liaisons hopes to begin an educational campaign on self-harm, according to Barreira. Furthermore, students can seek counseling from University Health Services or the Bureau of Study Council.

For a number of reasons, students can be reluctant to seek help.

“Students’ concerns about how their friends, roommates and others will react to knowing that they have engaged in self-injury does hinder students’ willingness to seek help,” Barreira wrote.

John went off campus for help, fearing that he might get asked to take a leave of absence if he spoke to Harvard officials.

“There is a lot of mystery to what degree of seeking help will result in being asked to leave campus,” John said.

Barreira wrote that the University does not have a blanket policy for students who come forward with self-harm related issues.

“Any decision about a student leaving campus is an individual decision based on unique circumstances of the student and is done in consultation between the students’ treaters (if there are any), the student, and the college,” Barreira wrote.

All three students have stopped self-injuring.

For Anna, it took an epiphany during junior year. “It was a wake-up call,” she said. “I told myself, ‘I’m 21 years old, I’m a grown-up, and I’m going to graduate soon—but I’m dealing with things in a non-healthy way.’”

Wanting to learn how to cope the way “normal people do,” she said that began to visit UHS, complaining initially of suicidal thoughts and then addressing her self-harming.

She continues therapy once a month and has not hurt herself since last December.

“I give myself little goals,” she explained. “It used to be that I told myself ‘you can’t do it, you can’t do it,’ and that made me want it more. Now I don’t say no; I just give myself five more minutes to reevaluate and see where I am. Normally within five minutes, those intense waves of emotion usually have dampened.”

For Elizabeth, she said her friends have supported her through her self-injury. “Instead of internalizing it and taking it out on yourself, I tell a friend, take my frustration out in words, or listen to music, or dance to it,” she said, smiling. “You don’t normally think it helps, but it’s just trying to ease the need.”

As someone free from self-injury for two months, Elizabeth stressed building a community of supporters. “It’s important for them [self-injurers] to know there is a friend out there that they can trust,” she said.

Still, the urge to self-injure does not always go away permanently. “It’s easy to return to those behaviors after not doing it for some time,” said John, who has not injured himself since sophomore year. “Being vigilant is important.”

—Staff writer David Song can be reached at davidsong@college.harvard.edu.