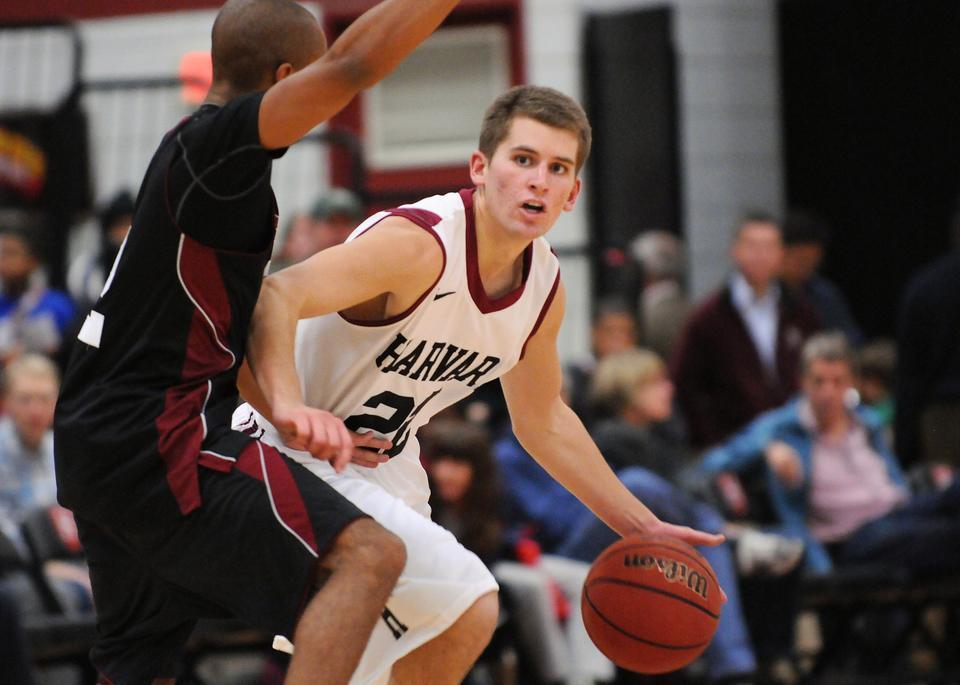 CHESTNUT HILL, Mass.—For the fourth straight year, the No. 23/24 Harvard men’s basketball team came out on top over cross-town rival BC at Conte Forum. But unlike the previous three victories over the Eagles (5-8), Thursday night’s contest was not an upset.

The Crimson (11-1) earned its third straight victory since falling to UConn on Dec. 8, 67-46, simultaneously ending a streak that saw the Eagles win three games in a row by double digits.

Harvard is currently 4-0 against Massachusetts schools, after taking home wins against Boston University, Holy Cross, and MIT earlier this year.

“It’s definitely something we take pride in, when we match up against other Boston-area teams,” said junior point guard Brandyn Curry. “But [the matchup against BC is] just another game. We have to come out and take care of business.”

Although the win on Thursday night leaves Harvard’s seniors with a perfect 4-0 record on the road against BC, the Eagles still hold a large edge in the all-time series, 32-13.

The Crimson started off the evening ice cold, scoring just three points—all from the free throw line—in the first six minutes of play, as BC took a commanding 14-3 lead. It wasn’t until 6:02 had expired that Curry knocked down Harvard’s first field goal of the game.

Luckily for the Crimson, hot shooting started to kick in, and the visitors staged an early comeback. Down 20-13 with just under 10 minutes to play in the first half, sophomore Laurent Rivard knocked down a three to put the contest within range. Rivard went on to score 18 points for the Crimson, including 15 first-half points and four threes, to help Harvard secure a seven-point lead heading into halftime. The sophomore was 7-for-12 from the field on the night.

“We are good shooters, and we haven’t really shown that [so far], in the first month of the season,” co-captain Oliver McNally said. “We wanted to attack them through ball screens, and I think we did a good job of that.”

In the second half, freshman Corbin Miller picked up where Rivard left off, scoring 12 points on 4-of-5 from behind the arc.

“Corbin [came] off the bench with a lot of confidence,” McNally said. “He’s a kid who can really play offensively, and he showed that today by hitting some big shots.”

Behind solid long-range efforts from Miller and Rivard, Harvard was an impressive 10-of-20 from three-point range.

“The key [was] Corbin Miller [who] hasn’t played much this year,” said BC coach Steve Donahue of Harvard’s success from beyond the arc. “You have to give him credit. Rivard was really locked in early on.”

The Crimson held its cross-town counterparts to 3-of-11 from downtown—a season low for an Eagles team that averages seven made threes per game.

Freshman center Dennis Clifford led the Eagles in scoring with 14 points, seven of which came in the first half. The seven-foot tall rookie proved to be a big factor early in the game, with four points in the first five minutes of play.

“Their freshman [Clifford] is a really good player,” McNally said. “He attacked us pretty well in the beginning, but we also have two really good big men.”

But the Harvard defense—which combined for 12 steals to help force 17 BC turnovers—held the duo of Clifford and freshman forward Ryan Anderson to a combined 16 points on the game.

“It was tough to give a lot of help [down low] from the perimeter because we wanted to focus up on the shooters,” McNally said. “They shoot the three really well. [It was about] our big men manning up, staying in front of them, and making them take tough shots.”

“[BC was] hitting shots in the beginning of the game,” he continued. “I think we really locked them down and made them take tough shots later on.”

Co-captain Keith Wright contributed eight points for the Crimson down low, while the Eagles defense held junior forward Kyle Casey to just two points. Harvard pulled down 36 rebounds on the night while allowing BC 22 and just four offensive boards.

“They’re content with winning,” Donahue said. “That’s when you get a dangerous team. When they’re open, they shoot. If they’re not, they move the basketball.”