No. 24 Harvard Tripped Up By No. 9 UConn in Storrs 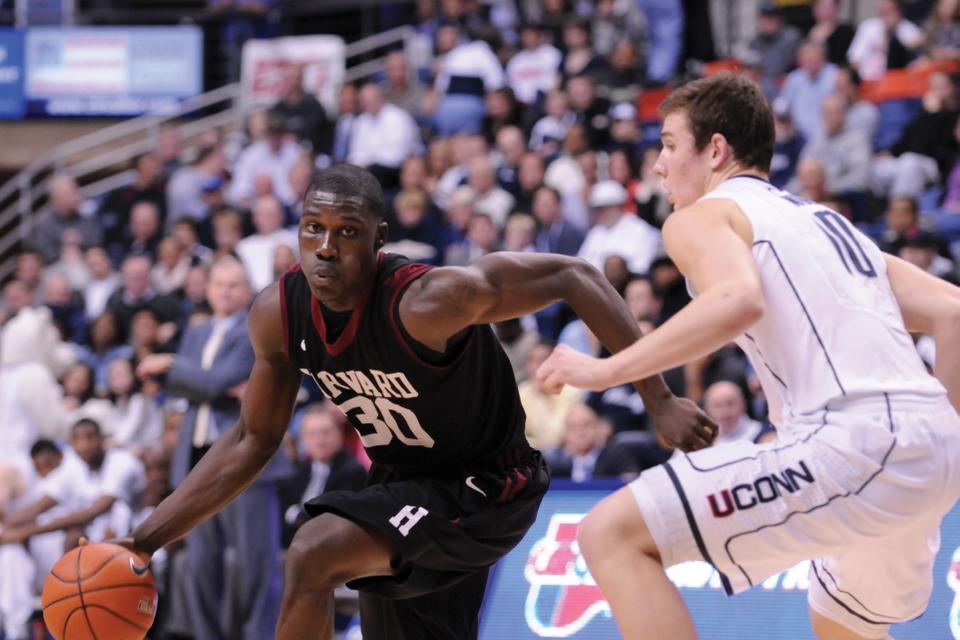 Kyle Casey led Harvard with 12 points, but his effort was not enough in Harvard's first loss of the season.
By Scott A. Sherman, Crimson Staff Writer

STORRS, Conn.—For a half, at least, Harvard proved it belonged.

After earning the first national ranking in the program’s 101-year history this week, the No. 24/25 Crimson men’s basketball team was thrown right into the fire, playing defending NCAA champion No. 9/9 UConn on national television in front of a sellout crowd at Gampel Pavilion.

Harvard (8-1) hung tough through the first half against the NBA-level skills of Jeremy Lamb, Shabazz Napier, Andre Drummond, and others, and went into the break down just 30-28.

But in the second, the Huskies (8-1) proved to be too talented for the nation’s new favorite underdog, coming out of the locker room with a 15-2 run and never looking back en route to a 67-53 victory.

“Overall [it was] a pretty good performance against a team that will probably win 25, 26, 27 games,” said UConn Hall of Fame coach Jim Calhoun. “That’s a pretty good team we just beat.”

Down two with the ball coming out of the first half, junior forward Christian Webster missed an open three that would have given Harvard the lead. Lamb responded by knocking down a trey at the other end to put UConn up five.

“We had to come out with defensive intensity,” said Lamb, who finished with a game-high 18 points and seven rebounds. “They’re a real hardworking team, and we knew we needed to get stops to make a run.”

Neither team scored for three minutes after that, but Napier drilled a long ball with 16:24 to go to put the Huskies up, 36-28.

Co-captain Keith Wright responded at the other end with a layup, but UConn came right back with a three from Ryan Boatwright—the final piece of the Huskies talented trio of guards—to extend the Connecticut lead back to nine.

“I think they increased the pressure, forced us into some bad things and some quick things,” Crimson coach Tommy Amaker said. “Their perimeter play was outstanding.”

Junior guard Brandyn Curry was fouled on Harvard’s next possession and hit one-of-two from the line, but UConn then went on an 8-0 run highlighted by two Lamb jumpers to extend the Huskies’ advantage to 47-31.

The Crimson answered with an 8-0 run of its own on a Laurent Rivard three and five Wright points to cut the deficit to eight with 10:08 left.  But then it was UConn’s turn for another spurt, and after a Drummond dunk, Lamb three, and Boatwright jumper, the lead was back up to 54-39 three minutes later.

“We tried our best to make a run at it, but they’re so crafty with the ball and certainly what they can do on the backboard limited our effectiveness around the goal,” Amaker said. “We couldn’t get anything easy around the basket.”

The Crimson was able to cut the deficit back to seven, 58-51, after a Casey three with 4:51 remaining, but Tyler Olander responded with a jumper, and Curry and Casey turned the ball over on Harvard’s next two possessions.

Rivard missed back-to-back threes as the game wound down, and the lead escalated to 14 at 67-53 on two Boatright free throws with 1:04 left. That’s where the final score would stand, with the loss ending the Crimson’s perfect season and likely knocking it out of the Top 25 a week after it entered.

But the Crimson battled and hung with the Huskies throughout the first half despite being undersized in the frontcourt and less athletic in the backcourt.

The teams went back-and-forth for the game’s first 12 minutes, with neither team able to take a lead of more than three. Harvard got out to a quick 7-4 advantage on a Webster three and a Curry-to-Casey alley-oop, but UConn came right back with a 5-0 run capped by a DeAndre Daniels long ball.

With 6:44 left in the half, the Huskies opened up a nine-point lead at 28-19 with a 7-0 run that was capped by a Napier jumper. But UConn scored just one more time before the period’s end, and Harvard got back within two on a Webster three and Curry free throw before the break.

The Crimson struggled inside defensively and offensively throughout the night, getting outrebounded 35-28 and outscored 30-18 in the paint. Wright—the reigning Ivy League Player of the Year—in particular had a tough time against projected NBA top-five pick Drummond, shooting just 3-10 from the field.

“They bothered [Wright],” Amaker said. “It wasn’t anything intricate or tricky; they’re tremendous upfront at being shot-deflectors and intimidators.”

But on the whole, the coach believed his team showed a lot of improvement from a year ago, when it lost 81-52 to the Huskies in Hartford.

“I was very pleased with the effort we brought,” Amaker said. “I thought we came here with the idea of winning and we played with that spirit. … [But] we have a long way to go.”

-Staff writer Scott A. Sherman can be reached at ssherman13@college.harvard.edu