No. 24 Harvard Men's Basketball To Receive Toughest Test Against No. 9 UConn 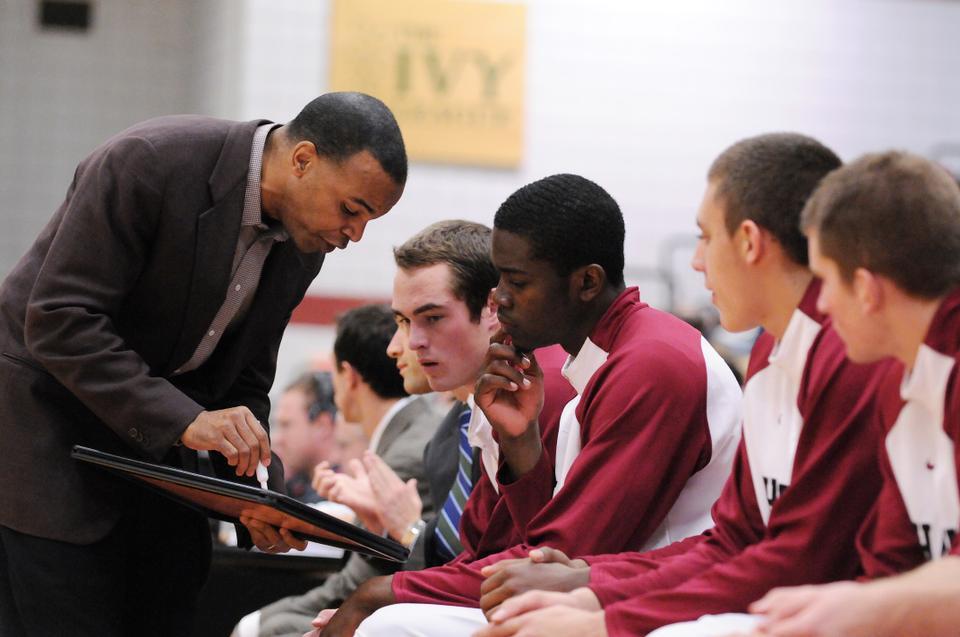 Harvard men's basketball coach Tommy Amaker speaks to his team during its matchup with Seattle Sunday. The No. 24/25 Crimson takes on No. 9 Connecticut on the road Thursday at 7 p.m.
By Alexander Koenig, Crimson Staff Writer

A little less than a year ago, the Harvard men's basketball team traveled to Hartford, Conn., to face a University of Connecticut team that was riding a nine-game winning streak that included three victories at the Maui Invitational. The Crimson fell to the eventual national champion Huskies, 81-52, behind 20 points from the No. 9 pick in the 2011 NBA Draft, Kemba Walker.

Thursday evening, No. 24/25 Harvard (8-0) returns to Connecticut to face No. 9 UConn (7-1) and boasts a similar resumé to that of the Huskies a year ago. The Crimson is riding an eight-game winning streak, one punctuated by its triumph at the Battle 4 Atlantis, a Bahamas tournament in which UConn came in third.

Harvard did not face the Huskies at Atlantis, instead meeting in the finals the University of Central Florida–which had upset UConn in the semis.

"We know that they're good," Crimson coach Tommy Amaker said. "And we know that they beat us by maybe 150 points last year, and so we're excited to play and get another shot at them."

All hyperbole aside, last year’s matchup was quite the shellacking, as Harvard was outrebounded, 39-27, by a Huskies team that not only looked bigger and more athletic, but also much more confident.

But that may have changed, as the Crimson enter Thursday's showdown brimming with confidence from its championship in the Bahamas.

“We did [beat a big and athletic team] against Florida State, so hopefully we can use some of things that we tried there," Amaker said. "The difference is we're not going to sneak up on anyone this time around."

Despite being the underdogs (according to Vegas the Huskies are 6.5-point favorites) it is Harvard, not UConn, which carries the momentum into this early season matchup. Riding the wave from the Battle 4 Atlantis, the Crimson took care of business against Vermont and Seattle last week, securing a top-25 ranking for the first time in program history, and becoming media and campus darlings in the process.

"There's been a lot of positive good will for our players," Amaker said. “So many folks on campus, classmates, employees, everyone, are really proud of them, and have let them know that. I'm just pleased to see our guys so happy.”

The buzz surrounding this team will only continue to grow if Harvard can come away with a victory Thursday, but doing so will be no easy task.

“They’re a really good team,” co-captain guard Oliver McNally said. “They have a bunch of future NBA guys, and so it’s going to be really tough.”

The Huskies may have lost Walker, but the squad still boasts a potent lineup led by freshman big Andre Drummond and sophomore shooting guard Jeremy Lamb. According to NBAdraft.net,the two project as the No. 1 and No. 2 picks, respectively, should they declare for the upcoming draft.

“They’re not a one-man team, and they haven’t been for years,” Amaker said. “[UConn] coach [Jim] Calhoun has built a juggernaut, and they’re going to be as good, or better, than anyone we will face all year. We’re just going to show up and compete, and try to have some fun along the way.”

The Crimson has its fair share of talent but will be hard-pressed to individually match up with the stars on the Huskies’ roster. And so it will take a team effort to come away with what would be the program’s first win over a top-10 opponent in history. Luckily for Amaker and his staff, Harvard has displayed an incredible amount of depth and unselfishness early in this season, boasting a rotation that goes 10-deep.

Key in providing this depth has been a very involved freshman class. The cornerstones of the Crimson remain the frontcourt duo of reigning Ivy League Player of the Year co-captain Keith Wright and junior Kyle Casey, and backcourt maestro Brandyn Curry, but the contributions of the freshman class may prove essential in coming away with a victory Thursday.

Freshman guards Corbin Miller and Wesley Saunders have provided a scoring spark off the bench while rookie forwards Steve Moundou-Missi and Jonah Travis have been two of the top rebounders on the team while also bringing a tenacity and toughness to the defense that has helped the Crimson keep four of its last five opponents to under 50 points.

"We're going to do our best to have a solid team rebounding performance against their big and athletic guys," Amaker said. "It's also going to be very hard to guard their trio of guys on the perimeter. It's a very, very difficult task. They're one of the greatest programs in all of college basketball, so we're thrilled to be able to compete against them."