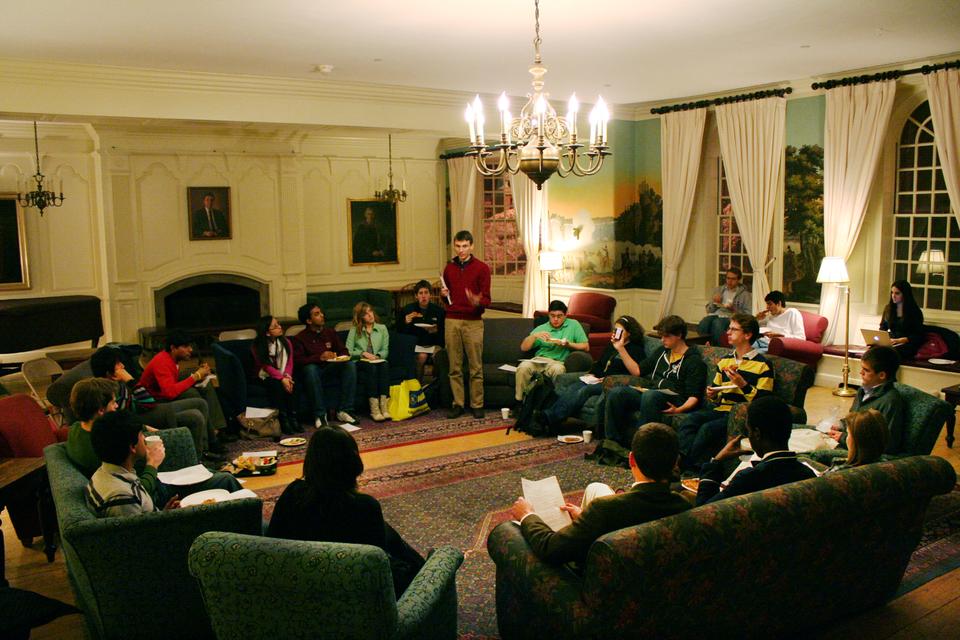 The Harvard Political Union discusses the ROTC's role in the Harvard community in Lowell House Junior Common Room Thursday night. Students talk about the implications of DADT's repeal on Harvard's official recognition of ROTC and what role ROTC and military recruitment should play on Harvard's campus.
By Nadia L. Farjood, Crimson Staff Writer

The debate over whether the Reserve Officers’ Training Corps program should return to Harvard continued last night with a student debate sponsored by the Harvard Political Union. Arguments over whether the program ought to be recognized by the University continued to center around the Pentagon’s policy toward transgender and intersex-identified individuals.

The conversation—which included about 25 students—focused on Congress’ recent repeal of “Don’t Ask, Don’t Tell,” which prohibited gay, lesbian, and bi-sexual individuals from openly serving in the military, and whether that ought to bring an end to Harvard’s 40-year standoff with ROTC.

“President Drew Faust acknowledged that Harvard would be receptive to welcoming ROTC back to campus, but current barriers to Harvard’s official recognition of ROTC include a lack of student interest and a potential violation of Harvard’s non-discrimination policy,” said Sidhant Misra ’14, adding that transgender and intersex-identified individuals are currently excluded from enlisting in the military.

Representing the Harvard Republican Club, Derek J. Bekebrede ’13 sparked debate by stating that ROTC should be recognized on campus to honor students serving their country. Contention surfaced as students deliberated whether acknowledgement of a military program constitutes appreciation for public service.

The debate then shifted to whether the repeal of “Don’t Ask, Don’t Tell” has ended discrimination in the military.

Sandra Y.L. Korn ’14, a Crimson editorial editor, said that although the lifting of the ban now allows gay and lesbian individuals to openly serve in the military, inequity remains.

“As a student organization, ROTC would violate anti-discrimination policy. Transgender and intersex people are labeled with gender identity disorder and not allowed to serve at all,” Korn said. “Discrimination against a small minority is still discrimination.”

Another issue brought to the fore focused on whether ROTC should return to its historical roots or continue to provide students with the opportunity to participate in the program and enroll in courses at MIT, as the program currently functions.

“Should ROTC be reincarnated as it was in history?” Anderson said. “Harvard would not take a neutral stance but an affirmative stance and overstep its bounds if it were to accept ROTC.”

For now, debate persists about whether ROTC should return to Harvard, and the program remains unrecognized by the University.