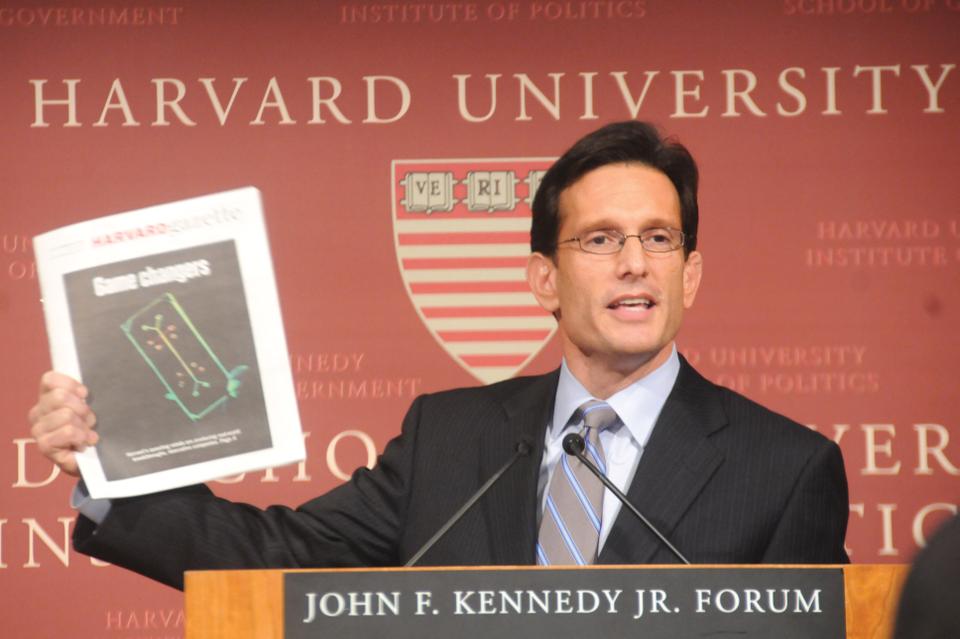 House Majority Leader Eric I. Cantor (R-Va.) spoke about recently proposed cuts to the federal budget last night, filling the John F. Kennedy Jr. Forum at the Institute of Politics and drawing hundreds of protesters to the surrounding streets.

In his remarks, Cantor said that the United States currently stands at a crossroads between a society dependent on government programs and one focused on cultivating private entrepreneurship.

“Before us is a choice that is a definitional choice about who we want to be as a country,” Cantor said. “In order to protect our way of life, the choice we must make is about changing course and renewing our commitment to reform and to focus on growing the things that make America unique.”

Cantor pointed to American innovation as pivotal to economic prosperity and said that investments in the private sector, rather than government-sponsored programs, are the way to provide financial security to the next generation of Americans.

“We are becoming a country more concerned about government-sponsored financial security than individually driven opportunity. That to me threatens the American ideal,” Cantor said.

He compared the situation in the United States—where he said that citizens have demanded “an end to the explosive growth of government”—to that in Europe, where recent protests by young people about cutbacks in retirement benefits proved that French citizens have been “conditioned” to depend on their government for their future financial security, he said.

Cantor warned that if Washington does not make balancing the budget a priority, it will cause an eroding value of the dollar, an acceleration in inflation, and ultimately a lower standard of living for all Americans.

The first question of the night showed that several of the groups protesting outside were also willing to directly confront Cantor.

A College student supporting the Harvard College Global Health and AIDS Coalition asked whether Cantor would “save a million lives” by stopping the cuts to global health programs.

Students around the room then stood in solidarity, waving banners and chanting, “Budget cuts kill. Fund global health.” The students then continued their protest by walking out of the event.

A later question on the recent proposed cuts to the AmeriCorps program—which funds programs like Teach for America and Habitat for Humanity—was followed by a round of enthusiastic applause from the audience.

Cantor responded to questions about fiscal cuts by emphasizing the need to make difficult decisions in the struggle to balance the federal budget.

“We’re going to have to make some choices,” Cantor said. “There are plenty of federal programs whose mission is laudable.”

Some questions addressed ongoing political issues besides the budget.

In response to a question about President Obama’s recent announcement that his administration will not defend the constitutionality of the Defense of Marriage Act, a federal law that defines marriage as between a man and a woman, Cantor said that he was “taken aback” because he had never seen a President decline to defend a law on the books.

Cantor said that he would stand by his record in support of traditional marriage. ­

“It is contrary to the fact that we are a nation of laws,” he said.