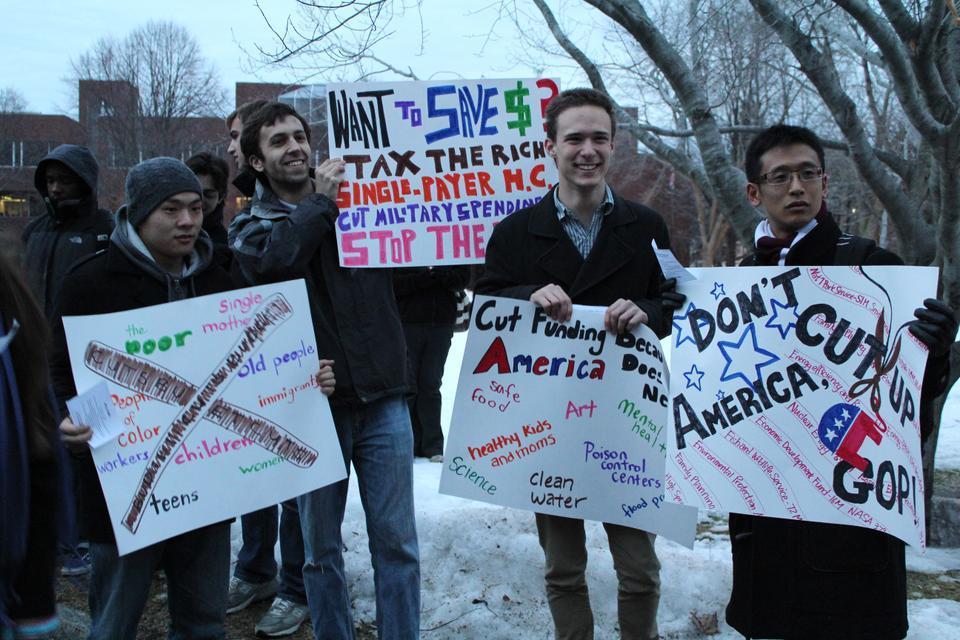 A raucous crowd of about 300 students armed with signs and drums rallied outside the Harvard Kennedy School yesterday—where House Majority Leader Eric I. Cantor (R-Va.) was speaking—in protest of proposed budget cuts that would defund service programs and some social services.

Last Saturday, Republicans passed a budget proposal that would slash $60 billion in federal spending, including funding for AmeriCorps—a service organization—and Planned Parenthood, which provides family planning services across the country.

Kurt Tsuo ’11, who organized the protest with Samuel B. Novey ’11, said that proposed budget cuts could endanger students’ ability to participate in Teach for America, a program that places recent college graduates in low-income schools and receives significant funding from AmeriCorps.

“The budget cuts are an attack on our classmates and the work that they do,” Novey said. “We want to send the respectful message that AmeriCorps members do incredible work in communities.”

Students who rallied outside yesterday’s address by Cantor, who is at the center of Congressional budget negotiations, hailed from a wide range of universities—including Harvard, Yale, Dartmouth, Columbia, Northeastern, and Wellesley. The protesters demanded the maintenance of AmeriCorps and Planned Parenthood funding and increased funding for global health programs.

The Harvard College Global Health and AIDS Coalition also organized a protest asking Cantor not to support the currently proposed continuing resolution for fiscal year 2011, which would lead to a $1.5 billion cut in global health funding.

During Cantor’s speech inside the Kennedy School, 20 members of the coalition staged a walkout to protest the cuts.

Additionally, members of the Kennedy School Progressive Caucus asked passersby and rally participants to pose for the camera while holding signs saying “this is personal.” The pictures, which are meant to show “the faces of budget cuts,” are displayed on a website—www.mrcantorthisispersonal.tumblr.com.

Annie W. Mathews, a member of the caucus and first year student at the Kennedy School, said the idea for incorporating individuals at the event into the protest came from a friend who felt the proposed budget cuts affected him personally, since he has either contributed to or studied many programs threatened by budget cuts.

In addition to the protest, Caleb E. Jonas, a second year student at the Kennedy School, started an online petition on change.org two weeks ago to ask the Senate to maintain AmeriCorps. Tsou said the petition had received 100,000 signatures as of yesterday afternoon.

Sadie Lansdale, a junior at Tufts University, said she thought it was “pretty telling” that so many student organizations were rallying together.

“These bills that are on the table are defunding [programs advocating for] the rights of the people,” she said.

Cambridge police did not report any arrests during the rally.

“The protesters have been peaceful and very cooperative,” Cambridge Police Department spokesperson Daniel M. Riviello wrote in an e-mail.