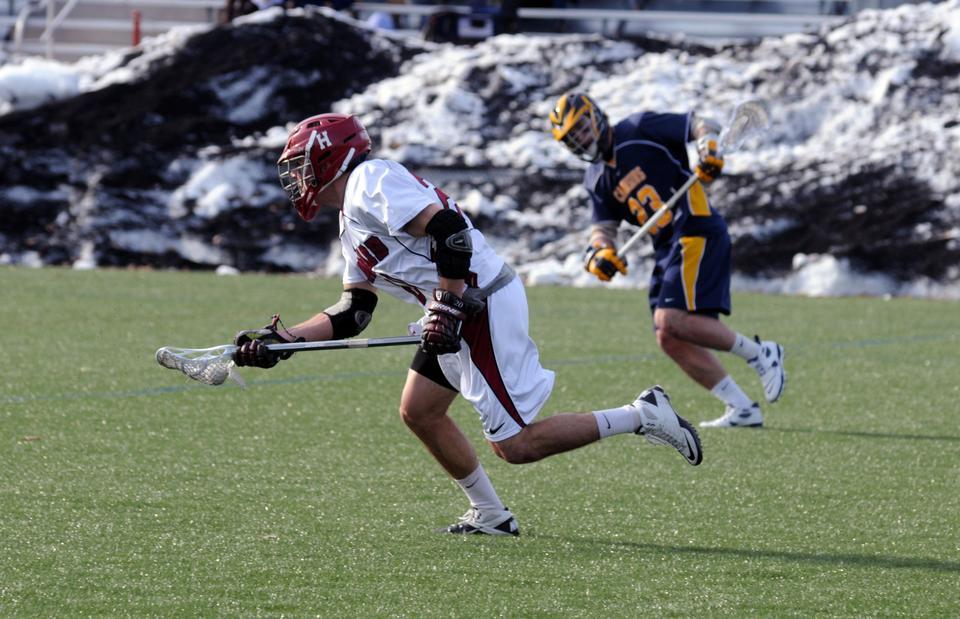 Its early lead completely evaporated, the Crimson had eight minutes left in the fourth quarter to either make a stand or drop its season opener.

Harvard chose the former, as sophomore midfielder Jack Doyle cut from the top of the field with a step on his defender, taking a perfect pass from freshman Daniel Eipp and burying a shot in the back of the cage. Doyle’s score put his team up, 8-7, with 6:12 remaining in the fourth quarter.

An unassisted goal from co-captain attack Dean Gibbons minutes later ensured that the Crimson (1-0) would hang on to win its season opener against Canisius (0-2), 9-7, Saturday afternoon at Soldiers Field Lacrosse Stadium.

“We were our best at points today,” Harvard coach Chris Wojcik ’96 said. “But we were inconsistent in a number of areas, and we have to clean that up in order for us to reach our potential and be the best that we can be.”

Harvard started off the game with a sense of urgency, scoring three unanswered goals. The run was sparked by Gibbons, who was assisted by sophomore attack Peter Schwartz in a man-up situation.

Despite leading 3-0 with 13:04 remaining in the second period, the Crimson had any hopes of a blowout dashed when Canisius rattled off three straight scores in the second quarter—the first coming off a fast break and the second coming in a man-up situation.

It would be back and forth for the remainder of the game, with Harvard pulling ahead by two goals, only to see the Griffs respond to even the score.

Canisius was able to stay in contention by controlling the tempo, disrupting the Crimson’s fast-paced offensive system.

“They were slowing it down,” Wojcik said. “We are an up-tempo team, and unfortunately, we came down a couple times, and the goalie made a save—and then we’re back on defense again tiring our defense out.”

“I think we dominated possession, especially in the first quarter,” co-captain Kevin Vaughan said. “We had the ball pretty much the entire time, and I think our shots weren’t really falling—their goalie had a great day. We outshot them almost 2-1, but we really didn’t get our shots on cage.”

In a day when the Crimson’s offense struggled to find the back of the net at times, it turned to its defense for consistency. Sophomore goalkeeper Harry Krieger had an especially noteworthy game, collecting nine saves.

“Harry Krieger played a great game,” Gibbons said. “He’s played great in all our preseason scrimmages—we expected him to have a big day. He helped us out when our offense was struggling. Every defensive person on our team played well.”

Heading into the fourth quarter with the scored knotted at 5-5, the Crimson used its mental toughness to stay calm and collected.

“I just told them, we have 15 minutes right now—how had do we want this game?” Wojcik said. “And I think the team really responded and got fired up. They really responded well down the stretch to the intensity [of the game] and gave a lot of effort.

“In those kinds of situations, you try to remain calm and confident,” Vaughan added. “There was no point in the game where I thought we were in jeopardy of losing; I was confident in our guys and the leaders of our team.”

Junior midfielder Terry White was one such leader, scoring two unassisted goals in a two-minute span that gave Harvard the emotional lift it needed.

“He’s a leader—one of our best players—and he really stepped it up,” Vaughan said.

“Terry White did a great job,” Gibbons said. “Going into the fourth quarter and shooting back-to-back goals, that really helped us get the momentum back, and we were able to take the win from there.”

Though the Griffs would respond with two goals of their own, Harvard used another goal from Doyle to retake the lead, and another unassisted goal from Gibbons all but sealed the win.

“We’re pretty psyched to come out of that close game with a win,” Vaughan said. “Especially that Coach Wojcik’s first game as the head coach of Harvard went down as a ‘W.’”