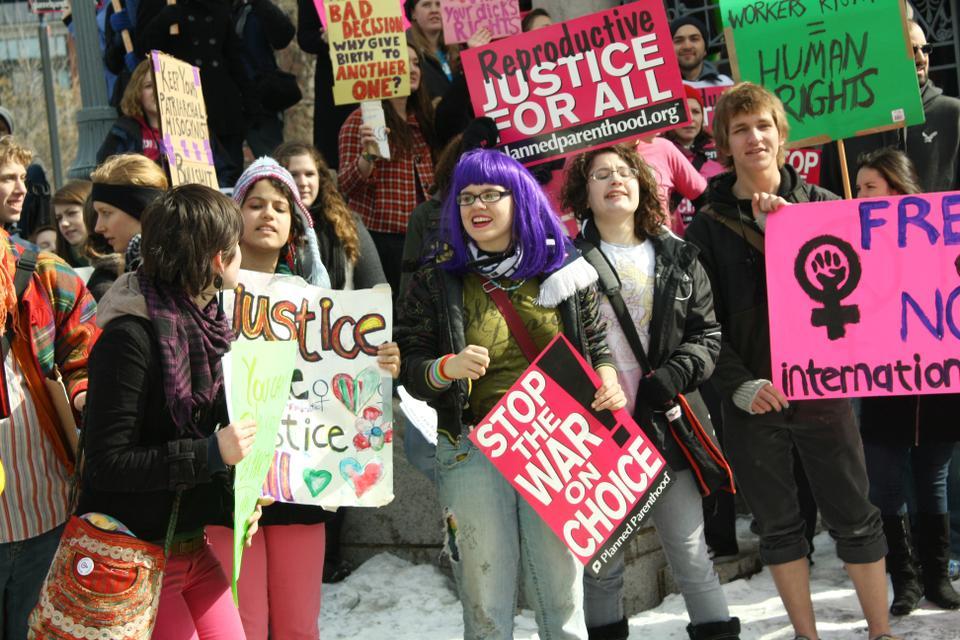 Members of the Radcliffe Union of Students, Harvard Students for Choice, and other Harvard students join area pro-choice supporters in a walk to the Massachusetts State House to rally against Congress' slash of funding for Planned Parenthood and other women's health initiatives.
By Vivian W. Leung, Crimson Staff Writer

Protesters in 55 cities worldwide gathered for International Walk for Choice day on Saturday in response to a number of bills introduced in Congress which could de-fund the $317 million-Title X federal aid program, which funds organizations such as Planned Parenthood, the nation’s largest family planning organization.

In Boston, over 1,400 protesters rallied with signs, starting from five locations and converging in Boston Common in front of the statehouse. Harvard College and graduate students, including members of the Radcliffe Union of Students, Harvard Students for Choice, and International Women’s Rights Collective, walked with fellow students and community members to protest the House bills.

“The proposed bills will infringe upon the natural human rights of half the population in this country ... The right that all human beings have to control and care for their own bodies,” said Jessica Lockwood, one of the organizers and a representative of the International Socialist Organization, in an address to the crowd.

None of the bills aimed at limiting government funding for abortion have passed the Senate, which is controlled by a Democratic majority.

“The government’s attack on [women’s right to choose abortion] is an attack on women’s rights, and women’s rights are human rights,” said Akanksha Sharma ’14, who participated in the walk. “We need to stand up against this.”

Neil Peterman, a Harvard graduate student who was at the rally, said, “I think [the Republican] strategy has been that they can’t take away abortion rights, but they can make it as hard as possible [to acquire an abortion], especially for poor women, working women, and women of color.”

To raise awareness about this issue on campus, the Harvard College Democrats are working with Students for Choice on a campaign for reproductive justice and access to reproductive health care. Yesterday, they launched a Tumblr site (harvardstandswithpp.tumblr.com) where students can send in photos attached with the statement “I Stand with Planned Parenthood” to show their support.

“These cuts are about Planned Parenthood, not about balancing the budget,” said Harvard College Democrats Campaigns Director Katie R. Zavadski ’13. “What these cuts are harming are women’s access to pap smears, and [Sexually Transmitted Infection] tests. We don’t think that women’s lives should be part of a political game.”

“We hope to get people to submit pictures of themselves—with Harvard affiliation—to show, ‘I care about this,’ and that we are all standing together—both men and women,” said Leah Reis-Dennis ’13, a board member of Students for Choice who also walked on Saturday.

The president of Right to Life, Harvard’s undergraduate pro-life group, declined to be interviewed yesterday.

Zavadski is currently comping The Crimson’s news board.

—Staff writer Vivian W. Leung can be reached at vivianleung@college.harvard.edu.