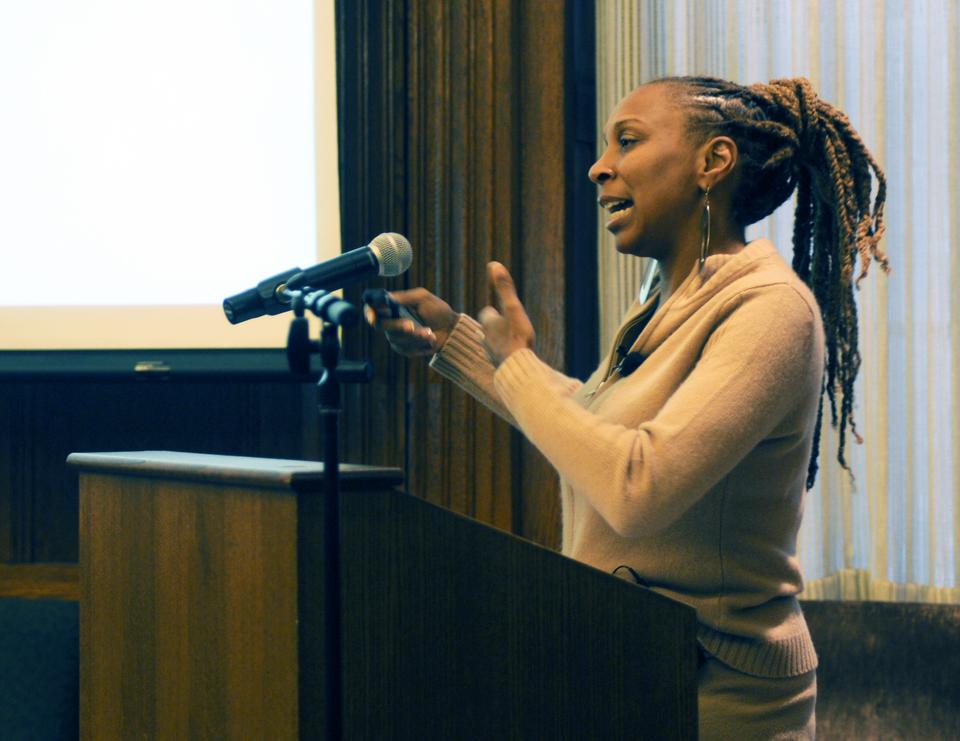 Gender, race, class, and other dimensions of identity are inherently related and intertwined, thereby contributing to systematic social injustice, said UCLA and Columbia Law School Professor Kimberlé W. Crenshaw at the second of a three-part lecture series on race.

Titled “Intersectional Interventions: Unmasking and Dismantling Racial Power,” the lecture focused on Crenshaw’s claim that oppressive forces in society, such as racism and sexism, intersect and can give rise to systems that reinforce power dynamics on the basis of discrimination.

“We should hire her to join the Harvard Law School faculty, which would directly incorporate her marvelous contribution to law directly into our curriculum,” said W.E.B. Du Bois Institute for African and African American Research Director Henry Louis “Skip” Gates, Jr.

“Her pioneering theory and remarkable work to advance social justice should be shared with the Harvard community.”

At the lecture—hosted by the W.E.B. Du Bois Institute—Crenshaw discussed the DeGraffenreid v. General Motors Assembly Division court case in which a collective of black female employees sued G.M. under the Civil Rights Act of 1964, alleging that the company’s industrial policies discriminated against black women. The court, according to Crenshaw, failed to recognize that the identity for which black women sought protection was at the intersection of the legally protected categories of race and sex, and consequently dismissed the claim.

“Crenshaw is brilliant, and she identified how intersectionality can be used and misused,” said Emily A. Owens ’09, a graduate student in the African and African American Studies Department.

Crenshaw—a leading scholar in the arenas of civil rights, black feminist legal theory, and of the junction of race, racism, and law—accredited her sensibilities to her mother, Marian Crenshaw, the “quintessential woman of the 20th century.”

Marian integrated her community’s public swimming pool at age 4 and desegregated the local theater at age 17.

“My mother’s sense of gender was also a part of her radical anti-racism,” Crenshaw said.

Her opening lecture on Tuesday explored how the law constructs dynamics of racial power and privilege.

Crenshaw’s concluding lecture of the “Racing to Postracialism” series—“Global Iterations of the Du Boisian Knot: The Problem of the 21st Century is the Problem of the Color-Blind”—will be held today.