Undergrads trudge out to classes, as schools in the University close down due to snow 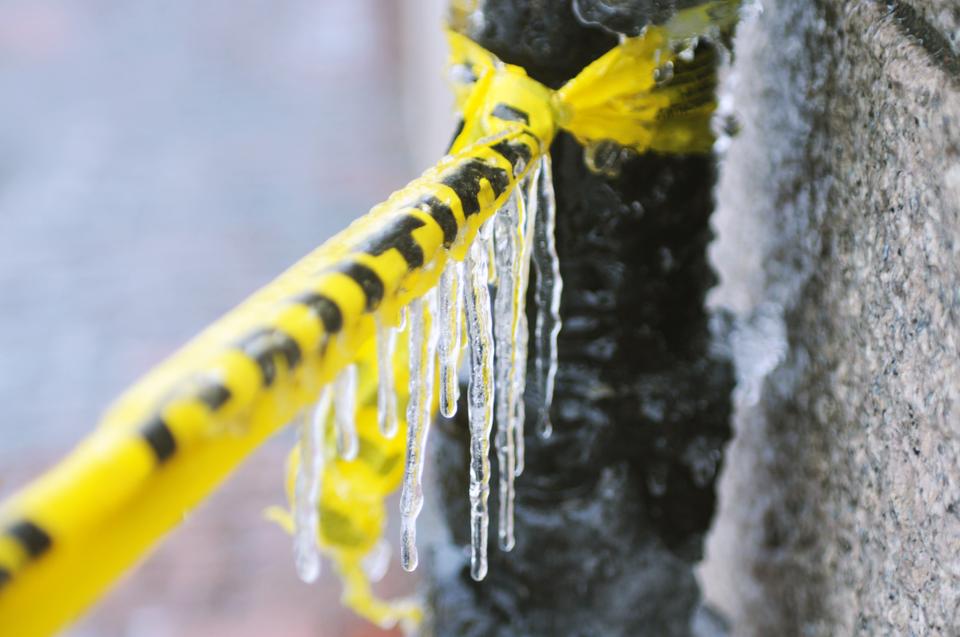 Bow Street in front of Adam’s Randolph Hall is taped off due to the danger of falling ice. Students walk around this hazard risking their shoes to the slush-filled streets.
By Gautam S. Kumar, Crimson Staff Writer

They didn’t care much about the sleet that beat down on Cambridge.

Three women jumped excitedly on the six-foot-high piles of snow outside the Science Center, opening their arms and embracing the heavy downpour.

Freshmen watched them with awe and frustration, as they clenched their jackets tight and waited to get into Annenberg Dining Hall, in a line that snaked nearly halfway to the Science Center.

A freshman, wearing jeans that were short enough to reveal her white socks and a pair of silver-blue athletic shoes blackened from the slush, dared to dart ahead of a break in the line.

“Shoot. I hate this weather,” she muttered, as she shook off her newly drenched shoes, cursing at the barely discernible puddle of slush that divided the line.

Her white socks had turned gray.

And so has Cambridge over the past week.

Nearly six feet of snow, much turned blackish-gray slush, has blanketed the city in a little over a month.

While some has melted away, the sidewalks of Cambridge are no longer hogged by huddles of friends, as three-foot-high piles of snow creep halfway onto the walkways.

Late students no longer leapfrog past their peers to hurry to class, forced to wait patiently in a single-file line up the streets.

The high snow piles notched a new record—the snowfall in the past January is the third highest amount of snow the city has ever received on record, at 38 inches.

The historic amount of snowfall shut down much of the University.

Many graduate schools were closed, and only necessary staff was required to come to work today, with Facilities Maintenance Operations staffers salting and cleaning paths.

“But not everyone has good boots,” said one staff member, who was clad in

a pair of the “better” black snow boots that came up to his ankle. He was headed home after shoveling snow from the steps of Widener Library.

Another FMO staff member silently continued to sprinkle salt on the steps, wearing the regular black shoes that he said most FMO workers receive as part of their uniform.

Below the stairs, two upperclassmen crossed from Old Yard to Harvard Yard, wearing Hunter boots and playing hopscotch around the freezing puddles that were forming black ice.

“I can’t wait to get back to Adams,” one said to her friend outside Thayer Hall, as they passed a graveyard of nine-feet-tall snowmen, who were pock-marked by pellets of sleet from the day, dehumanized now into large mounds of snow.

Just around the bend, leading to the Science Center, evergreen bushes peeked through their snow hats, a preview of the warm spring to come.