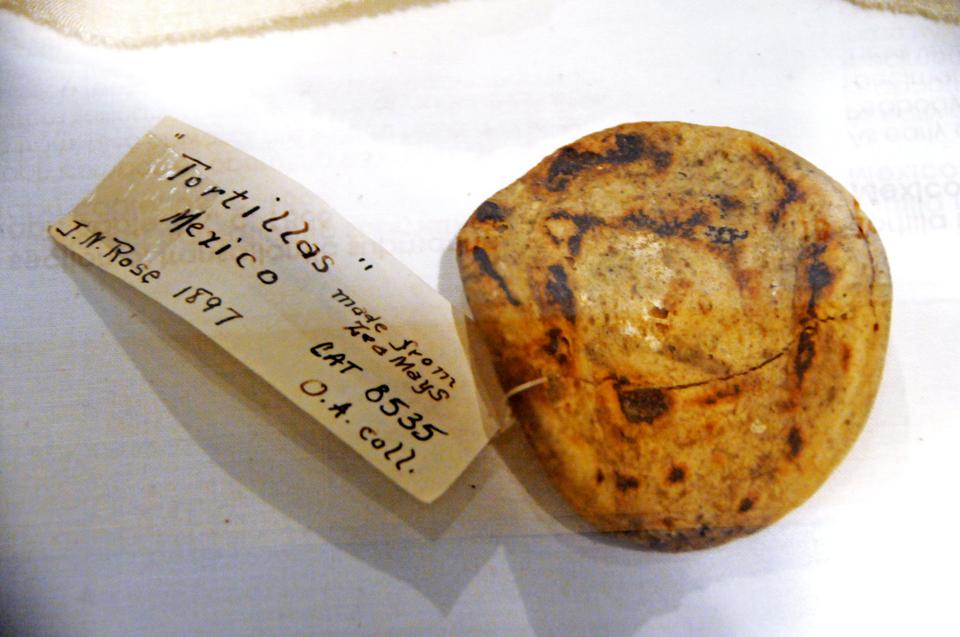 Among the many eclectic objects of “Tangible Things” is this century old tortilla, displayed in the Harvard Science Center.
By Kristie T. La, Crimson Staff Writer

A bedspread made by famed Bauhaus artist Anni Albers, who immigrated to the United States with her husband Josef Albers in 1933, is as much a part of Harvard’s history as its university art collection. Her textiles adorned the beds of students at the Graduate School of Design, where architect Walter Gropius—who had commissioned the piece—taught after his departure from Germany under Nazi pressure.

The bedspread can exemplify Bauhaus ideals or convey the translation of a European avant-garde across the Atlantic. It plays a part both in Harvard’s history and its role in the war on the artistic front—the university welcomed a renowned figure like Gropius while also purchasing modern German works shown in the infamous Degenerate Art Show. As a personal artifact of Albers, it speaks of exile under pressing circumstances. To limit the object to one story and one category of classification is to ignore how multifaceted it is.

The same could be said of the other 200 objects on display in the exhibition “Tangible Things: Harvard Collections in World History,” held in the special gallery of the Collection of Historical Scientific Instruments at the Science Center. The collection is part of U.S. in the World 30, a General Education course of the same title introduced this spring.

For the past nine years, Laurel T. Ulrich, the 300th Anniversary University Professor, and Ivan Gaskell, Margaret S. Winthrop Curator in the Harvard Art Museum and Senior Lecturer on History, taught a seminar that required original student research on objects from the Harvard collections. The seminar—a blueprint for “Tangible Things”—brought forth 83 original student projects, which supply many objects now visible in the exhibition.

“When you’re working with actual objects, it’s one thing to sit around a table where you can have the things there and students can pass the object around and really look at them and describe them,” said Gaskell, “but to do something on a large scale that could involve more students than can sit around a table—that was our ambition.”

Working with curators from different collections and the General Education office, Ulrich and Gaskell translated a successful small seminar into a lecture course of 250. The course uses objects from Harvard’s collections to trace how the university’s extensive collections have developed: they reveal that the categories that separate medical specimens, ethnographic artifacts, art pieces, or even the artificial and natural are neither obvious nor definite.

Looking closely at an object—how it was made, who produced it, who bought it, how it was used, and how it ended up at Harvard—allows its history to extend beyond the temporal context in which it was produced. “You begin thinking differently about history. History is something that is created,” said Ulrich. “It’s not just out there ready to be plucked, but something actually made through self-conscious decisions about what to keep and what not to keep.”

“Tangible Things” includes both a stand-alone exhibit in the Science Center and guest objects—things taken from their expected locations and shunted into new settings and collections throughout the campus. With some of its more unusual objects, these questions must have been harder to answer than expected: Where do you store a jar of tapeworms removed from a blue-blooded Bostonian? What do you do with bottles of chemicals from the Civil War era labeled in French and marked as belonging to the Medical College of Alabama? Where do John Singer Sargent’s palette, Mark Twain’s microscope, Louis Aggasiz’s Brazilian coffee beans, and Henry David Thoreau’s pencil belong? Students in the course are asked to visit the exhibit and complete assignments, and are encouraged to classify these objects that extend beyond rigid modern categorization.

“By questioning these old categories, we are also looking back to a time when these categories weren’t so fixed,” said Sara J. Schechner ‘79, David P. Wheatland Curator of the Collection of Historical Scientific Instruments and a co-curator of “Tangible Things.” “There were prior ways of organizing the world and our current divisions have evolved from those—but if you step back and look at things again, they blur.” She added, “these divisions aren’t natural in the sense that they come from how the universe was made. They are human constructions based on how we in our culture and those in other cultures view the world and decide to compartmentalize things.” In the case of this exhibition, this blurring is made literal. “Tangible Things”—in its range of objects from a century old tortilla to a “Girls Are Not Chicks” poster—harkens back more to a cabinet of curiosities than the modern didactic museum show. However, the unanticipated exhibit drives the viewer to question what the collection gains by sacrificing this pristine museum organization.

“When you walk into certain kinds of museums or collections, you get visual cues or clues as to how you should read or understand those things,” said Sarah A. Carter ’02, Lecturer on History and Literature. Carter is the principal coordinator of the show, and a former student of Gaskell and Ulrich’s undergraduate seminar years ago. “These clues suggest the kinds of questions that you would want to ask about that object ...When things are moved out of the places you expect them, suddenly you realize that maybe those questions aren’t adequate anymore,” she said. An aim of this exhibit is to trigger these novel, unexpected questions.

“Tangible Things”—the course and its exhibit—do not simply showcase the range of objects in Harvard’s collection. They are a testament to why we need things that run the gamut from the rare and obviously precious—paintings, silver goblets, a Galapagos tortoise shell—to the seemingly ordinary and often forgotten—a homemade dress for camp, a Hebrew pocketbook, and an advertisement for a silk trade company in China.

“If you are able to collect that range of things and think about [it] historically, materially, aesthetically, as specimens, as tools—[you] understand the past in a more nuanced way because people obviously lived surrounded by a broad range of things from fine arts to a toothbrush,” said Carter. Indeed, the display of objects in “Tangible Things” presents unique historical vignettes of the Harvard community.

“In the end this is about people, not things,” said Gaskell. “It’s about how people relate to each other through their making and uses of things and the role those things play in human relationships, whether those are relationships between individuals or social groups.” Gaskell’s sentiments strike to the core of the course and the exhibit. Now, as they did in their seminar, Gaskell and Ulrich urge new students and visitors to disregard their assumptions and just to look closely at these tangible things.