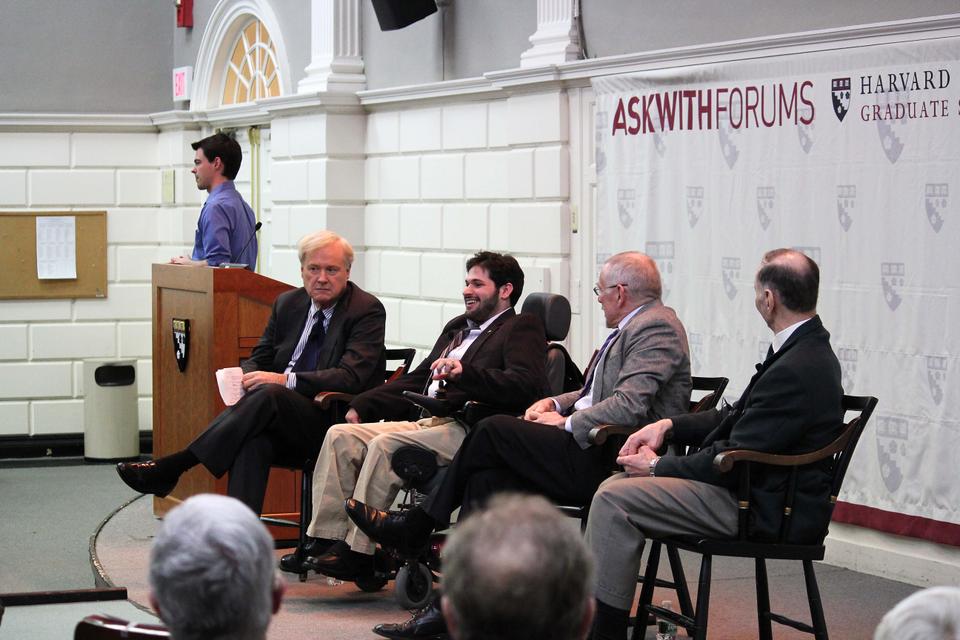 Kevin Mintz ‘12 speaks at the GSE’s Askwith Forum to commemorate the 35th anniversary of the Individuals with Disabilities Education Act. The forum was moderated by Chris Matthews, host of MSNBC’s Hardball.
By Michelle M. Hu, Crimson Staff Writer

Kevin T. Mintz ’12 has an IQ of 150, but, due to cerebral palsy, he is wheelchair-bound and speaks slowly and with apparent difficulty. For individuals with a physical disability, Mintz is an exception in an educational system that experts said yesterday consistently fails to address the needs of students with disabilities.

At a panel at the Harvard Graduate School of Education, the assembled experts said that the 1990 Individuals with Disabilities Education Act (IDEA), which expanded and regulated the services distributed to children with disabilities, has failed to provide adequate preparation for an independent lifestyle.

Thomas Hehir, an Ed School professor and former adviser to President Clinton on the 1997 reauthorization of IDEA, said that people often look at educational opportunities for students with disabilities as “charity.”

“Denying a kid with a disability equal education is a violation of civil rights,” Hehir said. “There isn’t quite the level of urgency around these issues.”

Mintz, who graduated valedictorian of his high school class and was the first student with a physical disability in Miami-Dade County to be taught alongside his peers without disabilities, said that his life was dramatically altered by the provisions of IDEA—such as early intervention at age one, and undergoing surgery in order to simply sit up in a chair.

But he also criticized the act for not teaching students with disabilities to be self-sufficient.

“Where IDEA truly fails is in assuring there will be a strategy in place after students get their diploma, and I say that from experience,” Mintz said. “The law should be designed for people with disabilities not to live dependently but interdependently.”

Mintz said that because therapists were less knowledgeable than him about algebra and biology, he had little choice but to work with his father for five years. As a result, Mintz said he had little interaction with his peers.

“Under no circumstances should that be acceptable,” Mintz said. “I was socially isolated.”

While IDEA has sought to improve the educational experiences of individuals like Mintz, it has fallen largely short of its goals, according to Hehir.

“The bill is not self-implementing. It’s great that we have it, but it depends on people doing the right thing. I think the federal governmment needs to do more,” he said. “We have so far to go.”