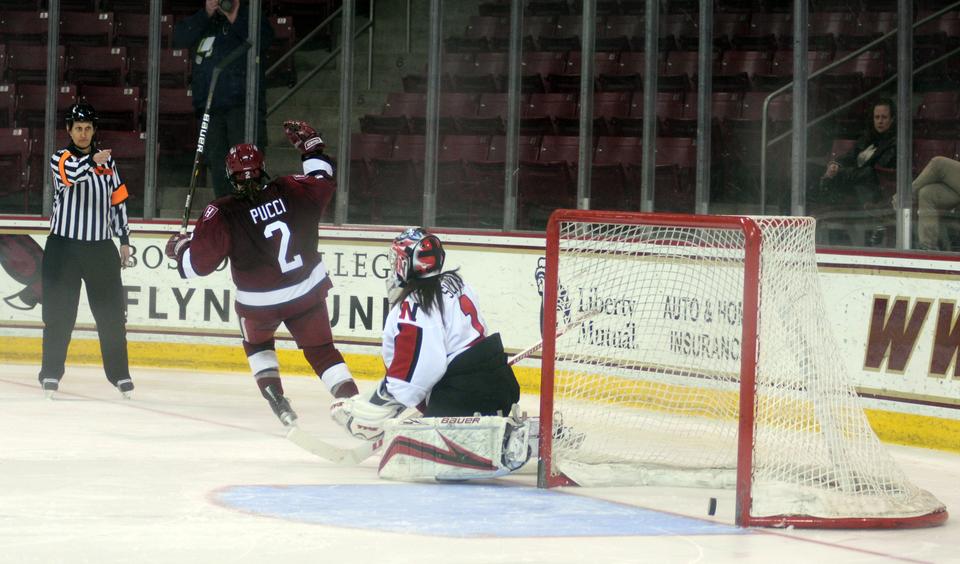 Sophomore Josephine Pucci scored the game-winning goal in sudden-death shootout to send the Crimson to the finals of the Beanpot. Harvard will face Boston College in pursuit of its third title in four years.
By Claire K. Dailey, Contributing Writer

Crimson sophomores Jillian Dempsey and Josephine Pucci each scored a goal in the sudden-death shootout, while classmate and goaltender Laura Bellamy’s tough stand in the net lifted Harvard to a 4-3 victory at Conte Forum last night.

The Crimson got off to a rocky start in the first period, as the Huskies scored first with a goal at the 9:30 mark from Rachel Llanes, who was assisted by teammates Alyssa Wohlfeiler and Maggie DiMasi. Northeastern continued its strong attack, striking again two minutes later. Casey Pickett capitalized on a breakaway to push the score to 2-0.

Harvard coach Katey Stone cited the Crimson’s failure to execute as the reason for the slow start.

“It was less about the score and more about our play, and the efficiency with the way we were trying to do things,” she said.

Aside from two penalties by the Huskies and a strong power-play effort by Dempsey and freshman Lyndsey Fry, Harvard had little to celebrate about in the first period, as Northeastern out-shot the Crimson by a 12-9 count.

Beginning the second period with strong shots on goal by tri-captain Liza Ryabkina and Fry, Harvard came out of the locker room looking aggressive and revived. But the Crimson squandered two scoring opportunities, as Pucci was tripped on a breakaway and Ryabkina failed to convert on an on-target pass from Dempsey.

Just as Harvard was showing its teeth, the Huskies’ Lori Antflick, assisted by Siena Falino and Stephanie Gavronsky, tallied her sixth goal of the season early in the period.

The goal was Northeastern’s only shot in the entire second frame.

Following the Huskies’ third goal, hope seemed to be dwindling for Harvard. But at the 12:30 mark of the second period, tri-captain Kate Buesser finally found the back of the net off an assist from freshman Gina McDonald. The Crimson ended the period with strong passing and solid defense by Pucci and freshman Marissa Gedman, and Harvard got off nine shots on goal.

“It’s tough to out-shoot a team and then not get any in the net, but I think we realized that we could run all over [the Huskies],” senior Ashley Wheeler said. “At the beginning of the third period, we weren’t getting goals. We were just getting more shots, more shots, building up. But I think that kind of just gave us more momentum.”

Wheeler capitalized on that momentum late in the period, sparking the Crimson comeback with a key goal. Dempsey found the senior breaking for the net, and Wheeler lifted the puck over Northeastern goalie Leah Sulyma’s head with 4:14 to play.

But Wheeler was not finished. Less than a minute later, the senior found Gedman, who powered a strike into the net from the blue line, forcing the Huskies to call a timeout with a little over three minutes on the clock.

“[As for] the pucks that the goalie had a hard time seeing, she either barely made a save or the pucks went in,” Stone said. “Two shots, two screens, two goals.”

Harvard ended the third period with 12 shots to Northeastern’s five.

“I think our team especially is a third-period team,” Wheeler said. “That’s a big thing about Harvard hockey—we’ll play until the last buzzer.”

The Crimson had little trouble holding the Huskies scoreless in the five-minute overtime period, but Harvard failed to convert any of its five shots into goals.

The 3-3 score held up, and the contest went to a charged best-of-three shootout.

Right out of the gate, Dempsey planted the puck in the net for the Crimson, while the following two shooters for both squads failed to capitalize on their on-goal attempts due to the stiff defense provided by Bellamy and Sulyma in goal.

Just when things looked bright for the Crimson, Northeastern captain Alyssa Wohlfeiler found the goal for the Huskies, giving each team a shootout goal.

The game went to a sudden death round of sudden-death, and put what proved to be the winning shot in the net to lift Harvard over Northeastern.

Bellamy sealed it with a stop against the last Husky shooter.

“I just jumped on the ice just like any other shot,” Pucci said of her game-winner. “You know, we’ve been in so many pressure situations, so it’s just go out there and shoot.”

Following its win in the semifinal game, Harvard will go on to play No. 7 Boston College in the Beanpot championship next Tuesday.