"The Evolution of Bruno Littlemore" by Benjamin Hale (Twelve) 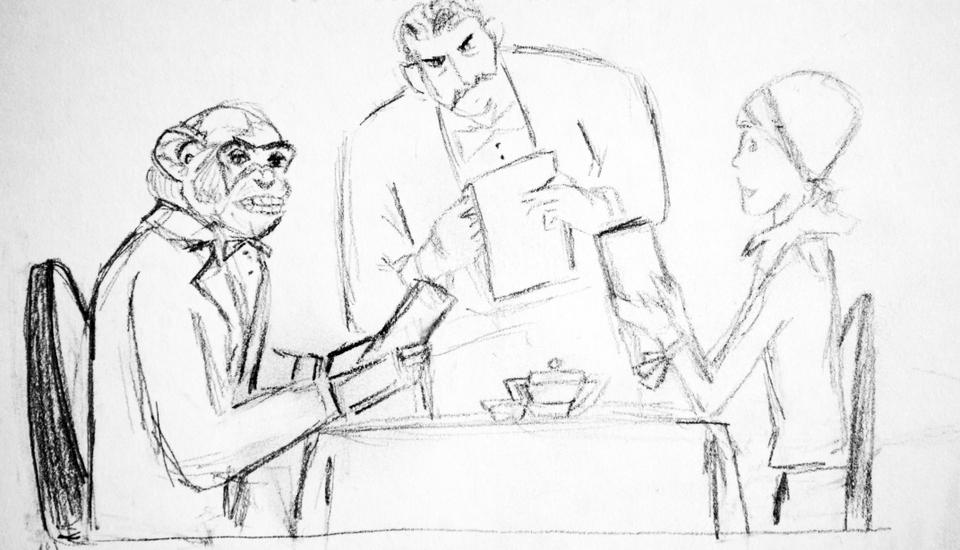 "The Evolution of Bruno Littlemore" is in stores now. By Caroline M. Trusty
By Leanna B. Ehrlich, Contributing Writer

“The least I can do,” famed primatologist Jane Goodall once said about her work with animals, “is speak out for those who cannot speak for themselves.” Benjamin Hale’s debut novel seems to have the same goal, with a twist—rather than speaking for the mute, Hale allows the mute to speak in his own words. Written as a sprawling memoir, the novel chronicles 25 years in the life of Bruno Littlemore, a talking chimpanzee—educated, artistic and a convicted murderer. He narrates his story from confinement, yet Hale’s intensely descriptive and ostentatious prose gives Bruno the only right he ever sought: humanity.

Researchers single out Bruno, born in the Lincoln Park Zoo in Chicago, Ill., for his uniquely human personality. He arrives at the University of Chicago to undergo years of exhibition and learning, all part of a series of experiments to test the limits of chimpanzee intelligence. He immediately falls in love with the young Dr. Lydia Littlemore, a unorthodox primatologist who questions conventional scientific methods and soon brings Bruno home with her. Raised by Lydia as an emotional replacement for her own stillborn son and dead husband, the two develop a deeply emotional, and eventually sexual, relationship.

When sudden tragedy forces Bruno to live independently, he continues to explore the human condition from the unique perspective of an outsider. Bruno’s descriptions range from shockingly crude to heartbreakingly honest. His raw memoir, as Hale imagines it, explores the overlooked but central aspects of humanity that people take for granted—and one infinitely curious ape cannot.

Hale’s descriptions of ape life brim with metaphors for the human condition. As Bruno recalls about his mother, “She was born in the ghetto, a zoo-child of zoo-parents.”  In contrast, his Zaire-born father knew the freedom of the wild before his forceful introduction to captivity. His father even uses violence as an outlet for the post-traumatic stress disorder he developed after witnessing his parents’ murder in Zaire.

Hale throws out obscure topics and descriptions that, in the context of another novel, would be pretentious and unnecessary. But presented from the point of view of a self-educated, reflective chimpanzee, allusions to the Westermarck effect and ruminations on the existential nature of consciousness force the reader to accept Bruno’s humanity.

As Bruno’s emotions and mental faculties grow more human-like with the years, his outside appearance comes to mirror his inner ‘evolution.’ He eventually loses all his hair and undergoes rhinoplasty to obtain a human nose. Even before his nose job, Bruno’s hairless appearance and loquaciousness fool a 14-year-old girl into believing that he is a midget with birth defects. Here, Hale is even able to include a scathing critique of modern suburbia and selfish parenting. When Bruno meets this young, privileged and angry child actor, he cannot help but compare her life to his. “Little Emily had been sold into entertainment,” Bruno reflects, “just as I had been sold into science.”

Hale’s incisive prose reaches its zenith in Bruno’s exploration of the world around him. In unpacking society’s notions of religion, the taboos of death and defecation, and the intricacies of language, the plot of the novel often plays second fiddle to the language. Bruno’s constant digressions—recollections of other events, or meditations on human nature—lend his character a distinctive voice that overpowers any possible confusion about plot or chronology.

Through Bruno’s consistent wonder at the gigantic, fascinating human world, Hale brilliantly unpacks the intricacies of life. The skill of reading, which Bruno only learns after years of cultural immersion and education, never fails to amaze him. Shocked by the “metaphysical acrobatics” that all literate humans perform daily, Bruno’s detailed descriptions of his own thought process enliven the act of reading, critically examining it in a way that novels usually do not.

Hale brilliantly deconstructs the way the brain perceives the printed word: symbols, images and sounds all fascinate Bruno. He defends this obsession, saying, “We do not demand that human memoirists first explain how they became capable of language before getting down to the business of telling their stories,” Yet, every aspect of Bruno’s entirely unique life demands explanation.

Hale never shies away from offensive language and concepts, from comically crude anecdotes to scathing criticism of religion. In his thorough description of Bruno’s life, he leaves out no aspect of ‘human’ existence. Bodily functions play an important role in Bruno’s memoir—his maturity at the time of his introduction to human society means that he remembers, with perfect clarity, exactly how he was bathroom-trained, and describes the process in graphic detail.  Bruno’s condescension toward religion, animal experimentation and organized science ensure that a broad swath of society is attacked by Hale’s prose. There is also the overriding issue of Bruno’s relationship with Lydia, which can be interpreted as bestiality, true love, or both.

Yet for all of its shock value, “The Evolution of Bruno Littlemore” also reflects beautifully on the meaning of existence and humanity. Bruno explores the terrible tragedy of the human condition, in which language, though it enlightens, also separates people from their animal natures. “We gain language and lose the amazement,” he explains, “and afterward yearn to have it back, while at the same time we are always using our words as sticks to beat back the terror that crouches always just behind us, in our past, in our bodies, in our delicate animal selves.”

Over the course of the novel, language, the last barrier between humans and the rest of the animal world, comes tumbling down. Pondering the relationship between humans and animals, Bruno concludes that, “if we think of the whole world as a prison, then there’s no such thing as a cage-free animal.” In his intelligent, poignant debut, Hale demonstrates that despite the artificial separations that people erect between themselves and the natural world, humans and animals share more than we think.