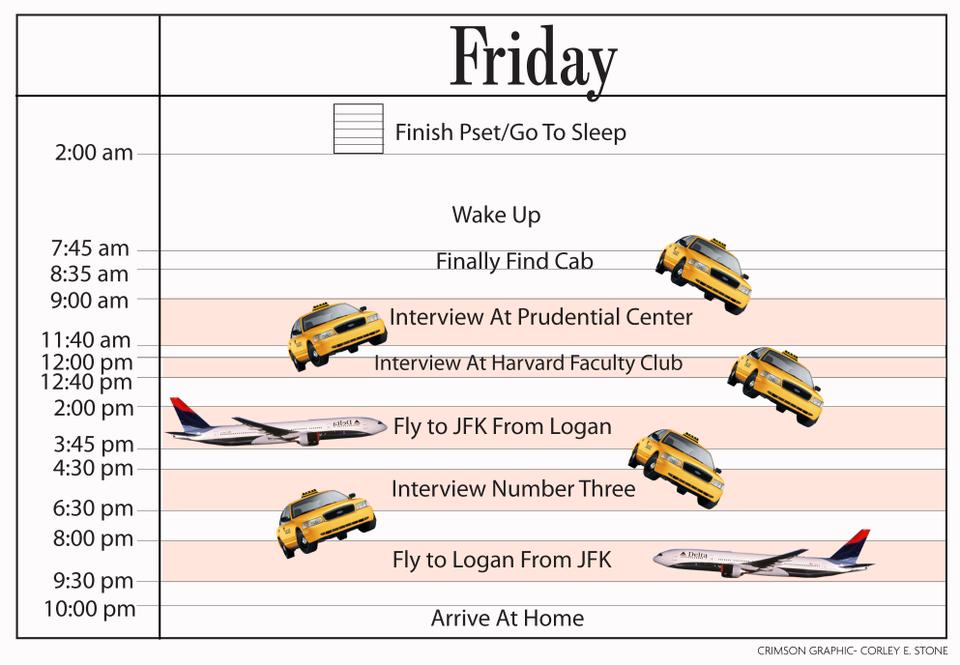 It’s a Friday. After pulling an all-nighter to finish his math problem set, Sanjay P. Misra ’12 leaves Adams House at 8:15 a.m. for his 9 a.m. consulting interview at the Prudential Center. It takes him 20 minutes to find a cab, which brings him to his interview three minutes before it starts.

At 11:40 a.m. Misra sprints out, jumps into a cab, and barely arrives in time for his 12 p.m. interview at the Harvard Faculty Club.

Forty minutes later he is again in a cab, this time on his way to Logan Airport to catch a 2 p.m. flight to New York.

The plane lands at 3:45 p.m., giving Misra just about enough time to get to his third interview at 4:30 p.m. When Misra finishes the last interview, he rushes out to grab the fifth cab of the day, so that he could catch a flight back to Boston at 8 p.m.

“I hadn’t eaten all day, and I hadn’t slept, it was just very stressful,” Misra says, shaking his head. “When I got back [to Cambridge], I had a cab driver drop me in front of Felipe’s. I almost passed out there.”

Misra’s recruiting schedule may seem excessive even for the average overworked Harvard student. Yet for the about 33 percent of the class of 2012 that was involved in on campus recruiting this past month, full days of interviews and day-trips to cities of potential employers are simply the norm. Recruiting can put a strain not only on students’ academics, but also on their social life and mental health.

FALLING BEHIND IN ACADEMICS

One of the biggest challenges for students who are doing recruiting is coordinating schoolwork and interviews. Even though students may try to avoid schedule conflicts, many say missing a few classes often is still inevitable.

“If you get the opportunity to interview, you want to take it because you are risk-averse. You don’t know what position you are going to get, so you want to interview as much as you can,” Benjamin L. Enowitz ’12 says, adding that he has missed numerous classes during recruiting season.

Adam J. Arthurs ’12 initially planned to submit applications at 64 companies—but ended up applying for 20 to 30—and simply did not go to class during the first two weeks of recruiting.

“Academics is the hardest part, because you are basically not a student at Harvard.” says Misra. In order to catch up, Misra spent a significant amount of time studying on his own and attended office hours for help.

According to Misra, although most of his teaching fellows and professors are understanding and supportive, not all of them are equally flexible with their classes and schedules.

For Misra’s class “Japanese History 145: Lady Samurai in Medieval Japan,” the professor held a make-up session for all students who missed class during that week. But another of Misra’s courses permits only one absence in section, after which students must write a five-page paper for each additional absence.

One common solution to minimize damage to academics is to pick classes strategically, students say. Some choose courses that have easier content, more flexible schedules, and are conducted in lecture format as opposed to sections or seminars—but this solution significantly limits students’ course options.

The ways in which juniors must limit their courses to accommodate recruiting is unfortunate, says Jennifer A. Xia ’12, recounting the story of a friend who ended up taking three classes at the end of recruiting season, one of which was pass-fail.

“It’s not that they don’t want to take four classes that are interesting; it was just that they weren’t able to because they missed so much material.” Xia says.

Not everyone chooses to let recruiting trump academics, however. For Timothy J. O’Hara ’12, who applied to 30 firms and had roughly 20 interviews in total, class remains the most important obligation. Even though he knew that he would have to miss class, O’Hara said he still planned his courses as if he weren’t doing recruiting.

“You are at college to take class. It is your number one priority. It’s the reason that you are getting these jobs,” he says. “You have to remember we are at Harvard University and the idea is to get a degree.”

In addition to conflicts with schoolwork, students in the midst of the recruiting must also cope with temporary isolation and stiff competition.

“It’s just hard to tell your friends that I’m not going to see you for a week or two. I wasn’t running with my teammates. I wasn’t eating with my block mates for two weeks. I was just by myself for two weeks just doing interview stuff,” Enowitz says.

Misra, however, found that the recruiting process fortified some of his friendships.

“I’m hanging out with my friends less in the social environment, but I see them more than ever before—in the interview building.” Misra says. “I get to see these people who are really awesome kids hanging out in the most stressful environment.”

But others say having many friends doing recruiting is not always as enjoyable as it is for Misra. When friends turn into competitors, interactions can become awkward.

“There is so much competitiveness among the students about getting these spots, so whenever you are talking about it with other students you are always kind of uneasy,” says O’Hara, who is in fact a friend of Misra’s.

He interviewed at the same company in the Prudential Center on that crazy Friday morning.

“To be straightforward is the best thing,” O’Hara adds. “Everyone knows what you are there for, so it just makes it easier to deal with.”

Xia says students are very delicate about discussing the recruiting process in general.

“You don’t talk about what interviews you had, what you are considering, what offer you have, or decisions that you are making, unless people ask you specifically.” Xia said.

“Everyone is kind of curious about what everyone else is doing, but then they don’t want to come right out and say it. It’s a weird tiptoeing kind of thing that everyone plays with each other.”

COULD IT BE MORE PLEASANT?

Although many students acknowledge that the on-campus interview program has made recruiting more accessible, they still hope the process could be less stressful.

The Office of Career Services requires that employers give students at least 72 hours of notice for second-round interviews outside Cambridge, but there is no restriction on scheduling interviews locally.

“It was really not convenient academically. Stuff like this is not fair to the students because we are really doing our best to kind of juggle our schedules around,” Misra says.

In addition, students are sometimes given too little time to decide whether to accept an offer, some say. That is in spite of the OCS policy granting students until either March 4 or three weeks after the date of offer—whichever comes later—to decide.

Misra, for example, says he was once given only two days to make a decision on an offer.

Deborah A. Carroll, director of the on-campus interview program at OCS, acknowledges the existence of the problem and urges students to speak to the office about it.

“Our message is that we need to know in order to help anyone through it, and we won’t call an employer without a student’s permission unless we heard from many students.” Carroll says.

Carroll suggests that in such situations, one thing students can do is “play a little dumb”.

“To say, you know, ‘Thank you so much for the opportunity, and I’m so excited about it. But I just have a question—I was under the impression that I was going to have March 4th to make a decision?’”

“That very initial, very benign statement can often set in place everything that would rectify the situation.” Carroll adds.

To better coordinate academics and recruiting, students also suggested moving the process into January, during the College’s winter break. According to Carroll, OCS has considered this option, but it is difficult to make a quick adjustment given that the new schedule has only been in effect for two years.

As for students’ concern with social life and the environment of competition, Carroll says OCS has been contemplating a workshop which would allow students to come together and feel more sense of community. Carroll stresses that students are not in as direct a competition as they think they are.

“The hiring process is much more about fit than about number. It’s much more comparable to dating—both parties need to like each other and they both need to feel the chemistry.” Carroll says.

Despite its drawbacks, many students still relish the experience.

—Staff writer Heng Shao can be reached at shao@college.harvard.edu.