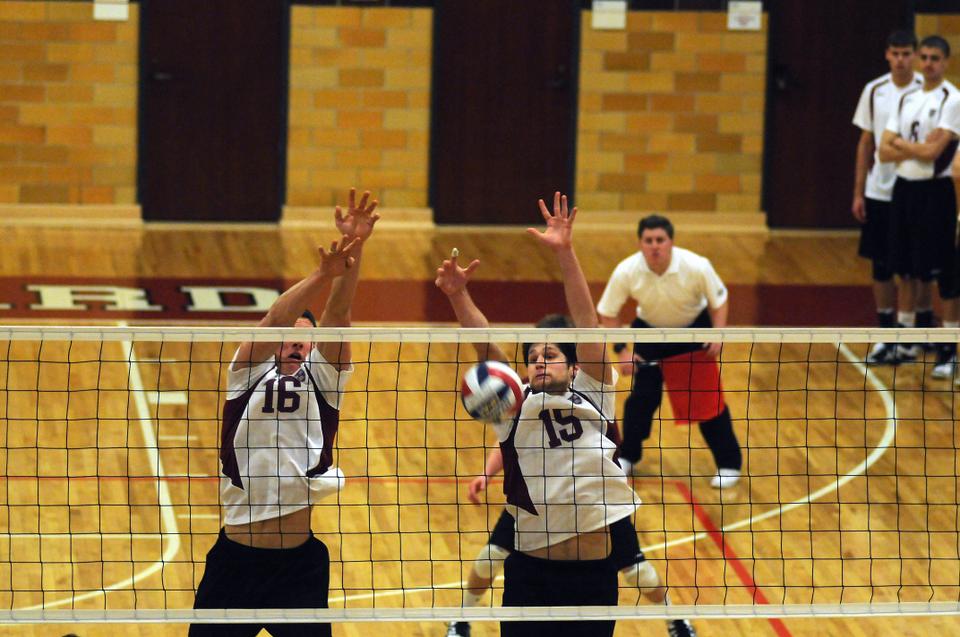 Freshman Nick Madden, left, and Chris Gibbons, right, are two of Harvard’s four rookie starters. The Crimson’s freshman class has helped the team post an 8-5 record so far this season. Next up for Harvard is Cal State Northridge, whom the Crimson will play on Saturday.
By Kenny A. Lee, Contributing Writer

Cheering for the team. Keeping the bench warm. Learning the college game.

These are the roles played by freshmen on most college sports teams, but not for the five rookies on the Harvard men’s volleyball team.

All five athletes have found a way to gain playing time and make a significant impact early on in their college careers.

Last year, the team finished 5-16 overall and 3-5 in the EIVA Hay division, but the 2011 team has already eclipsed last year’s win total thanks in large part to the performances of its freshmen: middle blockers Will Chambers, Nick Madden, and Kyle Rehkemper and outside hitters Chris Gibbons and Michael Owen.

“We’ve never been this young on the court,” Crimson coach Brian Baise says. “That always presents some challenges, but it also presents opportunities.”

Four of the team’s rookies, Madden, Rehkemper, Gibbons, and Owen, have earned spots in the starting lineup for this team on the rise. Chambers started in some of the team’s early games.

“On the court, they’ve added a great deal of size and athleticism. They are an extremely competitive bunch, and they play with a lot of poise,” Baise says. “Off the court, they fit right in with the team.”

Owen, Madden, and Rehkemper are Harvard’s tallest players. Each stand an imposing 6’5”.

Their size and athleticism have helped the Crimson rank second in blocks in the EIVA Hay division. Madden and Rehkemper rank in the top ten individually.

Gibbons, Rehkemper, Owen, and Madden also rank second through fifth, respectively, on the team in kills-per-set. Junior co-captain Matt Jones paces the squad in that category with 3.80.

“They’ve been a great freshman class and had a great attitude from day one,” Jones says. “Their work ethic is great, and they’ve come in and played strong.”

Adjusting to the college game has not proven too difficult for the group as they have gotten used to the tougher competition and the added time dedicated to the sport.

Having the whole fall season to train and getting to know each other for a whole semester helped the team develop a strong sense of camaraderie and team-spirit even with five new faces.

“The upperclassmen have been really good about making sure there’s a good transition for the freshmen,” Gibbons says. “They are definitely a great group of guys.”

But despite the time commitment, the rookies are able to find time outside of practice and games to have fun as a group.

The freshmen often grab meals together and have movie nights where they watch the Bourne series. The time on and off the court has solidified the friendship of the class, and four of them are blocking together and will be discovering their houses today.

“We see each other a lot in the gym playing volleyball, but we hang out a lot outside of class, too.” Gibbons says. “We definitely formed a bond.”

That bond has helped Harvard connect on the court too.

“Everyone wants to compete at the highest level possible,” Gibbons says. “Every time we step on the court at the MAC, it’s business time.”

Looking toward the future, the Crimson can foresee a strong men’s volleyball program for the next four years with this talented group of freshman.

Watching the players develop in the coming seasons will be intriguing as Harvard continues to build its men’s volleyball program.

“I have had high expectations for these guys, and they’ve met all of them,” Baise says. “There is a lot of optimism around the program, and the next four years will be fun seeing them grow and improve.”