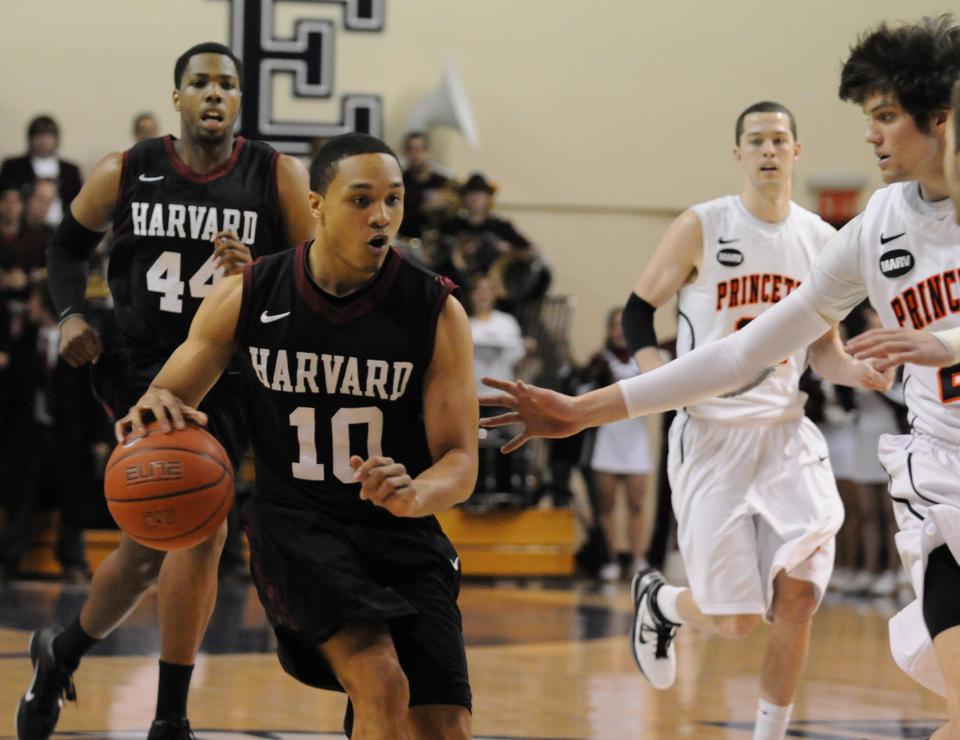 Sophomore guard Brandyn Curry hit a runner in the lane on Harvard's last possession of the game, but Princeton came away with a 63-62 win in the Ivy playoff on a buzzer-beating jumper by junior Doug Davis.
By Martin Kessler, Crimson Staff Writer

NEW HAVEN, Conn.—In last night’s 63-62 loss to Princeton, one of the Harvard men’s basketball team’s greatest strengths this season proved to be one of its biggest problems.

The Crimson, which had entered the contest as the nation’s second-best free throw shooting team—connecting on 81.6 percent of its attempts—struggled from the charity stripe.

Harvard finished the contest 10-of-16 from the line for a mark of 62.5 percent—its lowest single-game percentage on the season.

While junior co-captain Oliver McNally finished a perfect 3-of-3 from the line, each of Harvard’s other five players who went to the stripe missed at least one attempt.

The Crimson also struggled getting to the line, attempting just six free throws in the first half. And when the team did get to the stripe, it failed to capitalize on its opportunities.

With Harvard leading by five, 25-20, with 4:48 to play, Harvard freshman Laurent Rivard was tripped up cutting to the basket, and Princeton’s Dan Mavraides was whistled for the foul. The play sent Rivard—who entered the contest shooting 90.7 percent from the stripe—to the line for his first attempt of the night.

But the rookie bricked the front end of the one-and-one. Princeton secured the rebound, pushed the ball up court, and the Tigers’ Brendan Connolly finished an and-one layup for a five-point swing.

With the score knotted at 57 with less than three minutes to play, Curry sliced into the lane and was fouled by Princeton’s Douglas Davis as he attempted a layup. Curry made just one of his two shots, and the Tigers regained the lead on the ensuing possession thanks to a pair of free throws from Davis, whose team finished 14-of-15 from the free throw line.

“It’s amazing; we’ve been one of the better foul shooting teams in the country all year, and that was an area that certainly didn’t help us this afternoon,“ Harvard coach Tommy Amaker said.

In addition to its shooting woes from the free throw line, the Crimson also struggled with another fundamental—rebounding.

The Tigers out-rebounded the Crimson on the night, 36-24, and managed to pull down 14 offensive rebounds.

“I thought we didn’t shoot foul shots very well, and then we didn’t block out very well,” Amaker said. “I thought those were two areas that really hurt us. Again you give [Princeton] the credit for its execution in those two areas.”

Tigers’ senior forward Kareem Maddox led the way on the glass for Princeton, grabbing a game-high 13 boards—nine of which came in the second half.

Perhaps the biggest rebound of the afternoon came late in the second half with the score tied at 51.

With 4:45 to play, Mavraides attempted a deep jumper. While his shot was off its mark, Hummer was there to pull down the board. Harvard sophomore Kyle Casey fouled Hummer going for the rebound, picking up his fourth personal foul, forcing him to the bench for the next two minutes. The foul also sent Hummer to the line, where the forward sank two attempts to put the Tigers ahead, 53-51.

While the Crimson missed its opportunity to secure an automatic berth to the NCAA tournament, some Harvard fans are still clinging to a glimmer of hope that the Crimson will sneak its way into the field with an at-large bid.

Harvard will learn whether it receives an invitation to the Big Dance this afternoon when the field of 68 teams is announced on CBS at 6 p.m.

If the Crimson were to receive an at-large bid, it would mark the first time the Ivy League received two invitations.

But in all likelihood, the Harvard will have to settle for a bid to the National Invitational Tournament, a 32-team tournament that kicks off this Tuesday.

While the Crimson is not guaranteed a spot in the NIT field by virtue of its share of the Ivy League championship, Harvard is likely to receive an invitation given its 23 overall victories which include wins over NCAA-tournament hopefuls Boston College and Colorado.

“Like Coach said, we still have more left of this season,” McNally said.

The NIT field will be announced at 9 p.m. on ESPNU.