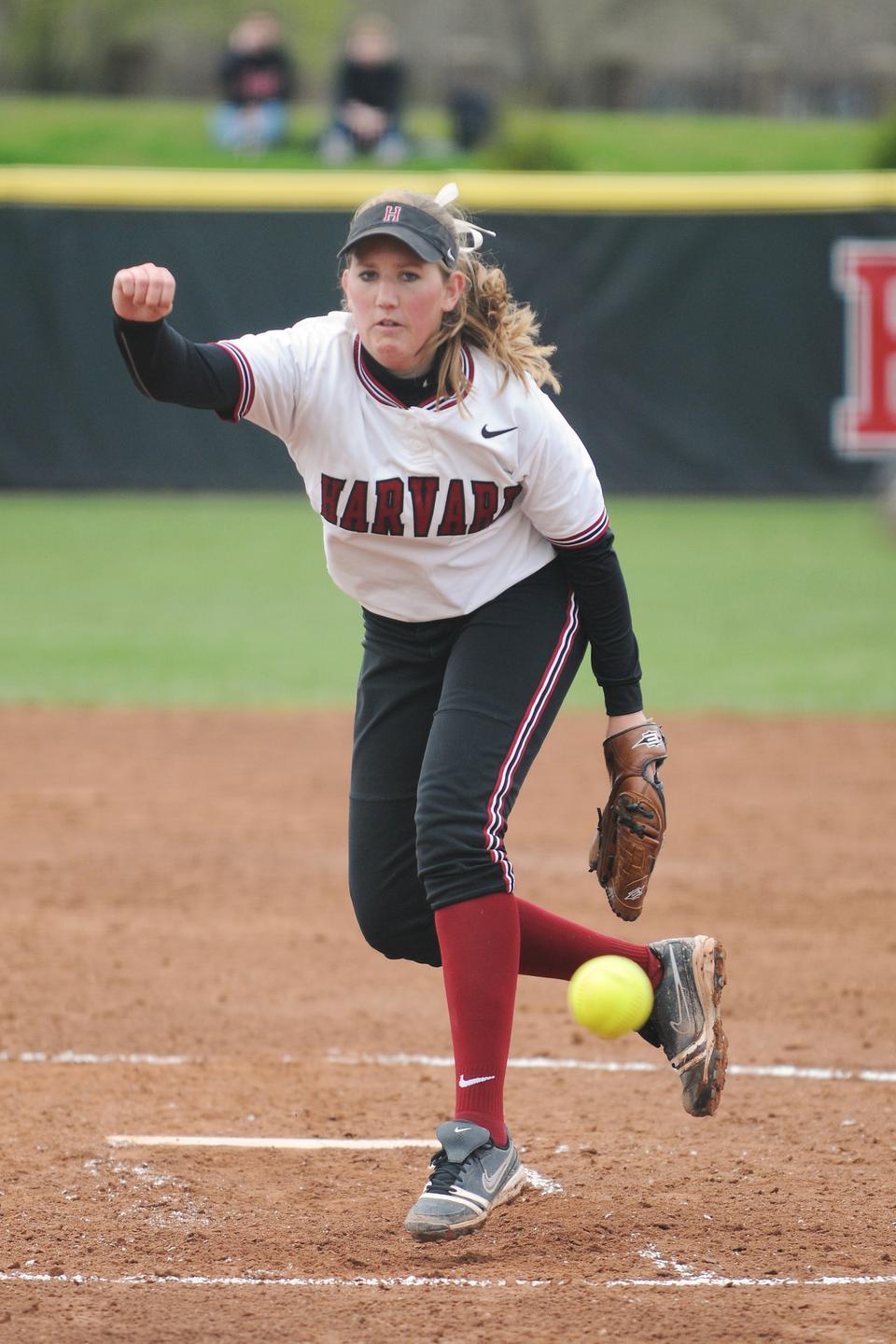 Junior pitcher Rachel Brown went 3-0 on the weekend and is 6-0 on the young campaign. Thanks to Brown's efforts, the Crimson only dropped one out of four games in the first leg of the team's West Coast trip.
By E. Benjamin Samuels, Crimson Staff Writer

At the UC Riverside tournament that started on Friday to kick off the team’s spring break California road trip, junior Brown clinched all three of Harvard’s victories.

More impressively, Brown has earned the decision in every Crimson (6-3) win so far this year.

Harvard took its first three games against UC Riverside (6-15), North Dakota (4-13), and St. Louis, before falling to the Billikens (14-9) in a rematch in the last game of the tournament.

Brown went 3-0 on the weekend, striking out 29 during two starts and two relief appearances. She walked seven and surrendered only four earned runs.

“I think she was really composed. She had a great rhythm in her routine. She mixed her pitches well, and focused pitch-to-pitch,” Harvard coach Jenny Allard said.

The Crimson fell into an early hole, and the team was never able to catch up to St. Louis in the second game between the two in as many days.

Junior Julia Moore struggled on the mound and picked up her second loss of the year to move to 0-2. Brown came in after an inning and a third, and despite another strong performance, Harvard couldn’t close the one-run deficit.

“Julia Moore got the start today, and she was really settled in and throwing good pitches,” Allard said. “They just had her timed.”

After surrendering a run in the first, co-captain Ellen Macadam tied the game with a lead-off home run. But Moore was charged with three runs in the top of the second—two of which came around to score after the junior was pulled—and the Billikens were able to hang on.

The Crimson scored twice in the bottom of the same inning but did not plate a runner during the rest of the afternoon, leaving nine stranded on base. A St. Louis insurance run in the top of the seventh all but sealed a Billiken win.

“I think we obviously had a disappointing last game,” Brown said. “I think it’s kind of tough to mentally practice those game situations, so it takes a little bit of time to warm up. I have confidence that we’re going to get there.”

Macadam went 3-for-4 and Brown fanned 11 as Harvard easily coasted past the Fighting Sioux in the third game of the tournament.

The Crimson scored twice in the top of the first—on a sacrifice fly from junior Whitney Shaw and a RBI-groundout from freshman Kasey Lange—to jump to the early lead. Brown was perfect through four and two-thirds, keeping the game out of reach.

“I think we have quite a few players who are in a really good spot right now,” Brown said. “I think overall, our team is really great offensively this year.”

Lange and Shaw each picked up another RBI later in the game, and other than a brief fifth-inning two-out rally, North Dakota mustered little offense on the afternoon.

After St. Louis scored the tying run in the seventh to even the game at one, sophomore Ashley Heritage hit a walk-off single in the eighth to give Harvard the extra-inning victory.

Brown worked an inning in relief to pick up the win, but freshman Laura Ricciardone threw seven strong innings. She was denied the complete-game shutout with two outs in the bottom of the seventh.

“Laura Ricciardone had a great game on Saturday,” Allard said. “She pitched stellar. She held them until the end of the game, when they strung some hits together…I think that was the best we’ve seen her pitch in the two weekends.”

Kelcie Matesa pitched a complete game for the Billikens but picked up the loss.

Despite Brown’s shakiest performance of the weekend—the pitcher six walks and two earned runs in six innings—the Crimson gave her more than enough offensive support to win the tournament’s first game on Friday.

Harvard scored three runs in the first and took a 7-0 lead going into the bottom of the sixth. UC Riverside managed two runs in each of the last two innings, but the Crimson still easily held onto the win.

Junior Mary Zumbro went 1-for-3 with two RBIs, and Heritage hit 3-for-4 and scored twice.

“We were coming out strong early in the games,” Allard said. “We were being very aggressive and getting key hits and trying to score runs in the first couple of innings.”