Harvard Dropped in First Round of NIT 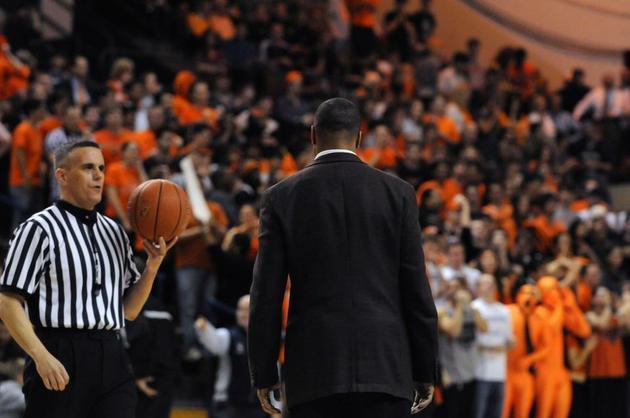 Harvard coach Tommy Amaker's squad lost in the postseason to a more athletic school for the second year in a row, falling to Oklahoma State Tuesday in the first round of the NIT.
By Martin Kessler, Crimson Staff Writer

Suffering from a poor shooting performance and facing a more physical opponent, Harvard bowed out in the first round of the NIT Tuesday night, falling, 71-54, to Oklahoma State in front of a Gallagher-Iba Arena crowd of 5,342.

“Certainly not one of our better performances,” Crimson coach Tommy Amaker said. “We’ve been a much better basketball team this season, and [it's] disappointing, given the kind of year we’ve had, to have this kind of send off to our final game.”

The sixth-seeded Crimson (23-7, 12-2 Ivy) was overpowered by the Cowboys’ frontcourt duo of Marshall Moses and Matt Pilgrim, who combined for 30 points and 12 rebounds. Moses led all scorers, finishing with 18 points on 7-of-10 shooting.

“They’re tough around the post area,“ said Amaker, whose squad was outrebounded, 31 to 23. “Pilgrim and Moses, those kids are strong...We always try to establish an inside presence for our team and then play out from there. We were never able to do that, I think, because of those two kids in particular.”

The Crimson was also hindered by a sub-par shooting night, finishing 22-of-55 from the field, a mark of 40 percent. Harvard also managed to get to the line just seven times on the evening—a season low.

But it was Cowboy guard Reger Dowell who sparked the hosts (20-13, 6-10 Big XII) in the game’s opening minutes. Dowell, who finished with 15 points on 6-of-7 shooting, got into the lane with ease, scoring six of the Cowboys’ first 20 points and assisting on another basket.

Less than six minutes into the contest, the Crimson found itself in a nine-point hole after Keiton Page cut to the basket and sank a floater from the left baseline.

The Crimson cut its deficit to four off a two-handed slam by Casey—the visitors' leading scorer with 13 points—but a three from Page and a floater from Dowell put the Cowboys back up by nine.

Oklahoma State’s lead grew from there, reaching as many as 16 before the conclusion of the first half.

Trailing by 14 coming out of the break, the Crimson surrendered a pair of layups to Pilgrim and Moses on Oklahoma State’s first two possessions but soon managed to secure some stops.

And after opening the contest shooting 42.7 percent from the field, Harvard finally managed to sink some shots, igniting a 12-2 run that cut the Cowboys’ lead to eight.

Following a missed shot from Pilgrim in the post, the Crimson pushed the ball up the floor and found sophomore Christian Webster open on the left wing. Webster knocked down the open shot for his lone three-pointer on the night.

After coming up with another stop on the defensive end, Harvard pushed the pace again, this time finding Casey streaking down the lane for an easy two-handed slam.

Moses answered with a basket in the post, but junior co-captain Oliver McNally followed with a long ball to cut Oklahoma State’s lead to 12, 47-35.

One minute later, Casey cut the deficit to 10, coming up with a steal near midcourt and finishing with a slam. After Pilgrim was whistled for traveling, junior co-captain Keith Wright brought the Crimson within single digits, finishing with his left hand under the basket.

“We just took it one possession at a time,” sophomore Brandyn Curry said. “We said we had to knock down our open shots, and during that spurt we did.”

But eight was as close as the Crimson would get.

On the Cowboys’ next possession, Markel Brown stuck a deep jumper. On his squad’s next trip up the floor, Brown attacked from the left wing, driving up the middle and throwing down a ferocious one-handed flush to give Oklahoma State the lead and the momentum.

“I thought that dunk was just a big momentum play,” Amaker said. “I think it certainly zapped our momentum and sort of transferred it back to their team and the crowd energized. That basket, in particular, was a dagger for us.”

The Crimson was unable to recover from there, falling behind by as many as 19 and eventually losing by 17.

The loss puts an end to the most successful season in Harvard basketball history in which the Crimson captured a share of the first Ivy League title in program history.

But the 2010-11 finale, coupled with Saturday’s devastating Ivy playoff defeat, left a bad taste in the mouths of Harvard's players as they make their way back from the Midwest.

“It’s a very tough way to end the season,” Curry said. “The loss to Princeton and then this. We were definitely disappointed with the way we ended.”