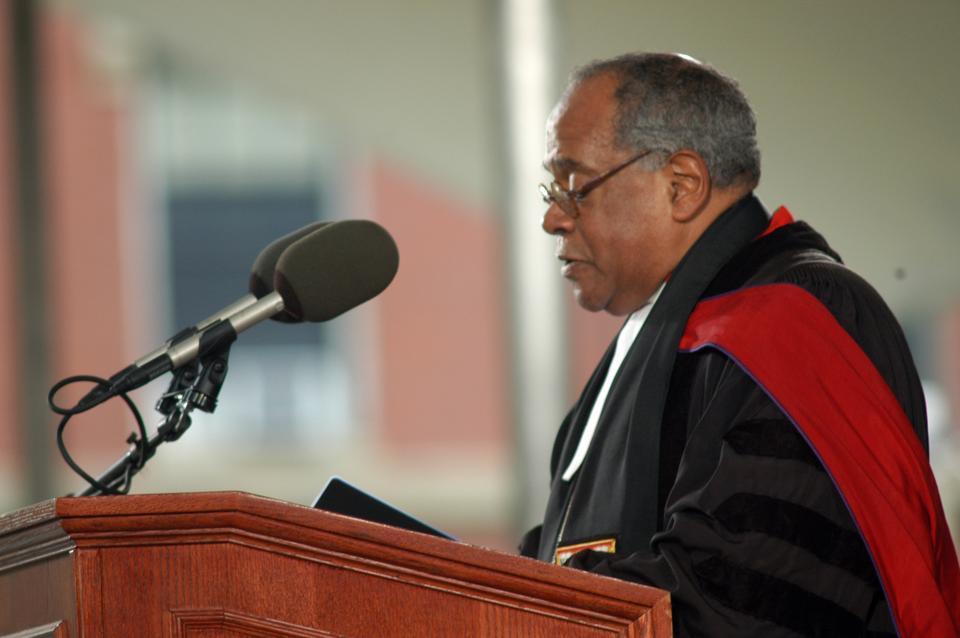 With the death of Reverend Peter J. Gomes on Monday, Harvard has lost one of its most celebrated figures—a man loved for his oratory, his staunch advocacy for equality, and his three and a half decade-long ministry of Memorial Church.

Gomes died Monday evening after a brain aneurysm and heart attack. He was 68.

For many in the Harvard community, Gomes—who was the Plummer Professor of Christian Morals at the Harvard Divinity School—was at the center of the University. As a minister, an adviser, and a friend to those who knocked on his door, he leaves a deep mark on Harvard’s history.

“No one epitomizes all that is good about Harvard more than Peter J. Gomes,” said professor Henry Louis “Skip” Gates Jr. in a statement.

Gomes was a long-time advocate of political equality and emerged as a leading figure of the gay rights movement on campus. Gomes’ coming out as gay was hailed as a turning point at Harvard, and Gomes gained national recognition as a prominent Christian figure who was also a gay activist.

In recent years, Gomes became one of the most beloved figures at the University where he presided over countless Commencement and Convocation ceremonies. He was one of few individuals on campus who it was impossible to miss—whether preaching in his characteristically booming voice or welcoming freshmen to campus in an avuncular, friendly tone. And dressed in elegant tweed, tortoiseshell glasses, and a dark wood cane, he could do nothing but stand out to the students who saw him wander through the Yard.

“Peter Gomes was an original,” Harvard President Drew G. Faust said in a statement. “Through his wisdom and appreciation of the richness of the human spirit Reverend Gomes has left an indelible mark on the institution he served with unmatched devotion and creativity.”

“I am a Christian who happens as well to be gay”—with those words, spoken before a crowd of protesters gathered in front of Widener Library, Gomes came out to the Harvard community. The year was 1991 and the crowd, gathered to rally against homophobic remarks published in a magazine, erupted in applause.

The announcement was a seminal moment for the gay rights movement at Harvard and quickly made Gomes one of its leaders.

“He was a scholar, a preacher, a teacher, and a public intellectual who brought religion into politics in ways that illumined our thought. At important moments, he stood up for things that mattered—for freedom, for liberty, and for equality,” said Memorial Church Associate Minister and longtime friend Dorothy A. Austin.

“As he stood there and watched various people come out in front of the crowd, I remember him saying, ‘This is the time to speak up,’” Austin said. “That led the way very powerfully in the movement.”

After the announcement, Gomes remained a powerful voice on issues of gay rights.

“The way to the future is always paved by extending, not restricting, liberties,” he wrote in the Boston Globe in 2004. “To extend the civil right of marriage to homosexuals will ... permit a whole class of persons both to benefit from a valuable yet vulnerable institution.”

“It was a very powerful moment,” Austin said.

According to Harvard Divinity School Professor Emeritus Harvey G. Cox Jr., Gomes never felt alienated at Harvard after revealing his orientation, as calls for his resignation were widely ignored.

According to Cox, Gomes once told him that when he “came out as gay there were fewer raised eyebrows and comments than when people found out I was a Republican.”

Gomes was a long-time Republican in a University known for its liberal faculty and delivered prayers at the inaugurations of Presidents Ronald Reagan and George H.W. Bush.

But in recent years, Gomes’ political views began to shift to the left.

In 2006, he registered as a Democrat in order support of the gubernatorial candidacy of Deval L. Patrick ’78. Gomes delivered a prayer at Patrick’s inauguration.

“Peter Gomes was a unique individual and beloved friend,” Patrick said in a statement sent to The Crimson. “He taught so many that faith is not just what you say you believe, but how you live. His loss is profound for so many, including [my wife] and me.”

But Gomes will perhaps be best remembered for his sermons in Memorial Church, where he would address the audience in a booming, sonorous voice and deploy a style that seemed largely pulled from another era, harkening back to the great tradition of Baptist oratory.

With that voice—and a profound message of religious toleration—he tended to fill the pews.

“While attendance at some college churches has dwindled, it has not at all at Memorial Church,” Cox said. “Part of the reason for this is the eloquence of Peter’s preaching and his welcoming attitude.”

During his time as Harvard’s spiritual lodestar, Gomes became a leading voice for pluralistic religious ethics and was well known for saying that one could interpret the Bible in a variety of ways, noting that Biblical passages had been used to support both slavery and liberation.

“The Bible alone is the most dangerous thing I can think of,” he once said in an interview with The Los Angeles Times.

“You need an ongoing context and a community of interpretation to keep the Bible current and to keep yourself honest. Forget the thought that the Bible is an absolute pronouncement.”

“I think he is the greatest of the clergy men that Harvard has had,” longtime friend and Divinity School Professor Emeritus Preston N. Williams said.

On Wednesday afternoons, Gomes opened his home to the Harvard community for tea, an event that became an institution of its own where faculty, staff, and students mingled in his elegant Victorian abode.

As the professor for Religion 1513: “The History of Harvard and Its Presidents,” University traditions and history were of primary concern to Gomes, Cox said. Last year, when Cox wanted to exercise the right—attached to his endowed chair—to graze a cow on Harvard’s property, Gomes was crucial in making the event happen.

When Cox said that he was worried that security guards might intervene, Gomes quipped, “They would never dare,” according to Cox.

Gomes was born on May 22, 1942 and raised in Plymouth, Mass. As a child, Gomes was a voracious reader whose parents had always stressed the importance of education, according to Linda H. Bunza, a long-time friend who first met Gomes while studying with him at Bates College,

“When he was a little boy, he would go to the basement and stand on cranberry crates and pretend to preach to the crowd,” she said. “He was a born preacher.”

Gomes attended local public schools in Plymouth. He was elected president of his class as a senior and oversaw the research and genealogy department at the local library, Bunza said.

“I think he looks to that place as where he gained his confidence,” she said of Gomes’ coming of age in Plymouth. “They saw the great gift that young man had and they nurtured it.”

Gomes’ love of his native town continued throughout his life. He served as the chairman of the committee to celebrate its 400th anniversary.

“As an African American growing up in Plymouth he was of course a minority,” Cox said. “It’s rather indicative of how Peter was able to absorb, in his own way, traditions that were not biologically his own and make them his own. His whole life he was so steeped in the history of his hometown.”

After graduating from high school in Plymouth, Gomes attended Bates College in Maine, where he majored in history.

“He was a man about campus and everyone knew him,” Bunza said. “He didn’t act at all different than anyone else, but he was probably more regal.”

After graduating from Bates in 1965, Gomes enrolled at Harvard Divinity School. He was ordained in 1968.

Gomes then moved Alabama to teach history at Tuskegee Institute—where he remained until he returned to Harvard as an assistant minister in Memorial Church in 1970.

Four years later, he was appointed Plummer Professor of Christian Morals and Pusey Minister in the Memorial Church, positions he held until his death.

Memorial Church will be open tomorrow for the community to honor Gomes beginning at 9 a.m. The University is planning a formal memorial service for this Spring.