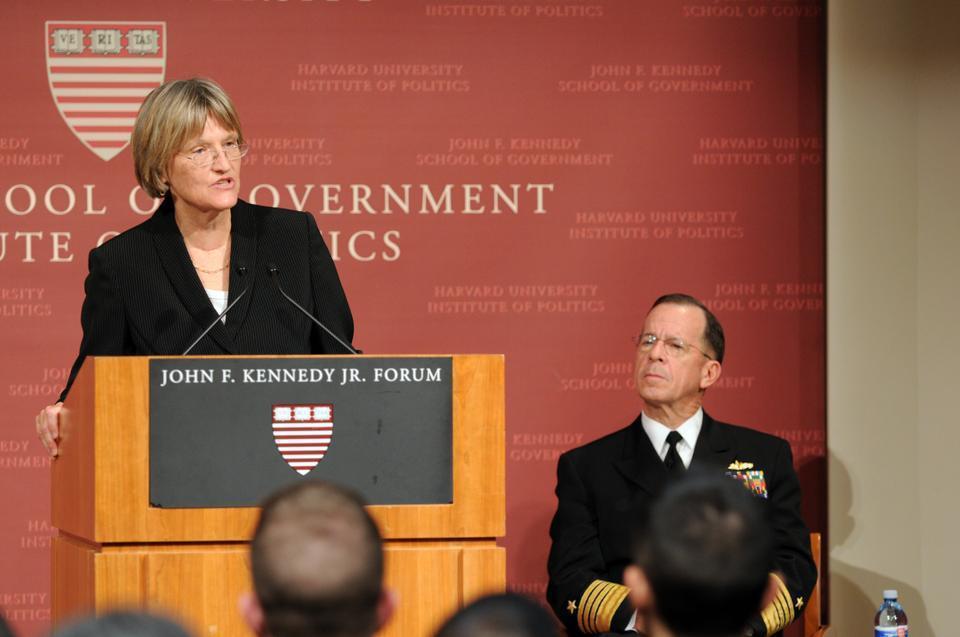 University President Drew G. Faust will sign an agreement Friday with the Pentagon that will recognize Naval ROTC. The move fulfills a promise she made at a speech (above) with Chairman of the Joint Chiefs of Staff Admiral Mike Mullen in attendance. In her address she said that she would welcome back ROTC to Harvard with the repeal of "Don't Ask, Don't Tell."
By Tara W. Merrigan and Zoe A. Y. Weinberg, Crimson Staff Writers

The Reserve Officers’ Training Corps will be formally recognized by Harvard Friday after an almost 40-year hiatus, the University announced Thursday. University President Drew G. Faust and Navy Secretary Ray E. Mabus are set to sign an agreement Friday that will recognize Naval ROTC on campus.

“Our renewed relationship affirms the vital role that the members of our Armed Forces play in serving the nation and securing our freedoms, while also affirming inclusion and opportunity as powerful American ideals,” Faust said in a statement. “It broadens the pathways for students to participate in an honorable and admirable calling and in so doing advances our commitment to both learning and service.”

Although ROTC will be officially recognized, a unit will not necessarily be established on campus, and Harvard cadets will continue to train at the Massachusetts Institute of Technology.

Previously, University officials said that they would not recognize the program until “Don’t Ask, Don’t Tell”—the military policy which banned gays and lesbians from openly serving the military—was lifted. Since Congress repealed the ban in December, Faust and other officials have been in discussions with the Pentagon about bringing the program back to campus.

According to the agreement’s terms, a director of Naval ROTC will be appointed at Harvard, and the University will provide some funding for the program.

The University is also pursuing talks with the other services about resuming official relations, according to a press release.

“We are going to get aggressive about reaching out to the other services,” said Kevin “Kit” Parker, chair of the newly created ROTC implementation committee. Parker is an associate Professor at the School of Engineering and Applied Sciences.

Military budget concerns are the biggest barrier preventing the return of other services. Army ROTC programming around the country may contract in the future, said Parker, who served as an Army major for three tours in Afghanistan.

While this may make it difficult for the Army to establish a presence on campus, Parker said he believes “Harvard should reach out and make the Army an offer they can’t refuse.”

In 1969, Harvard expelled ROTC amidst a wave of student and faculty anger over the Vietnam War. Later, the University justified its continued split with the military on the basis of “Don’t Ask, Don’t Tell,” which Harvard considered in violation of its non-discrimination policy.

In recent years, relations with the military have warmed significantly. Since 2008, Faust has attended the spring ROTC commissioning ceremony, continuing a precedent set by her predecessor, Lawrence H. Summers. During a campus event with Joint Chiefs of Staff Chairman Michael G. Mullen in November, Faust made clear that ROTC would be welcomed back when the military changed its policy on gays and lesbians.

But until Thursday, that recognition had not been made official.

For the last several decades, cadets have had to overcome a number of obstacles in order to participate in ROTC. The recognition of the program will result in increased access and benefits for current cadets at Harvard, including use of facilities, according to Parker.

“Students have had to struggle against adversity to serve the nation and also get a degree from Harvard, and I am so proud of them,” Parker said.

Previously, a group of alumni had provided financial support for Harvard cadets. Now, Harvard will step in and provide funds for the program.

The University will also provide transportation to MIT for cadets, who will continue to take military science classes there. In addition, Harvard facilities can now be used for physical training and drills.

Phillip A. Acevedo ’13 said that even though training at MIT has posed a number of challenges, “the cadets in ROTC make it work.”

“They don’t really complain that they have to go to MIT. They have their heads on right,” he added.

Most importantly, recognition of ROTC is a powerful symbolic gesture toward the military and could open the door to the establishment of an ROTC unit on campus.

“The symbolism of Harvard recognizing ROTC is huge, and so is cooperation between the nation’s finest university and the military,” Acevedo said. “We need bright leaders in the military. It is how we win and how we maintain our safety and that of our allies.”

Still, a unit will likely not be established on campus unless student interest in participating increases. As of now, just 20 students at the College are enrolled in ROTC.

“I think the big question is: As the relationship between Harvard and the military becomes closer, will more students see the military as a viable career path?” Higgins asked.

But many students said that recognition of ROTC may increase the program’s exposure on campus, potentially leading to more interest.

Victoria L. Migdal ’12, an Army cadet, said that she hopes the recognition will increase awareness of the program.

“I don’t know if it will have that much of an impact initially,” Acevedo said. “Hopefully interest will increase and eventually we will have our own unit,”

The issue of lack of interest is a “chicken and egg” problem, according to Anne D. Neal ’77, president of the American Council of Trustees and Alumni, a group that has sent a letters to the Harvard Corporation pushing for recognition of ROTC.

Higgins said he believes there should be “some sort of marketing campaign” to increase awareness of the program on campus and that current cadets can play a major role in this effort.

“Recognition makes the military a viable career track,” Higgins said. “This is something that Harvard students can do apart from just banking and consulting.”

Capt. Paul E. Mawn ’63 (Ret.), chairman of Harvard Advocates for ROTC, has suggested that Harvard retool its admissions focus to target and recruit students who would be interested in the military.

But Parker said he believes that “we have to hunker down and build this program first.”

“We have to put Harvard’s assets on the table and say it is worth your while to train your cadets here,” he added.

Parker said he believes that with recognition, the admissions office will have more traction in communities where the military is highly valued. “It is time to scoop that talent,” he said.

Higgins said he believes that Harvard already has strong ties to the military that make it an appealing choice. Higgins—who said he was choosing between West Point and Harvard as a high school senior—said that he has been surprised by the opportunities he has had to interact with top members of the military through Harvard’s graduate schools.

“When I was a high school senior I didn’t understand what a great breeding ground Harvard can be for the military,” he said.

But members of the Harvard queer community have expressed concern that the University will violate its non-discrimination policy by recognizing ROTC. Currently, the military does not allow trans and intersex individuals to enlist as it considers gender identity disorder—the psychological classification that describes transgenderism—and intersexism to be medical disqualifications. Some opponents of recognizing ROTC contend that this policy is discriminatory.

Though openly gay and lesbian individuals are expected to be able to serve after top government officials certify the repeal of “Don’t Ask, Don’t Tell,” the new policy will not apply to trans and intersex and individuals.

“Here’s the fundamental question the administration has to answer: Given our non-discrimination policy, what if a trans student wants to serve?” said Harvard College Queer Students and Allies Co-Chair Marco Chan ’11. “We all know what the outcome would be—they’d be disqualified. How does the school answer to that? How does the school answer when a student cannot join a recognized activity because of their gender identity? We can’t debate that this is a violation of our own non-discrimination policy.”

“I’m very disappointed,” added Jia Hui Lee ’12, a member of the Trans Task Force. “Now, the least the administration can do is admit that they have and will continue to ignore its trans students.”

Lee and other students plan to protest against this decision outside Massachusetts Hall tomorrow from 12:30 p.m. to 2 p.m. The agreement between the University and the Pentagon will be signed this afternoon at Loeb House.

Chan, Lee, and other student leaders met with Faust’s staff to discuss their concerns earlier this week. Both Chan and Lee said that while the staffers were very receptive to their input, they said they felt in the meeting as if the administration had already decided it was going to recognize ROTC.

“It didn’t feel like there was ground to compromise,” said Chan. “For me, that’s disconcerting.”

—Staff Writer Tara W. Merrigan can be reached at tmerrigan@college.harvard.edu.

—Staff writer Zoe. A. Y. Weinberg can be reached at zoe.weinberg@college.harvard.edu.