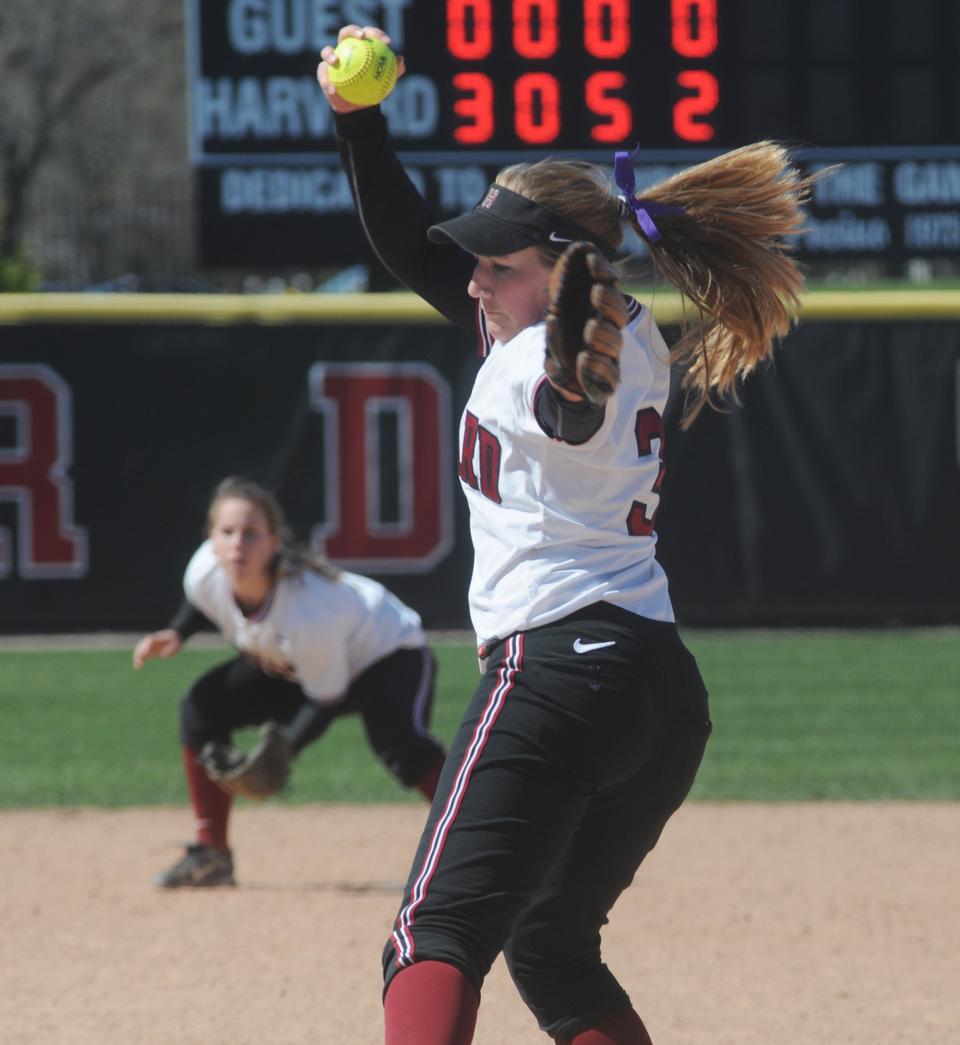 Junior pitcher Rachel Brown, shown above in earlier action, went 3-0 to start the season this weekend in the Crimson’s trip to Florida. Harvard alternated wins and losses, starting out the road trip with a win over Seton Hall, 2-0, and ending off on a good note against Providence, 4-3.
By Taryn I. Kurcz, Contributing Writer

The transition from playing indoors to playing outdoors proved to be a non-factor for the Harvard women’s softball team, who went 3-2 in its opening weekend.

“There’s no question the bubble has allowed us to be competitive in the beginning of the season,” Harvard coach Jenny Allard said. “There is definitely a little bit of an adjustment, but I thought the team really made that adjustment quick.”

On Sunday, the Crimson beat Providence in a close 4-3 matchup. Harvard came out ready to play, beginning with co-captain Ellen Macadam, who slammed an out-of-the-park home run at the first at-bat. Sophomore Ashley Heritage followed the hitting trend, putting herself in scoring position. A few plays later, sophomore Stephanie Regan flied out to right field, but her hit allowed Heritage to score, giving the Crimson an early 2-0 lead. In the third, an error from the Friars put Heritage on base again. This time freshman Kasey Lange earned the RBI with a double-base hit to right-center field, putting Harvard ahead, 3-0. Providence was relentless though, and the Friars scored three runs in the fifth inning to tie the game. The game came down to the seventh inning, when Heritage got on base again after being hit by a pitch. The next batter up, junior Whitney Shaw, hit a single to allow Heritage to score. With help from solid pitching by junior Rachel Brown, the Crimson was able get three straight outs from the Friars to seal the win.

Saturday brought both a big win and a disappointing loss for Harvard, the latter coming at the hands of Stony Brook. The Seawolves got on the board first in the opening inning, a product of four walks, the last one resulting in a free trip to home plate. Two innings later, Stony Brook junior Bernadette Tenuto gave her team to a 3-0 lead after she hit a two-run homerun to left field with her teammate, Shannon O’Shea, on base. Tenuto scored again in the bottom of the fifth inning off of a Crimson error, bringing her team’s lead to 4-0. Harvard tried to make a comeback, but it was unable to get a run. Macadam led the team with two hits out of three at-bats, followed by Regan and Shaw, who each also tallied a hit.

“We came out and attacked [Michigan],” Shaw said. “Pitching did a really great job, and defensively we played very strong and solid.”

Lange recorded an RBI when her single allowed Macadam, who originally got on base from her own double, to score. The scoring stayed quiet until the third inning when both teams had a small offensive streak. In the top of the third, the Spartans’ strong hitting led to two earned runs. Brown stopped Michigan from scoring again by striking out the last batter of the frame.

Later in the inning, with co-captain Emily Henderson on base after hitting an infield single, Shaw slammed a line-drive home run down the left-field line, taking away the Spartans’ only lead of the game. Freshman Allison Scott led off the bottom of the sixth inning with a single-run homer. Macadam followed suit, hitting a home run to left-center field. Her home run ran in freshman Shelbi Olson as well, giving Macadam an extra RBI. Before the inning was out, Henderson scored off of an RBI from Lange. Harvard’s sixth-inning power hitting was more than enough to finish off the game on top, 7-2.

The Owls had the lead the entire game, starting with two decisive runs in the first inning. The Crimson tried to come back in the third inning when Lange batted Macadam in for a score, but Florida Atlantic expanded its lead in the fourth inning with a home run from junior Carly Speerin. The last run of the day was also scored by the Owls in the sixth inning. Macadam led the Crimson in hits, batting 3-for-4, while junior teammates Shaw and Jane Alexander both had two hits.

Harvard opened up its season with a 2-0 win against Seton Hall on Friday. The game was scoreless until the fourth inning, due to a strong pitching performance by Brown, who allowed only two hits in the seven innings that she pitched. Henderson reached home plate first through an error from the Pirates’ second baseman, putting Harvard ahead 1-0. In the sixth inning, Lange earned an RBI with a double down the right-field line, allowing Henderson to score once again.

Overall, despite the two losses, the Crimson softball team is hopeful for the future.

“We had moments of greatness where we showed our capabilities and our potential,” Shaw said. “We created high expectations for ourselves after this weekend…It’s exciting because we know what we’re capable of.”