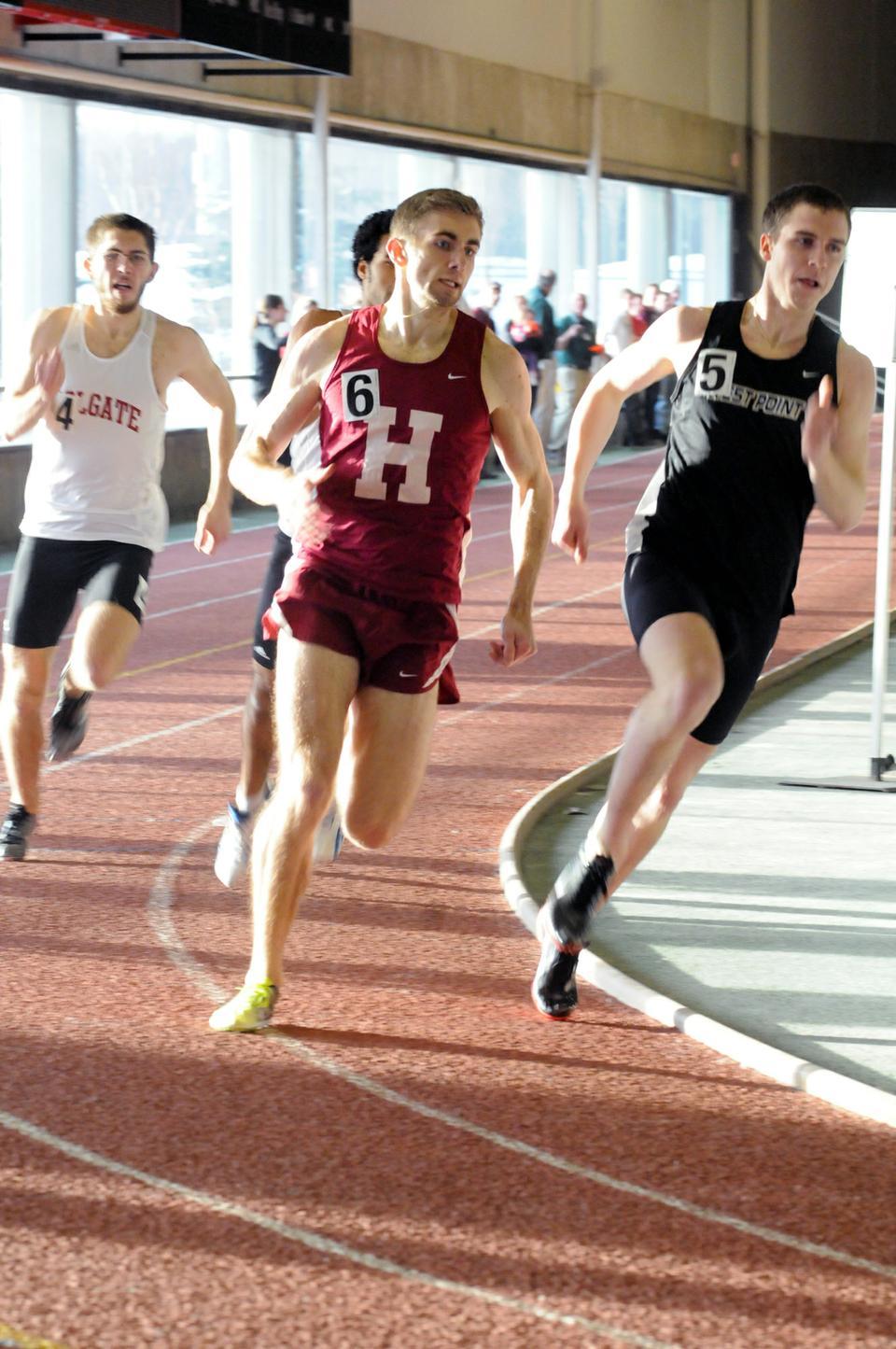 Senior middle-distance runner Brian Hill, shown above in earlier action, had an impressive showing over the weekend, posting a record time in the 800-meter event at the IC4A championships. The Crimson women finished sixth at ECACs, while the men came in 45th place at the IC4A meet.
By Cayla C. Calderwood, Contributing Writer

Over the weekend, the Harvard men’s and women’s track and field teams participated in the ECAC meet at the Reggie Center in Boston and in the IC4A championship at Boston University’s Track and Field Pavilion. The Crimson impressed, setting two school records, one in each competition.

“It was great,” Crimson Coach Jason Saretsky said. “I saw two school championships at two different meets, within twenty minutes of each other.”

Overall, the woman’s team, led by May’s performance, took third at the ECAC Championships. May took first in the 1000-meter run with a record-setting mark of 1:49.65.

“It feels really amazing…to leave a mark,” May said. “I’ve had my eyes on that record since I’ve been a sophomore, so it’s great to get it in my last indoor race.”

“The relays are something we take a lot of pride in; it’s a great example of our depth,” Saretsky said. “It’s something that our student-athletes rally around. They get excited about being able to compete for their teammates.”

The day’s success on the track was completed by freshman sprinter Meisha Brook’s third-place finish in the 400 with a time of 56.06.

Despite having only two jumpers qualify for the ECAC championships, the women still had a strong showing in the field events. On Saturday, sophomore Olivia Weeks came in seventh in the long jump with a mark of 18’7” and went on to place 22nd in the triple jump the following day with a mark of 37’8”. Meanwhile, fellow sophomore Mary Hirst took 17th in the high jump on Saturday with a jump of 5’5”.

“Overall, it was a really great weekend,” May said. “[We were] coming off the Ivy League championships last weekend, and it feels good to keep the momentum going.”

Meanwhile the men placed 45th at the IC4A championships at Boston University’s Track and Field Pavilion. Although the Crimson men were missing their throwers—coach Catherine Grace Erickson’s chose to rest her squad for the outdoor season rather than have the throwers compete in the meet—the Harvard men nonetheless showcased some strong individual performances.

Following Hill’s record-setting performance on Saturday in the preliminaries for the 800 meter, he would take ninth in the finals with a time of 1:53.43.

“It feels great [to get that record],” Hill said. “I’m happy to have made my mark on the board. It’s a good way to see where you are as we move forward into the outdoor season.”

“It was great to see him get that feather in his cap,” Saretsky said.

The Harvard men’s relay team also put points on the board by taking sixth in the 4X800 with a time of 7:36.39, while sophomore pole vaulter Fedor Garin rounded out the Crimson’s showing with a ninth-place finish (15’7’’) in the pole vault.

“[It was] just a great way to end our indoor season,” Saretsky said. “It gives us some great momentum heading into the outdoor season.”