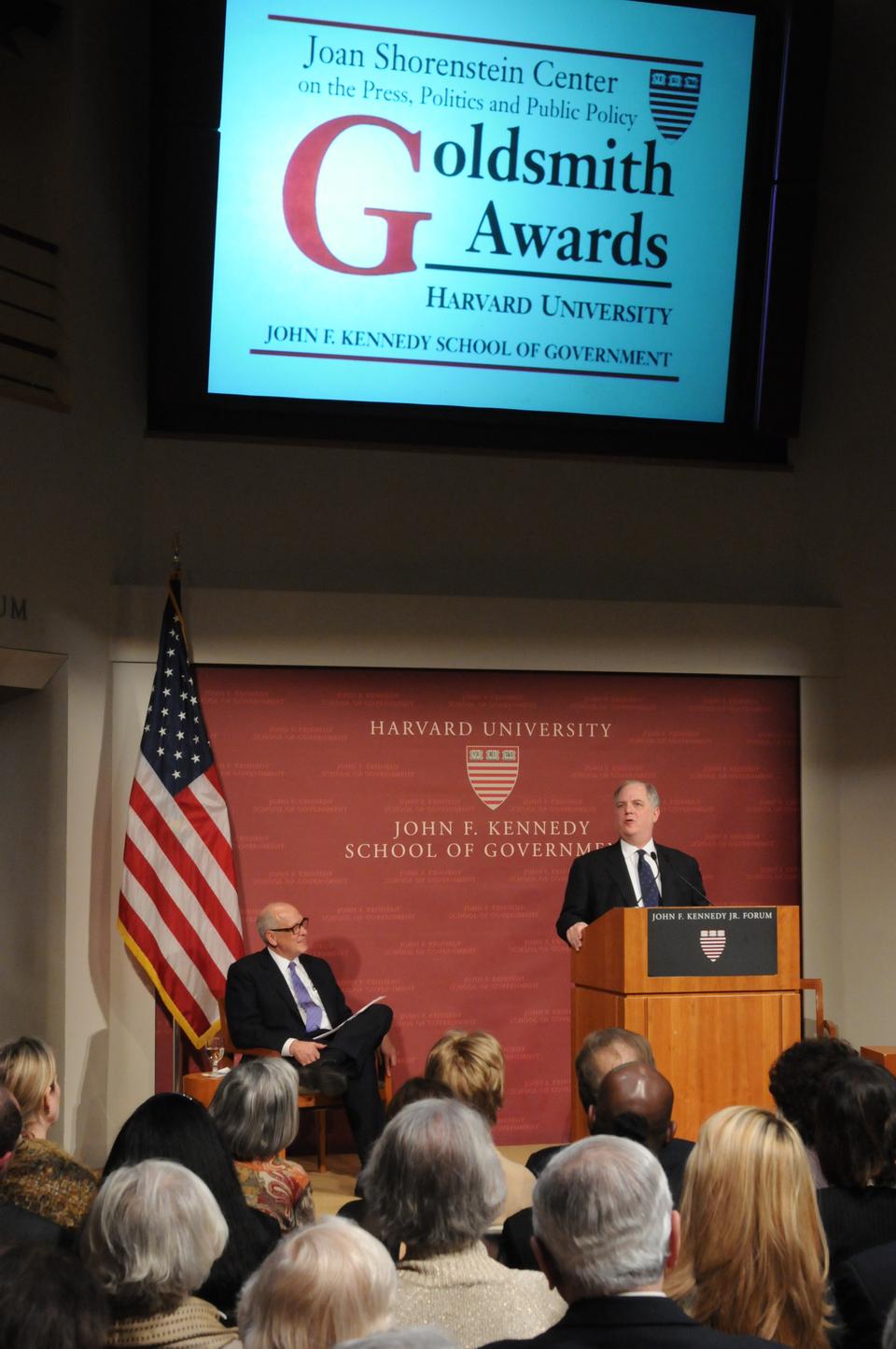 Frank Rich '71, longtime columnist for the New York Times who recently announced he is moving to New York Magazine, answers audience questions after receiving the Goldsmith Career Award for Excellence in Journalism at the Kennedy School.
By Hana N. Rouse, Crimson Staff Writer

New York Times columnist Frank Rich ’71 said professional journalists will continue to be important despite changing forms of media at yesterday’s ceremony for the Goldsmith Awards in Political Journalism.

Rich, who received the Goldsmith Career Award for Excellence in Journalism at the ceremony, acknowledged that the advent of web-based media has created “business riddles” that future generations will have to solve.

“The answers will not come overnight,” Rich said. “There will be much trial and error and some journalistic institutions will suffer, as many already have.”

He said that the value of journalism lies in its quality and in the depth of professional reporting, dedicating his award to “the many more journalists that will be accepting this honor in years to come.”

The former chief theater critic for The New York Times, Rich became an op-ed columnist for the paper in 1994. He announced last week that he is leaving the Times this June to become an essayist and editor-at-large for New York Magazine.

Rich, a former Crimson editorial board chair, brought up his time at Harvard and said his journalistic career began blocks away from the JFK Forum, where the event was held.

He said that even during his college years, journalism was an evolving field.

“Back when I was on The Crimson we were determined to reinvent journalism too,” Rich said.

But he said the modern collegiate newspaper has changed since his time.

“I don’t think it occurred to any of us that there would ever be newsrooms without typewriters and the acid smell of ink and clouds of smoke,” he said.

He brought up the achievements of fellow Crimson editor Michael E. Kinsley ’72, a former Crimson vice president, as an example of the changing status of media. Kinsley started his career in print journalism, moved on to televised political punditry, and eventually founded “Slate,” an online magazine.

“It’s nice to be at the set of ‘The Social Network,’” Rich said at the start of his speech.

The Goldsmith Awards in Political Journalism, given by the Kennedy School’s Joan Shorenstein Center on the Press, Politics, and Public Policy, annually recognizes authors of academic books and investigative journalism pieces for literary and journalistic achievements.

Six finalists were recognized for their achievements in investigative reporting. The Las Vegas Sun’s Marshall Allen and Alex Richards won the $25,000 Goldsmith Prize for Investigative Reporting for an expose revealing the prevalence of preventable diseases and injuries in Las Vegas hospitals.