Crimson Has No Answers Against Visiting Tigers 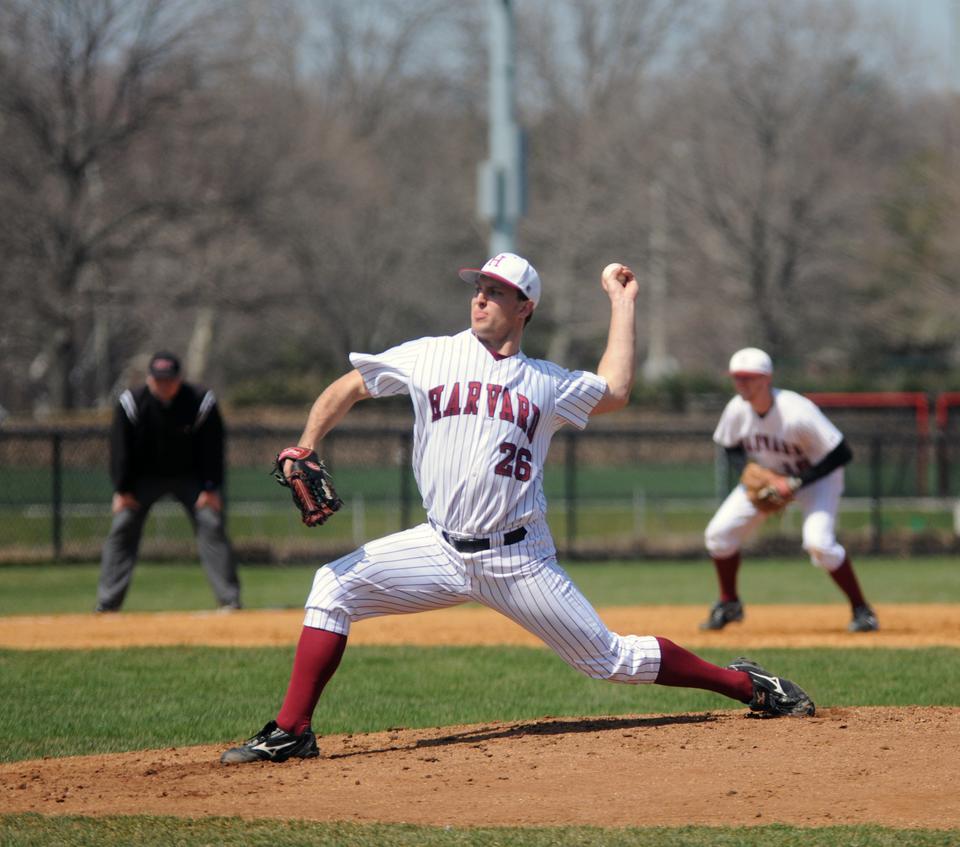 Senior Eric “Boomer” Eadington took the loss in the first game of Saturday’s doubleheader against the Tigers at O’Donnell Field. With Harvard up 3-0 through the first six innings, the senior didn’t allow a single run until the seventh, when Princeton’s Nat Baird plated teammate Mike Ford. A furious rally ensued, which saw the Tigers score five runs. By Audrey I Anderson
By Taryn I. Kurcz, Contributing Writer

Six lefts made two rights for Princeton (12-13, 6-0 Ivy), who beat the Harvard baseball team (3-23, 0-6) in both games on Saturday at O’Donnell Field. The Tigers, who had six left-handed batters, won the pitching battles that were Saturday’s contests.

Senior Max Perlman got off to a rocky start on the mound during the second game of the day, walking the first batter and hitting a couple of others in the first and second inning.

The Tigers found home plate first in the third inning. A sacrifice fly ran in a runner at third base, making the score, 1-0.

After the Crimson went three-and-out in the bottom of the third, Perlman stepped up his pitching. In the next three innings, he struck out three batters and allowed only one hit. Because runs were so sparse, Perlman’s pitching delivered in the clutch.

Harvard’s lone run came in the bottom of the fourth. Junior second baseman Jeff Reynolds hit a double to get on base and advanced to third after his teammate grounded out. While Reynolds attentively waited at third, Princeton sophomore Zak Hermans threw a wild pitch that scooted past the catcher. Reynolds capitalized on the opportunity and tied the score, 1-1.

The bottom of the fifth saw unexploited scoring opportunities for Harvard. With two outs and a runner on first, junior J.T. Tomes hit a fly ball between the shortstop and third baseman. The Tigers were unable to communicate, and the two Old Nassau players’ gloves collided, allowing the ball to drop and Tomes to reach first base safely. After another walk, the Crimson loaded the bases.

Senior center fielder Dillon O’Neill stepped up to the plate, but his contact flew straight down the third base line, and Tomes was out at third on a fielder’s choice.

Princeton’s winning runs came in the top of the seventh. Freshman Bobby Geren singled to center field and continued to second after a sacrifice bunt by his teammate. Sophomore Matt Bowman, who pitched the first game, hit a ball to center field that got him to first and Geren to score what ended up being the game-winning run. Bowman advanced to second after the next batter got on base from a hit-by-pitch. A double from junior Sam Mulroy ran Bowman in for the score, putting the Tigers up, 3-1.

With two runners in scoring position, Harvard looked towards its bullpen and brought junior Will Keuper in to relieve.

“The pitch count in the first couple innings kind of caught up with [Perlman] in the seventh,” Crimson coach Joe Walsh said.

After the switch to Keuper, the next two batters struck out and grounded out, respectively.

With help from two doubles by freshman Jake McGuiggan, the Crimson was able to get on base in each of the last three innings. But the runners on base were never to any avail, and no Harvard player could find a way to run all of the bases.

“We just never seemed to get that clutch hit, and we didn’t have a chance for a squeeze all game,” Walsh said. “We had that two-run deficit in the ninth, which made it a little bit tougher [to squeeze].”

Both teams displayed strong pitching in the first game, but the Crimson struck gold first.

Following a single up the middle from senior shortstop Sean O’Hara in the second inning, junior Marcus Way slammed a homer over the right-field fence. The two-run home run put Harvard on top, 2-0.

The next time the batting order came around, the O’Hara-Way combination struck again. With O’Hara on base, Way hit a double to left-center field that sent his teammate home. Way’s clutch hit and O’Hara’s score in the fourth inning helped the Crimson move ahead even further, 3-0.

Senior Eric “Boomer” Eadington pitched Harvard through the next couple innings, striking out two batters and allowing no runs.

But in the seventh inning, the Tigers attacked. They got a rally going and ended up scoring five runs, the last two of which were a result of a dropped fly ball.

“You have to give them credit,” Keuper said. “They forced us to make good pitches and they capitalized on our mistakes.”

Harvard tried to make a comeback, but the pitching of Princeton’s Bowman, who pitched eight strikes in 11 pitches during the bottom of the ninth, was too strong.

“Bowman came out after they scored five runs and just up-ed it a notch,“ Walsh said.

The Crimson’s losses were hard-fought battles and rough ones to lose, but the players still stay optimistic.

“We can take out of the games that sometimes losing is a good thing,” Keuper said. “It’s been a tough season so far, but I think we can bounce back. I mean, there are a lot of positives: timely hitting, timely pitching. We just need to string them together, and I think we’ve shown that we can do that to ourselves.”