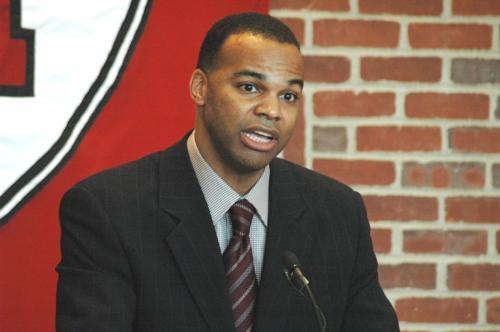 Officials from the University of Miami reportedly flew to Boston today to speak with Harvard men's basketball coach Tommy Amaker about their coaching vacancy.
By Scott A. Sherman, Crimson Staff Writer

According to a report published on ESPN.com, University of Miami officials flew to Boston today in an attempt to woo Harvard men’s basketball coach Tommy Amaker to the school.

The Miami Herald stated today that Amaker “appears to be UM’s top target.”

The paper reported that the University had made Amaker a five year offer worth $1.1 million per year. The coach had signed a multi-year extension to remain at Harvard in 2010.

On Sunday afternoon, The Herald reported that an announcement on Miami’s new coach could come as early as today.

Harvard Nichols Family Director of Athletics Bob Scalise could not be reached for comment, and team spokesperson Tim Williamson had no comment.

The Boston Globe’s college sports blog was unable to reach Amaker but stated that “sources at Miami and Harvard said that Amaker was considering what he felt was a serious offer to become the Canes’ next coach.”

The blog added that Amaker was not yet certain of what he was going to do, and that Harvard sources told the paper that though there is no time frame for a decision by the coach, it is possible that a deal could be completed in the next few days.

Amaker has often spoken of his desire to build the Harvard program in the long term and return the Crimson to the NCAA tournament, which it has not made since 1946.

In just four years, he has led a team that was 8-22 in Amaker’s first season into one of the best mid-major teams in the country. With no seniors departing from the squad that won a share of its first-ever Ivy League championship in 2010-11, the Crimson is expected to be the heavy favorite to win the Ivy League next season.

But the opportunity to return to coaching in the ACC, a Bowl Championship Series conference—where resources for recruiting and athletic facilities are greater—could be a big draw. Amaker has previously coached in the Big 10 as Michigan’s head coach and the Big East as Seton Hall’s head coach, as well as in the ACC as an assistant at Duke.

Miami finished the 2010-11 season with a 21-15 record, including a 6-10 mark in the ACC. Like the Crimson, the Hurricanes earned a bid to the NIT tournament, where they lost in the quarterfinals before head coach Frank Haith was hired by the University of Missouri.